Please ensure Javascript is enabled for purposes of website accessibility
Log In Help Join The Motley Fool
Free Article Join Over 1 Million Premium Members And Get More In-Depth Stock Guidance and Research
By Alex Planes - Feb 25, 2014 at 11:41AM

The world's largest soft-drink company has helped create a lot more consumer history than you might think.

The Dow Jones Industrial Average (^DJI 0.08%) refuses to let bad weather keep it down -- it had nudged 16 points into positive territory shortly before 1 p.m. EST as investors ignored the slight dip in consumer confidence to key in on an as-expected rise in the Case-Shiller home price index. Consumers were still fairly confident this month, as a 78.1 reading is among the highest figures since the end of the recession in 2009. Leading the Dow higher today is consumer stalwart Coca-Cola (KO 0.19%), which has been convincing thirsty people to buy sugar water for more than 100 years.

You probably know that Coca-Cola is the largest soft-drink manufacturer in the world, but the company has been around for so long that many investors may only know in bits and pieces of its rich history. Let's take a look at some of the most notable (and fun) facts about Coke:

Coca-Cola was invented in 1886 by Atlanta pharmacist John Pemberton. Pemberton advertised Coca-Cola in the local Atlanta Journal a mere three weeks later, but his lack of business acumen led to his loss of the company and formula to businessman Asa G. Candler, who incorporated the modern Coca-Cola in 1892.

Candler's $2,300 investment to gain control of Coke was rewarded by a $25 million buyout in 1916, for a return of more than 1 million percent in just 24 years. Candler sold the company to concentrate on his political ambitions -- he served as Atlanta's mayor from 1916 to 1919.

Coke's IPO in 1919 produced a market cap of roughly $30 million, which gave the company a microscopic P/E of roughly 3.3 based on $9 million in pre-tax profit that year.

Coke's stock gained 1,000% between 1919 and 1931, despite enduring the final two years in one of the worst bear markets in history. The company helped create the modern depiction of Santa Claus in 1931 -- it's no coincidence that the Santa you're familiar today with wears the same shade of red as the iconic Coke logo. 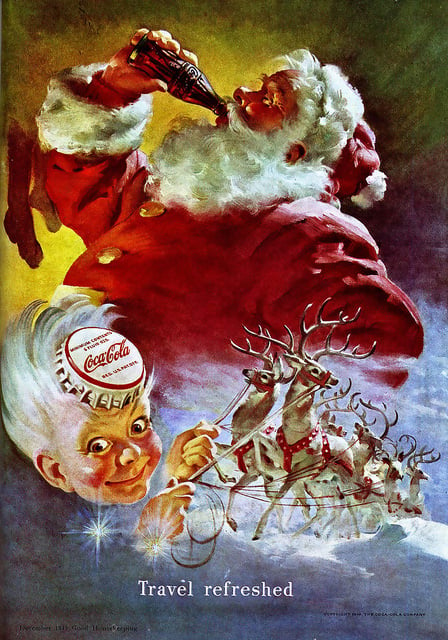 Coca-Cola is partly responsible for the existence of PepsiCo (PEP 0.21%). The modern PepsiCo was created when a candy-store entrepreneur bought the assets of a bankrupt Pepsi to obtain lower-cost cola syrup -- Coke executives' refusal to give him a wholesale discount wound up creating its greatest global rival.

Thanks to the marketing brilliance of post-IPO President Robert Woodruff, the phrase "Coca-Cola" is now the second most widely understood term in the world, behind "OK." One of his smartest moves was to ensure that every American soldier in World War II had a supply of Coke -- the worldwide presence of Americans in the war helped spread awareness far beyond what the company might have accomplished through simple marketing tactics.

World War II also led to the invention of Fanta, as Coke's German subsidiary had to find a workaround for the obvious difficulties of importing American-made products. The Fanta formula (and its profit) returned to Coke after the war ended.

Coke actually joined the Dow in 1932, but was removed in 1935. Its readdition in 1987 marked the longest absence for a two-time component in the index's history, and the Dow missed out on incredible gains -- from 1931 to 2011, Coke shareholders earned a 2.1 million percent return on their investment, if they reinvested all their dividends. Those dividends have increased every year for the past 51 years.

Today, roughly 3% of all the beverages consumed worldwide are Coke products -- almost 10,500 Coke-owned soft drinks are consumed every single second. You might pick one up from a Coke vending machine -- there are more than 2.8 million of them in the world .

Coke has as portfolio that exceeds 3,500 products across more than 500 brands. If you tried a new one every day, you'd take more than nine years to try them all. However, Coke didn't introduce a "diet" brand until 1982, when it launched Diet Coke -- now the second best-selling soft drink in America.

There are 15 different Coke soft drink brands that generate more than $1 billion in annual revenue. Coke spends heavily to promote them -- the company's advertising budget is roughly $3 billion a year.