Natural gas prices have reached their highest level in years, due mainly to the colder than normal weather and the very low storage levels. Looking forward, will the price of natural gas change direction anytime soon? And how will high prices affect the performance of producers like Devon Energy (DVN -2.79%)?

Natural gas continues to heat up
The recent rally in the price of natural gas is mostly related to the sharp rise in the demand for natural gas for heating purposes due to the colder than normal weather mainly in the Northeast and Midwest. For the 2013-2014 winter, the Energy Information Administration expects natural gas consumption for heating will be 3.3% higher than last year's winter. Further, the U.S. average heating degree-days, which measures the demand for energy needed to heat a building, will be 3.8% higher this winter than last year's. Thus, the sharp rise in the demand for natural gas in the residential and commercial sectors has led to high extractions from natural gas storage.

The chart below shows the changes in the natural gas storage and the weekly price of natural gas in the past several years. 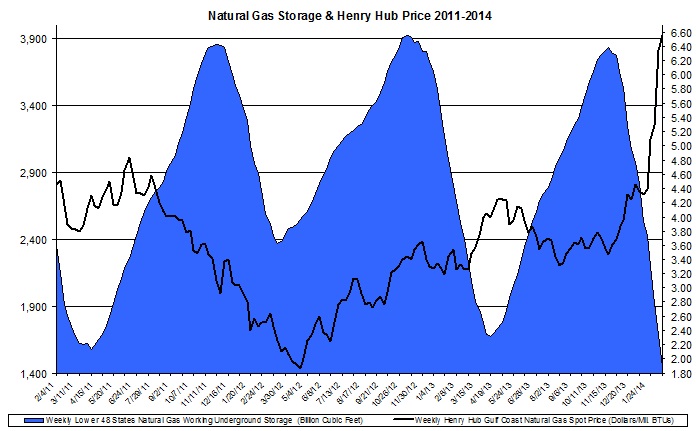 Due to the recent developments in the natural gas market, the Energy Information Administration revised up its estimates for 2014 and predicts the price of natural gas will reach an annual rate of $4.17/ MMBtu -- roughly 12% higher than in 2013. The EIA also expects the natural gas production will increase by 2.2% during the year. Consumption is projected to rise to 70.2 Bcf/day in 2014. In the coming weeks, as temperatures start to pick up, the demand for natural gas in the residential and commercial sectors is likely to decline. Moreover, the sharp rise in the price of natural gas is likely to cut down the demand for natural gas in the power sector.

Investors in the natural gas ETF United States Natural Gas (UNG -10.38%) will only partly benefit from the rally of natural gas mainly due to contango in the natural gas market, in which the prices of long-term future contracts are higher than short-term future contracts. The contango in this market tends to reduce this ETF's value compared to the price of natural gas. A more detailed explanation can be found in a recent article I wrote on this issue. The contrast between the performance of UNG and the price of natural gas is visible in the following chart, in which prices are normalized to the beginning of the year. 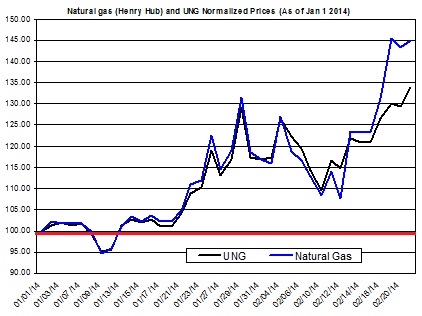 The chart shows the prices of UNG and natural gas have parted ways in the past several weeks. This occurrence tends to develop during the winter when the Henry Hub price spikes due to sharp changes in supply and demand. Over a longer period of time, this gap is likely to further widen. Therefore, investors should be advised to consider this issue when they consider going long on natural gas with UNG during winter time. Another way to benefit from the recovery of natural gas that avoids this issue is investing in natural gas producers such as Devon Energy.

The company's decision to acquire GeoSouthern Energy's assets in Texas' Eagle Ford shale for $6 billion in cash back in November 2013 is expected to further increase Devon Energy's oil and NGL production in the coming years. This decision could also reduce the company's exposure to the changes in the natural gas market. Nonetheless, the recent jump in the price of natural gas is likely to be reflected in higher revenue in the first quarter of 2014.

Final note
Natural gas is likely to remain at its current high level in the near future. But once temperatures pick up in March-April, prices should come down. Finally, on an annual scale, natural gas is expected to be higher than in 2013, which would benefit producers.

Lior Cohen has no position in any stocks mentioned. The Motley Fool owns shares of Devon Energy. We Fools may not all hold the same opinions, but we all believe that considering a diverse range of insights makes us better investors. The Motley Fool has a disclosure policy.