The Dow Jones is higher today as new home sales came in at a five-year high.

There was one U.S. economic release.

Most reports on the housing market for January came in well below expectations given the extreme winter weather in the month and the relatively high (at least compared to last year) interest rates. Today, however, the Census Bureau revised December new home sales to a seasonally adjusted annual rate of 427,000, up from the originally estimated 414,000. January new-home sales came in at a whopping 468,000, the highest level since July 2008 and well above analyst expectations of just 405,000. You can see the trend below, though the chart has yet to be updated. 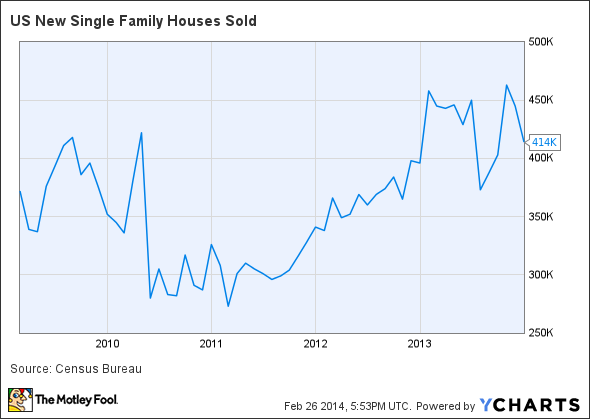 Given the positive housing news and yesterday's better than expected earnings, it's no surprise that Home Depot (HD -0.33%) is again leading the Dow Jones upward today, up 1.5% to $82.24. Also pushing Home Depot higher today is the home improvement retailer's main competitor, Lowe's (LOW -0.75%), which is up 6.3% to $51.16 after reporting better than expected quarterly earnings. Lowe's earnings excluding one-time items met analyst expectations of $0.31 per share; without the exclusions earnings were $0.29 per share. Revenue was also right in line with analyst expectations at $11.66 billion for the fourth quarter, up 6% from the year-ago $11.05 billion. Lowe's also announced a new $5 billion stock buyback program aimed at returning value  to shareholders. For 2013, Lowe's earned $2.14 per share for a trailing P/E ratio of 23.8. The company forecasts this year's earnings to be roughly $2.60 per share, implying a forward P/E of 19.5.

Dan Dzombak can be found on Twitter @DanDzombak or on his Facebook page, DanDzombak. He has no position in any stocks mentioned. The Motley Fool recommends Home Depot. We Fools may not all hold the same opinions, but we all believe that considering a diverse range of insights makes us better investors. The Motley Fool has a disclosure policy.

Chinese Stocks Are Soaring. Here's Why.

A Recession Could Be Inevitable. Don't Panic -- Do This Instead.