Is Silver Wheaton still an investment worth considering?

Silver Wheaton (WPM -3.69%) has benefited from the recent recovery of silver prices as shares of the company have rallied by more than 26% year to date. Until the company releases its fourth quarter earnings report and 2014 guidance at the end of March, let's examine what Silver Wheaton's investors should expect from the company in 2014. Let's also compare its current valuation to other precious metals streaming and royalty companies such as Franco-Nevada (FNV -1.78%) and Royal Gold (RGLD -1.75%). 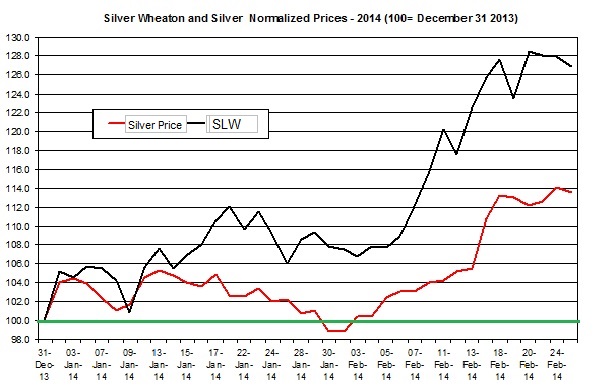 Higher production in 2014
The company has yet to release its guidance for 2014, but due to its decisions in 2013, the company's production is likely to rise again this year. Specifically, Silver Wheaton acquired the Salobo mine in Brazil and the Sudbury mine in Canada at the beginning of February 2013. This year, unlike last year, they will produce for Silver Wheaton for a full year. Silver Wheaton's management also believes these mines have the potential to increase their yield in the coming years.

The company also purchased from Hudbay Minerals 50% of the life of a gold producing mine from the Constancia Project at the beginning of November 2013. These purchases will increase Silver Wheaton's gold production and thus may improve its precious metals mix.

This difference also has an effect on profitability. For example, in 2013 Silver Wheaton's operating profit margin was 56%, Royal Gold's was 50%, and Franco-Nevada's was 48%. These differences in margins are mostly because silver tends to be more profitable than gold for streaming companies, which could translate to higher dividends for investors in silver producers.

Therefore, investors who seek to add silver to their portfolio might be better off considering Silver Wheaton rather than silver ETFs such as iShares Silver Trust.

Final note
The silver rally has helped pull up shares of Silver Wheaton, and the company has higher operating profit compared to other precious metals royalty and streaming companies. On top of this, Silver Wheaton's potential rise in production in 2014 is likely to further contribute to improving its valuation.