The inflation rate most widely followed is the consumer price index, but the personal consumption expenditures index is what you should be following.

Every month the media fawns over the consumer price index. But the personal consumption expenditures, or PCE, inflation rate is what you should be paying attention to. It's the measure the Federal Reserve follows for economic policy, and it's updated to reflect consumer spending more frequently than the consumer price index, making it a better measure of real-time inflation.

What is inflation?
Inflation is the rate of increase in the prices of goods and services, and it's reported as a percentage change. As prices increase, the "purchasing power" of your money decreases -- i.e., your money is able to purchase less. While the PCE inflation rate is reported monthly, economists generally look at the change over 12-month periods, as the month-to-month data can be noisy.

Personal consumption expenditures inflation rate
The personal consumption expenditures inflation rate is reported each month by the Bureau of Economic Analysis as part of the Personal Income and Outlays report; a full schedule of future release dates can be found here. The PCE is meant to be one of the most accurate measures of inflation, because it updates the goods and services that it measures monthly. The Federal Reserve generally targets annual inflation of 2%. Lately, though, inflation has been running well below the Fed's target. 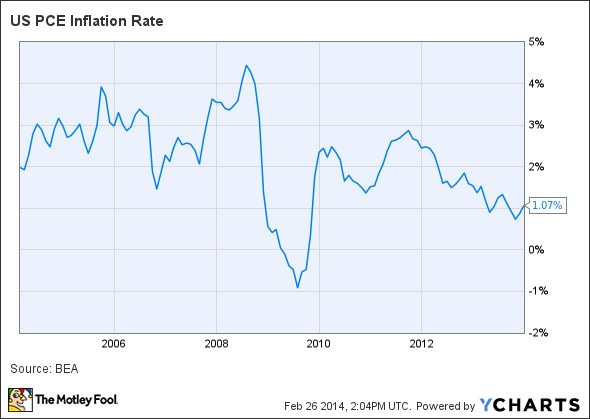 Inflation is dangerous, as it eats away at investors' hard-earned savings; each year, your dollar is worth less as prices rise. While inflation hasn't been much of an issue the past few years, older U.S. investors still remember the damaging effects of inflation when it was much higher. 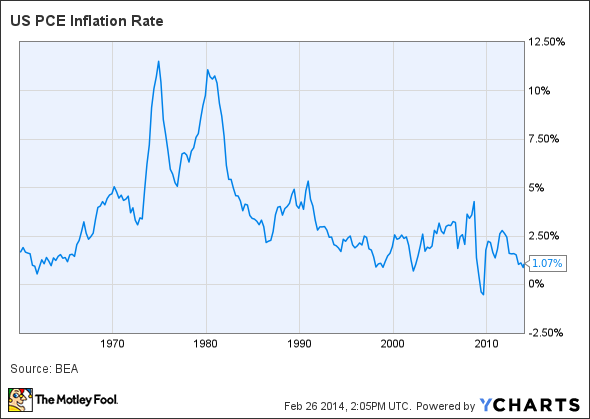 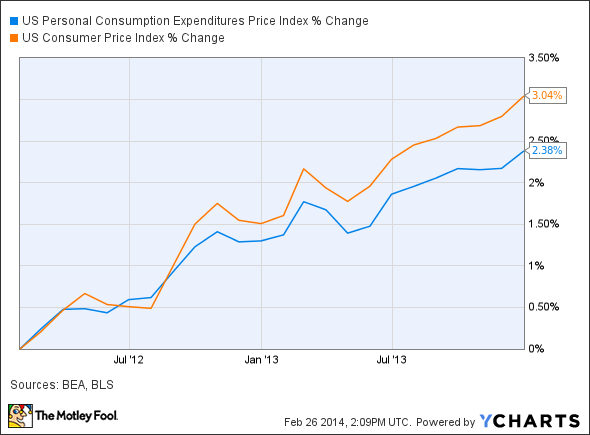 While it may not seem like much, if Social Security benefits or Treasury inflation-protected securities were indexed to the PCE instead of the CPI, it would mean billions less for the holders.

Importance
Besides providing a more accurate view of inflation, the PCE inflation rate is also one of the three key variables that the Federal Reserve is watching as it continues the drawdown of its quantitative easing and decides what to do with the federal funds rate. The other two are economic growth and the level of unemployment. As part of the Fed taper goes, the Fed has said it is aiming for PCE inflation of 2% to 2.5%. The PCE inflation rate has been half that level, worrying some that deflation could become a problem going forward. This is a problem that Europe is beginning to see.

How to protect yourself
Education is half the battle -- learning about the factors affecting markets and thereby you. The other half of the battle is how you invest both your time and your money.

Dan Dzombak can be found on Twitter @DanDzombak, or on his Facebook page, DanDzombak. We Fools may not all hold the same opinions, but we all believe that considering a diverse range of insights makes us better investors. The Motley Fool has a disclosure policy.