Please ensure Javascript is enabled for purposes of website accessibility
Log In Help Join The Motley Fool
Free Article Join Over 1 Million Premium Members And Get More In-Depth Stock Guidance and Research
By Pratik Thacker – Feb 27, 2014 at 10:09AM

Will Las Vegas Sands' growing presence in Macau and a great quarter combine to make it a rewarding investment?

Gaming has become an important source of entertainment and leisure for most people. This is evidenced by the growth of gaming revenue in Macau, the only place in China where gaming is legal. In the recently-ended fourth quarter, Macau's gaming industry surged 24% over last year. This means that casinos in the region are prospering, as they are benefiting from this upsurge.

The most prominent U.S. player in Macau is Las Vegas Sands (LVS 0.26%), which is making big bucks as people flock to the region to splurge. It recently reported its fourth-quarter results, which saw strong growth in Macau. Also, its earnings came in ahead of the Street's expectations.

However, the company witnessed improvements in hotel room rates as well as occupancy room rates, which partly offset the revenue decline from the region. Moreover, the Singapore economy contracted by 2.7%, on an annualized basis, for the fourth quarter. The contraction was because of weak manufacturing activity, leading to lower gaming revenue.

Nonetheless, Las Vegas Sands managed to boost its top line as well as the bottom line. Earnings surged 32% to $886 million as compared to the year-ago quarter, beating estimates. Although the Singapore business was a drag, both Macau and Las Vegas witnessed growth.

Las Vegas, which comprises 10% of total revenue, witnessed 72% growth in casino revenue and 21% growth in food and beverages; room revenue inched up a slight 5% over last year.

Even peer Wynn Resorts (WYNN -0.57%) witnessed an increase in revenue from Macau. In its recently reported fourth quarter, Wynn Resorts registered growth of 24.6% in revenue from Macau operations, hitting $1.1 billion. Also, the company posted a jump of 92% in total earnings for the quarter, as it benefited from more slot machines and table games.

Also, there was an increase in occupancy as well as average daily rates over last year. Hence, Wynn Resorts plans to expand in China by investing another $1.5 billion in Everett. This is in addition to its new property in Cotai, which is expected to open by 2016. 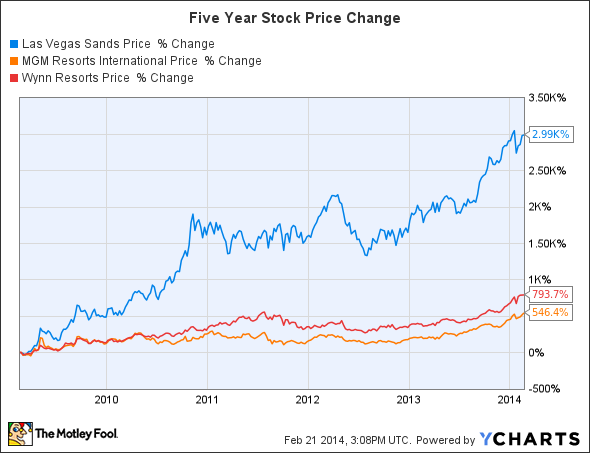 A growing presence in the Macau region has helped Las Vegas Sands perform well and delight its investors. Also, an expansion into the mass market, catering to the middle class population, enabled the casino-chain operator to cater to a wide demographic. In fact, revenue from its mass-market customers increased a whopping 58% over the fourth quarter of 2012 to $1.2 billion. Also, it has the largest proportion of mass-market gamblers in Macau, as pointed out by an analyst at Morgan Stanley.

On the other hand, MGM Resorts experienced a 4.5% decline in its mass-market revenue for the month of December. However, it has been making a number of efforts to attract customers. For example, Mlife, its customer-loyalty program, is doing well and delivering the highest room revenue to the company. This program rewards customers who use mobile technology. Also, it has recently launched a new social game on Facebook, MyVEGAS, which will further help in acquiring more customers. Hence, MGM is using such programs as promotional tools to drive its revenue.

Plenty to look forward to
Las Vegas Sands is also making a number of moves to expand its business and drive revenue higher. It has been adding hotel rooms to accommodate more people. Also, sources of entertainment such as exhibition halls, theaters, and shopping malls are being opened inside of its resorts. This should attract more customers. Moreover, there are plans to invest $2.8 billion in Cotai in order to build a Parisian resort, which should be done by 2015.

Additionally, the casino-chain operator's sixth property in Macau is under construction, which once complete will add to its growing presence in the region. In fact, the company has cancelled plans to build EuroVegas in Spain, worth $30 billion, since it wants to remain focused on its expansion in Asia.

Final Foolish thoughts
There is no doubt that Las Vegas Sands is the leading player in the casino-chain industry, with more than 1,000% returns over the last five years. It has the largest presence in Macau, the region which is eyed by every casino-chain operator. Moreover, it has been growing at a rapid pace along with expanding to attract mass-market gamblers, which has proven to be advantageous. Also, the company declared that its dividends will increase to $2 this year from $1.40 in 2013. Therefore, this company makes a compelling investment.