Shares of Verizon Communications (VZ -0.49%) were up nearly 3% just before 2 p.m.,, making the wireless carrier the strongest performer on the Dow Jones Industrial Average (^DJI -1.03%) by far. What's behind Verizon's sudden surge?

But the business impact of these tidbits is uncertain and likely quite small. Instead, the real driver behind Verizon's jump comes from a pair of big-name analyst actions.

First, Morgan Stanley resumed coverage on Verizon after a lengthy absence, tagging the stock with an overweight rating and a $52 price tag. Then, JPMorgan Chase added Verizon to its coveted focus list, just two days after it also resumed coverage with a $57 price target.

The two Morgans are market-moving powerhouses, even when it comes to big-ticket Dow components such as Verizon. These confidence-building price targets -- between 12% and 23% above this morning's opening prices -- are certainly enough to explain a 2% single-day jump.

JPMorgan likes Verizon's risk/reward profile now that the company has full control over the Verizon Wireless network, as well as its rich cash flow.

Morgan Stanley said it sees an "attractive" valuation at current prices, and agreed that Verizon's cash flows look richer now that Vodafone (VOD -1.81%) is out of the picture. "Wireless competition is a risk, but we believe that Verizon is best positioned," said Morgan Stanley analyst Simon Flannery.

Investors see these actions as a unique rash of Verizon endorsements rather than a blanket telecommunications upgrade. AT&T (T 2.24%) shares were trading up just 0.4% at press time, in line with the Dow overall.

That said, both Verizon and AT&T have trailed the Dow over the last year as the wireless market heated up. The Dow's telecom stocks look cheap from a historical perspective, largely thanks to this weak market action: 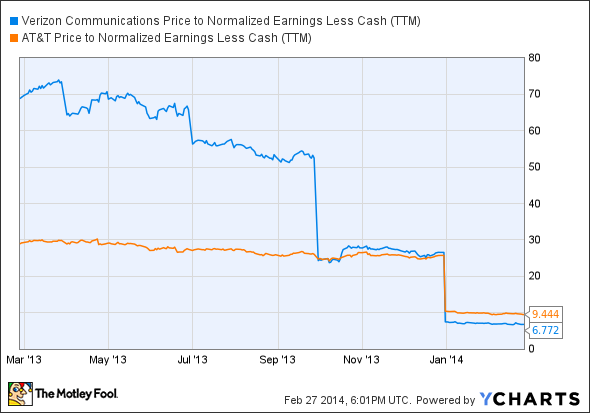 So JPMorgan and Morgan Stanley are betting that Verizon has the chops to turn the beat around, and that booting Vodafone out of the Verizon Wireless partnership was the right thing to do. For the record, both analyst firms are sticking to their hold ratings on AT&T.

As for the Fool, our Inside Value newsletter hasn't recommended AT&T since 2011, and none of our services have ever endorsed Verizon. Juicy dividends and analyst endorsements notwithstanding, I can't say that I'm sweet on either of these stocks myself.

The Vodafone deal does boost Verizon's long-term cash flow prospects, but this market is far too packed with hungry up-and-coming rivals to recommend either one of the two incumbent leaders. Today's JPMorgan and Morgan Stanley comments haven't changed my view on this.

Anders Bylund has no position in any stocks mentioned. The Motley Fool recommends Vodafone.