There were U.S. economic releases today:

The two to pay attention are the GDP revision and the pending home sales report. Today, the Commerce Department revised downward fourth-quarter real GDP annualized growth from 3.2% to 2.4%. This was in line with analyst expectations, but down from the third-quarter's peak of 4.1% growth. 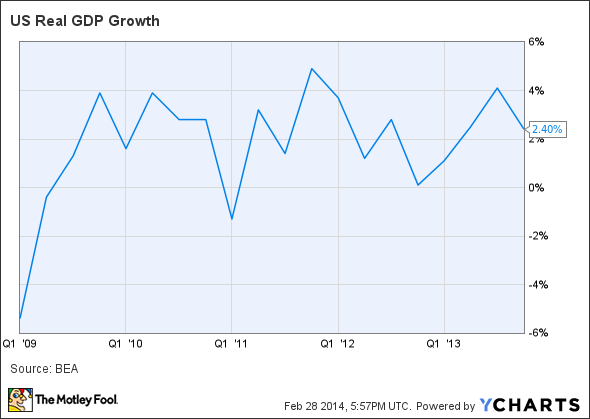 After a string of poor economic reports in 2014, the question economists are now focused on is whether the economy is slowing or is just temporarily impacted by the worst winter in years. Yesterday, Federal Reserve Chairwoman Janet Yellen addressed the question in testimony before a Senate panel: "Since my appearance before the House committee, a number of data releases have pointed to softer spending than many analysts had expected. Part of that softness may reflect adverse weather conditions, but at this point it is difficult to discern how much." We'll have to wait and see as more reports come out. Unless there is a massive change, I still expect the Fed taper to continue with another $10 billion per-month reduction of bond purchases at the next Federal Open Market Committee meeting in March. That would bring bond buying to $55 billion monthly, down from the peak of $85 billion.

Meanwhile, pending home sales moved up 0.1% month over month in January, according to the National Association of Realtors, but remained near a two-year low at a level of 95. A level of 100 equals the average level of activity in 2001. Association Chief Economist Lawrence Yun said: "Ongoing disruptive weather patterns in much of the U.S. inhibited home shopping. Limited inventory also is playing a role, especially in the West, while credit remains tight and affordability isn't as favorable as it was a year ago."

What's an investor to do?
Your investment strategy shouldn't be dependent on the latest economic releases. The story remains the same. The economy continues to slowly grow, the housing market is slowly getting healthier, and the market is still overvalued. I'm holding some extra cash, continuing to educate myself, find great companies, and invest for the long term.

Chinese Stocks Are Soaring. Here's Why.

A Recession Could Be Inevitable. Don't Panic -- Do This Instead.