Banks are often considered scary investments, but there is one bank with a great dividend that even Warren Buffett loves.

Although U.S. Bancorp is headquartered in Minneapolis -- far from the U.S.'s banking center in New York City -- it's one of the best-performing banks in the country. Like many other banks, USB has been challenged by the recent banking environment. But thanks to its conservative management and the outperformance it showed during the 2008-2009 meltdown, its clearly a bank investors can own and still sleep well at night.

Below are three reasons I believe USB is a good buy today.

1. Remarkable returns
While other banks may have seen more impressive growth in earnings -- Bank of America's net income nearly tripled last year, going from $4.2 billion in 2012 to $11.4 billion in 2013 -- this was more the result of poor prior performance for those banks, as opposed to U.S. Bancorp falling behind on "real" growth.

In a comparison against some of its peers, including Wells Fargo, PNC, and Citigroup, U.S. Bancorp delivered stunningly profitable results. Its return on assets and equity far outpaced its peers, and its efficiency ratio -- which measures the cost of each dollar of revenue -- was also best in class:

As a result, it should come as no surprise U.S. Bancorp's price-to-tangible book value -- the key metric used by investors to gauge a bank's value -- is also at the top of its peers as well. 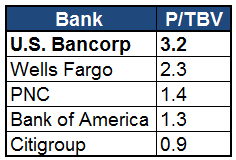 While a high valuation can be concerning, it's considerably less so when you consider that USB delivered a staggering 23% return on average tangible common equity in 2013 -- nearly double the 12.6% average of nine of its peers. These great returns give a pretty good clue as to why Warren Buffett owns $3.2 billion of U.S. Bancorp through Berkshire Hathaway.

2. Strong growth
The bank has grown its deposits by 50%, or $82 billion since 2009, and its loans are also up to the tune of $41 billion over the same time period. Above I mentioned the conservative management at USB and its performance during the financial meltdown years -- this is exactly why depositors feel safe bringing their money to the bank. And it's on the back of low-cost, stable deposits that long-term banking success is built.

In addition, the company has steadily gained market share from other banks across its business operations. One example is that in first quarter of 2007, it issued just 0.7% of the total mortgages in the U.S., but by the third quarter of 2013, that stood at 4.1%, representing remarkable growth.

3. Generosity toward shareholders
U.S. Bancorp is capable of delivering remarkable returns to its bottom line, but what makes it even better is it has every intention of distributing those earnings right back to shareholders in the form of dividends and share repurchases. In a recent presentation, the company revealed that it wants to distribute up to 80% of its total earnings to shareholders:

Yet, as you can see, those aren't simple targets the company sets to entice investors, as it delivered a 71% payout to its shareholders last year. Recently, when discussing this impressive payout, the CFO of U.S. Bancorp, Andrew Cecere, added that this was not a one-time anomaly, saying simply, "We would expect to continue on this model into 2014."

The bottom line
Although there are other companies with higher dividend payouts that appear to be better values, few can provide the remarkable business performance and commitment to return money to shareholders as U.S. Bancorp.

Warren Buffett once remarked, "It's far better to buy a wonderful company at a fair price than a fair company at a wonderful price," so knowing that he even added to his position last quarter is simply one more reason to give U.S. Bancorp great consideration.