There's a powerful belief held by many baseball fans and coaches: A team's best all-around hitter should always bat third in the lineup.

But is this strategy used in the modern-day MLB, and is the myth true?

Where does the best player bat?
In 2013, the average MLB team used more than 100 different batting orders throughout the season. The upper two-thirds of a typical batting order is reserved for everyday players, and only changes significantly if the injury bug strikes. In many cases, a team's most accomplished players stay put for an entire season, or close to it.

For example, former MVP Joey Votto hit third for the Cincinnati Reds in 161 games last season. Dustin Pedroia, who also has an MVP trophy and four All-Star appearances, was in the Boston Red Sox's number three hole for most of 2013. The same goes for Miguel Cabrera, who almost always hit third for the Detroit Tigers last year, or Prince Fielder, who hit behind Cabrera's spot in 158 of the 162 games he played.

But do teams prefer to bat their best offensive player third?

Source: Baseball-Reference. *Spots 7-9 weren't included in this analysis because of high turnover. Widely regarded as two of the most accurate offensive stats in baseball, OPS+ and oWAR measure slightly different things. The latter, a variant of wins above replacement (which is used by sabermetricians), reveals how valuable a batter is compared to a replacement level player. OPS+, meanwhile, is on-base plus slugging percentage, normalized for park factors. As CBSSports explains, OPS+ is scaled to 100, so "an OPS+ of 110...is an OPS that's 10% better than the league average; an OPS+ of 85 is one that's 15% worse."

Yes, at least on an aggregate scale. By OPS+, the typical number three hitter is 8% better than the number four hitter. Offensive WAR indicates a similar pecking order.

How much money does each lineup spot make?
Judging by these statistics, one would assume the number three hitter would have the highest annual salary of his peers. The better the player, the higher the paycheck, right?

Not quite. According to the data, the highest paid lineup spot is number four, followed by number three. The cleanup hitter was paid an average of nearly $1 million more last season.

Although this seems to contradict the first table, remember the purpose of a number 4 hitter: to drive in runs. This spot usually receives more RBI opportunities than others in the batting order, and because many "old-school" analysts remain partial to the statistic, RBIs do correlate with contract size.

Through last year, baseball's 10 highest-paid players had 10 league RBI crowns between them. Since 2000, nearly every RBI champion has been a big-contract player, except for Preston Wilson in 2003, and Chris Davis and Paul Goldschmidt this past season (both Davis and Goldschmidt should be paid handsomely in the future).

No. 19 Chris Davis of the Baltimore Orioles. Image via Keith Allison, Flickr.

As Bleacher Report's Zachary Rymer writes, "When we were kids, we all learned … that players who drive in runs are simply more valuable than players who don't." In reality, though, the MLB's most valuable players hit third -- not fourth -- and receive less money and fewer RBI chances than the guy hitting behind them.

Are some teams bucking conventional wisdom?
A growing body of research suggests the smartest move is to place your best hitter second or fourth. The number two spot usually receives 20 or so extra plate appearances per season than the number three, while the number four spot has an advantage in RBI opportunities. SBNation explains: "Because he comes to bat so often with two outs and no runners on base, the #3 hitter isn't nearly as important as we think…. This is a spot to fill after more important spots are taken care of." In essence, the number two or number four hole is a better place for a team's best player. 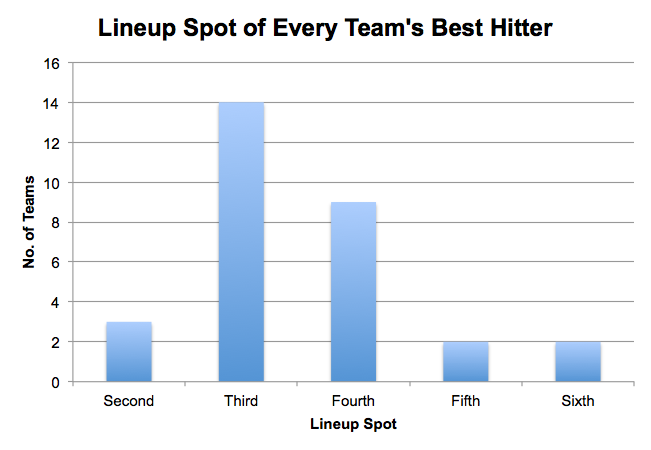 Source: Baseball-Reference. Only three teams -- the Minnesota Twins, LA Angels, and LA Dodgers -- preferred their best hitters -- Joe Mauer, Mike Trout, and Yasiel Puig --  at the No. 2 spot. Most of the rest, like Atlanta (Freddie Freeman) and Tampa Bay (Evan Longoria), who bucked conventional wisdom, chose to bat their studs fourth. A select few chose to bat their best hitters fifth or sixth -- Oakland's Josh Donaldson and Baltimore's Chris Davis are the best examples.

In terms of offensive success, the league's teams that used an unconventional batting order scored more often than their conventional peers. On average, this differential was 24 runs per team, and it was more pronounced when looking at the MLB's upper tier. Only six of the 15 highest scoring teams hit their best player third.

What's this mean for financial success?
It's been said that "chicks dig the long ball," and from an attendance standpoint, that's true. Last season, the top 15 offensive teams filled a slightly higher percentage of their seats compared to the bottom 15. Improved hitting -- typically in the form of runs scored and batting average -- has long been linked with better ticket sales, something many empirical studies have noted.

Although television contracts and team merchandise generate more revenue than ticket sales, one could argue that excitement -- a chief result of offense -- benefits all aspects of business.

The Red Sox, for example, scored 119 more runs in 2013 than in 2012, won 28 more games, captured a World Series, improved TV ratings, and is now selling more tickets than a year ago. Detroit has followed a similar blueprint in recent seasons, and it has the highest local TV ratings in baseball. Forbes estimates the team's value rose 35% last year to $643 million, while the Red Sox gained 31% to $1.3 billion in 2013.

The bottom line
A better offense doesn't guarantee financial success, but it might help. More runs can put more fans in the seats, something other sources of revenue have been linked to in the past.

Aside from simply signing better players, a large body of research and recent stats suggest an unconventional batting order -- where the best hitter doesn't bat third -- can boost run production. Although aggregate data shows the MLB still believes the myth of the number three hole, many teams have abandoned this strategy.

If more continue, it could be relegated to baseball almanacs of years past.