Here are a few reasons why Kroger looks like an attractive investment right now.

A focus on customer needs helps a company grow. An apt example for this is Kroger ( KR -1.94% ), which is enjoying the benefits of its Customer First strategy. Because of this customer-centric initiative, Kroger has been posting better results with each passing quarter.

Kroger's customer loyalty program has been a success since it offers discounts to customers on the basis of their previous shopping patterns. Also, the program helps the company understand the preferences of its customers, which was explained by Mark Lin in his recent article. Kroger's latest quarter was exceptional, with growth of 3.2% and 15% on the top and bottom line, respectively. The increase was driven by higher store traffic which led to same-store-sales growth of 3.5%, as well as efficient cost-management techniques.

On the other hand, retailers such as Target ( TGT -2.13% ) have been unable to meet top-line expectations. Target's last-quarter results didn't beat the estimates, as the company reported sales growth of 2% along with same-store-sales growth of 0.9%. Target's revenue was helped by 32 new stores and additional marketing efforts, such as its REDcard. Target also focused on weekly discounts and lowered the prices of some of its products. 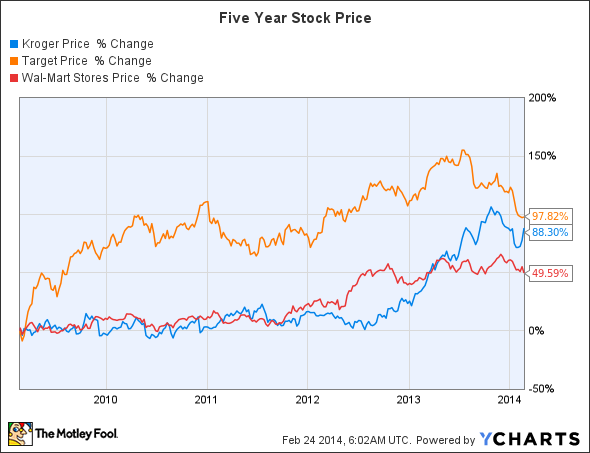 Although Target's stock price has appreciated the most, Kroger outpaced Wal-Mart with a return of 88.3% over the same period. Moreover, Kroger's performance gets more interesting when we look at its stock price movement over the last year. 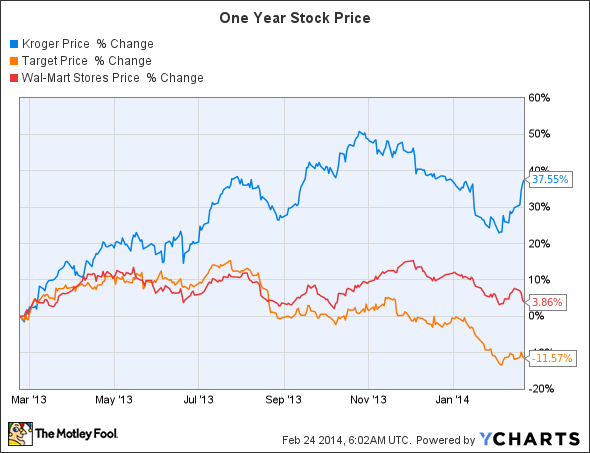 Kroger's efforts such as enhancing its product portfolio to include natural and organic food and offering discounts for loyal customers have helped the retailer register share price growth of 37.6%. On the other hand, Target's performance was slightly negative, and Wal-Mart provided a return of 3.9% during the same period.

One of the key problems Target faces is its management of costs, which is hampering its bottom line. Its earnings for the last quarter fell to $0.54 per share from $0.96 per share last year. In order to overcome this problem, Target plans to open smaller-format TargetExpress stores so that it can reach out to people in urban areas as well as reduce its costs.

Even Wal-Mart has resorted to opening smaller-format stores that are closer to cities. In fact, it plans to open 300 to 400 stores by the end of its fiscal year, expanding its small store network significantly. Also, growth in Wal-Mart's same-store sales (3.4% in its last quarter) shows that sales have been increasing at its existing stores. Therefore, expanding the store base should be beneficial for the retailer. It will be interesting to see how such expansion moves from both Target and Wal-Mart affect Kroger.

Interesting moves...
Kroger's expansion into natural foods has been quite interesting. Health-conscious customers look for healthy options at lower prices. Hence, the retailer's natural-food brand called Simple Truth, introduced in September 2012, proved to be successful. Moreover, the products are priced lower than those of Whole Foods Market, one of the leading providers of natural foods, which caters to high-end customers. Hence, Kroger appears to have done a good job of pushing organic foods to price-conscious shoppers.

Additionally, the Cincinnati-based retailer acquired Harris Teeter Supermarkets last year. This acquisition not only expanded its natural food business but also added 200 stores to its portfolio. It should grow the company's top line by another $4.5 billion per year.

Final thoughts
Kroger seems to be doing well and has outperformed other players over the last year. The inclusion of organic food in its offerings has been quite fruitful, and this should continue to benefit the retailer. Moreover, its recent acquisition and its focus on delighting its customers should lead to higher sales and greater profits.