While current Citigroup (NYSE:C) CEO Michael Corbat has been aggressive in following through with the company's strategy to globalize, optimize, and digitize, it's not his model.

In fact, former CEO Dr. Vikram Pandit explained a similar strategy using similar jargon in his 2010 and 2011 letters to shareholders. Though, I'm not sure it was fully his idea, either.

While I can't say for sure, much of Citigroup's strategy can be credited to Chairman Mike O'Neil. A name many of you may not have heard since 2011 when The New York Times suggested O'Neil was the catalyst behind the ousting of Pandit.

Before O'Neil joined Citigroup's board in 2009, he was the CEO of Bank of Hawaii. Before O'Neil, Bank of Hawaii had expanded beyond its means and was suffering. O'Neil took the reins in 2000, and by 2004, Bank of Hawaii was more efficient, more profitable, and is now considered one of the better-run U.S. banks.

His plan for turning around Bank of Hawaii was clear and effective. And if Citigroup's actions in the past two years are any indication, it seems his experience has played a major role in strengthening the company.

Today, I'll dig into four of O'Neil's steps for turning around Bank of Hawaii, as stated in his letters to shareholders, with the hopes of getting a glimpse of what the future may hold for Citigroup.

1. "Divested non-core business and sharpened our focus on key markets."
O'Neil believes it's important to both avoid markets where the business will be at a competitive disadvantage, as well as those that aren't sufficiently attractive.

This has been a major theme not only for Citigroup, but also for U.S. banks like Bank of America (NYSE:BAC) and PNC Financial (NYSE:PNC). In fact, according to SNL financial, Bank of America and PNC trimmed their branch counts in 2013 by 189 and 160, respectively.

The mixture of a weak revenue environment and an industry moving toward more ATM, online, and mobile transactions will force, or allow, banks to be more selective with branch locations.

While this will likely continue in 2014, repositioning and extreme branch cutting should start to slow down as banks establish a firm footprint.

2012 was the turning point for these banks. While all three have previously noted there's still work to be done, each made significant progress in 2013.

While being more efficient isn't quite as sexy as growing revenue, it should put all three banks in a great position to be successful when the going gets good. 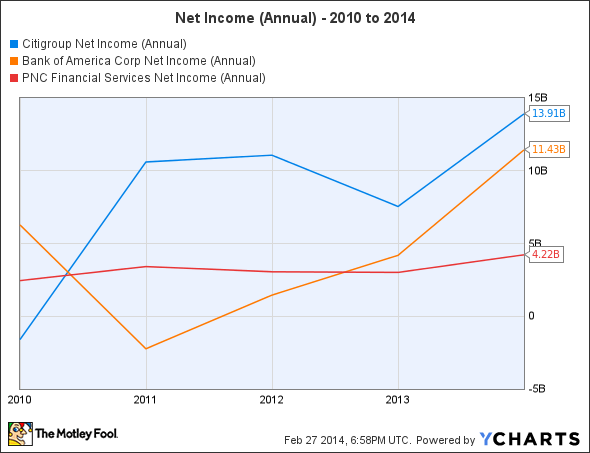 Bank of America and Citigroup have shown the most progress, though PNC did grow net income by more than one billion from 2012 to 2013.

While I wouldn't necessarily consider this step complete, these banks have delivered bottom-line growth that investors should hope to continue -- and in my opinion, will continue.

However, according to JD Power and Associates customer satisfaction survey, Bank of America and Citigroup were rated as having average consumer banking customer service. PNC was the strongest of the three in this category, rating above average.

This is something Jud Linville (CEO of Citi Cards) has said is improving, and considering the importance of branded cards to Citigroup, that will be important to watch.

What the future holds
It's clear Citigroup is wisely taking the advice of the brilliant banker behind the turnaround of Bank of Hawaii. Steps one and two seem to be well on their way for Citigroup, Bank of America, and PNC.

All three banks have made significant strides to optimize their businesses and become more efficient, and they are starting to show measurable bottom line growth.

The next couple of years will be the most telling. If the economy and the revenue environment improves, don't be surprised if Citigroup follows the advice of Mike O'Neil by more aggressively investing in its employees.