The company is appealing the Food and Drug Administration's decision to rescind the Special Protocol Assessment, or SPA, for its fish oil pill Vascepa. The SPA would allow the biotech to gain expanded approval to treat patients with moderately high triglyceride levels while waiting for an outcomes study in that population. The FDA pulled the SPA because it now wants to see the results of the outcomes study to confirm Vascepa is not only lowering triglyceride levels, but also reducing heart attacks and strokes.

Amarin is also suing the FDA over the agency's decision to only give Vascepa three years of exclusivity rather than designating it as a New Chemical Entity, which would entitle the drug to five years of exclusivity. Vascepa is a purified fish oil, but the FDA apparently decided that it wasn't different enough from GlaxoSmithKline's (NYSE:GSK) Lovaza to justify designating it as a New Chemical Entity. 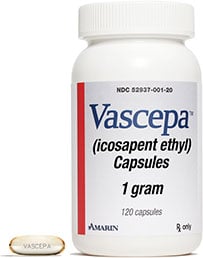 And today the company announced it's suing AstraZeneca (NASDAQ:AZN) over its fish oil pill Epanova. The pharma giant acquired the drug when it purchased Omthera Pharmaceuticals last year. Amarin claims that its patent covers "lowering triglycerides by administering a pharmaceutical composition that includes amounts of EPA [eicosapentaenoic acid] as free acid, and no more than about 30% DHA [docosahexaenoic acid]."

As best I can tell -- there's less info on Epanova because it's not approved yet -- AstraZeneca's drug fits the definition that Amarin claims to have covered. The bigger question is whether the patent is valid. In general, method of use patents like this one are a lot harder to defend than composition of matter patents.

Even if the chance for a positive outcome of each lawsuit/appeal is relatively low, it's probably worth whatever Amarin is paying the lawyers. Of course, the return on investment depends on sales of Vascepa and Epanova. Amarin has struggled to gain traction with Vascepa, selling just $10 million worth of the drug in the fourth quarter. If AstraZeneca has similar problems marketing Epanova, blocking or trying to gain a royalty on the drug won't be worth much to Amarin.