In November, it looked like Sarepta Therapeutics (NASDAQ:SRPT) had very little chance of getting an accelerated approval for its Duchenne muscular dystrophy drug eteplirsen. The company said the Food and Drug Administration did a 180, from being open to looking at the phase 2 data that might be used for an accelerated approval to questioning whether the data are enough.

After the huge drop, I recommended buying shares based on the long-term potential of the stock.

I'm beginning to think it might still have short-term potential, too.

In biotech, that's often all we've got to go on.

On its quarterly conference call last week, management said it had met with the FDA in November and December, but hadn't received meeting minutes from those meetings. Minutes from FDA meetings typically include not only what was said in the meetings, but what was agreed upon.

Having not sent the minutes implies the FDA hasn't decided anything yet. The company also said the agency has requested additional information since the meetings, supporting the notion that nothing has been finalized. Sarepta and the FDA are scheduled to meet this month to further discuss the path forward for eteplirsen.

Riling up the base
If the FDA hadn't made up its mind in November, why did Sarepta disclose that the FDA had changed its tentative opinion? You could argue the info was material, but other biotechs have certainly kept tentative information from their shareholders until a final decision was made.

My guess is management decided it was worth sacrificing short-term share price to let its supporters know which way the FDA was leaning, so its supporters could lobby the FDA. Parents of boys with Duchenne muscular dystrophy have made it clear they want the drug available despite the lack of robust data; given the fatal nature of the disease, I would too. Shareholders obviously want the drug approved, and while the FDA could care less about shareholders, they can claim to be concerned citizens, signing petitions like this one. (Note: Shareholder and concerned citizen aren't mutually exclusive; many -- hopefully most -- shareholders care as much about treating an unmet need as they do about making money off it.)

Public opinion is never going to trump science, but science is often not black and white. When it falls in the gray area -- like it has for Sarepta's seemingly strong but small data set -- a little pressure from the public could push the agency toward approval. It certainly couldn't hurt.

Similar risk, cheaper price
While investors are in a better position than if the FDA had made up its mind about an accelerated approval for eteplirsen, there are no guarantees that this will end in Sarepta's favor. The default pathway is for Sarepta to run a larger phase 3 trial, which would likely delay an approval by at least a year, probably more.

Essentially, we're back where we were in November. Except the share price is substantially lower. 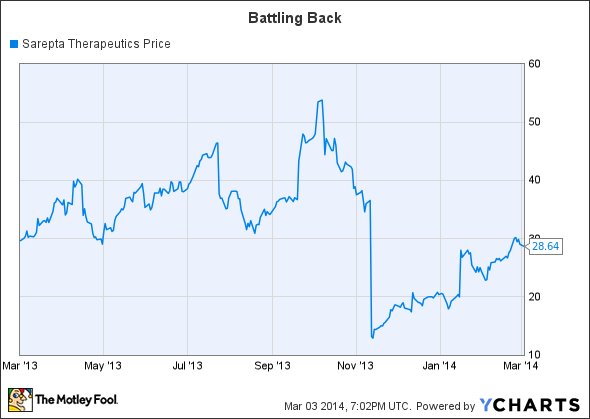 Unfortunately, it's hard to quantify the risk. After the drop in November, the stock was clearly a buy, but it's a little harder to know if the current price -- still cheaper than it was before the drop -- justifies the risk.

There are two issues the FDA has to get over. First is that the trial was extremely small, with just 10 patients generating data. A few years ago, I would have said there was no way the FDA would be convinced by that small of a data set, but the agency has been charged by Congress to approve breakthrough therapies with minimal data.

More importantly, the FDA needs to be convinced that the data in the trial is real. Because the placebo group was switched over to taking eteplirsen, there's no control group for the later time points measuring walking ability. The FDA tends to be leery of comparing data to historical averages.

It doesn't help that Prosensa (NASDAQ: RNA) and GlaxoSmithKline's (NYSE:GSK) phase 3 trial for their Duchenne muscular dystrophy drug, drisapersen, failed after looking good in its phase 2 trial. If drisapersen had passed the trial, the agency might have given Sarepta the benefit of the doubt, allowing the phase 2 data to be confirmed in a post-marketing trial.

Ironically, Prosensa and GalxoSmithKline's data could also save Sarepta. Their clinical trial data contain a placebo group that shows what a natural decline looks like. There are also patient-level data that could convince the FDA that producing dystrophin -- the protein missing in Duchenne muscular dystrophy patients -- results in a slower decline in walking ability. Since all the patients taking eteplirsen produced dystrophin, it could be more evidence that the data on walking-ability isn't a fluke.

I can't really blame investors for owning shares at this level, but just realize there's still a lot of short-term uncertainty. With all the talks occurring behind closed doors, there's no way of knowing exactly what the FDA is thinking, and Sarepta's management isn't giving many hints.