Finally, things are looking up for Eli Lilly & Co.

The loss of Cymbalta, its no. 1 product, late last year and Evista this month are going to be tough on Eli Lilly and Co ( LLY 0.44% ). Rather than cutting back on R&D, the company has tried to spend its way out of trouble with little to show for it, until recently. The company's type 2 diabetes treatments look like they have a strong chance of winning approval. If they do, they'll run into fierce competition with existing drugs from Novo Nordisk ( NVO 0.42% ), AstraZeneca , GlaxoSmithKline ( GSK 0.61% ), and Johnson & Johnson ( JNJ 1.38% ). Let's take a look at Eli Lilly's diabetes lineup and see if it has a chance of grabbing some market share from these heavyweights.

Conducting trials and cutting deals
Unlike other big pharmaceutical companies facing major patent expirations, Lilly ramped up R&D spending in the face of shrinking revenue. Due to some rotten luck in late stage Alzheimer's and breast cancer trials, the plan hasn't worked out so well. The company's diabetes program might be able to turn things around with efforts from both the clinic and the conference room. 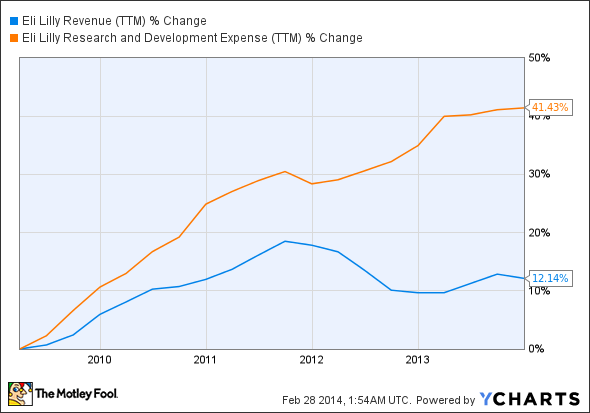 In an increasingly austere environment, having an effective product isn't much good if patients can't get their insurance to cover most of the cost. Lilly has shown recently that it knows how to please the payers. To begin the new year, the largest pharmacy benefit manager in the US, Express Scripts, replaced Novo Nordisk's Novolog with Lilly's Humalog on its list of preferred products. That wasn't the only snub to the Danish drugmaker. Express Scripts also replaced daily injected Victoza with Byetta and its once-weekly version, Bydureon, from AstraZeneca.

Equally effective, more convenient
Discounts only go so far. Luckily, Lilly can tick the efficacy box as well. Recently the company announced some good news concerning its once-weekly, type 2 diabetes treatment, dulaglutide. This was the latest in a series of phase 3 trials comparing the glucagon-like peptide 1 (GLP-1) receptor agonist to potential competitors. The opponent was Novo Nordisk's highly successful Victoza.

Lilly didn't release detailed data from the 599-patient trial. The company stated that dulaglutide was just as effective at reducing blood sugar levels after 26 weeks. While being just as good might not seem terribly exciting, according to Lilly, it's the first GLP-1 agonist that can boast of non-inferiority to market leader Victoza. If approved, the treatment's once weekly dosing should go a long way to differentiate it from Novo Nordisk's treatment, which requires daily injections.

Not alone
Diabetes competition is fierce, even in the once-weekly GLP-1 space. If approved, Lilly's dulaglutide will be late to the game. AstraZeneca won FDA approval for its once-weekly GLP-1, Bydureon (exenatide) just over two years ago.

GlaxoSmithKline also has a GLP-1 agonist under review. The company submitted a biologics license application (BLA) to the FDA for albiglutide in January of last year. The agency has extended the Prescription Drug User Fee Act (PDUFA) goal date by a few months to April 2014.

Late last month, the Committee for Medicinal Products for Human Use (CHMP) of the European Medicines Agency (EMA) issued a positive opinion for albiglutide. The EC typically follows the CHMP's opinion, so we can probably expect a European launch of albiglutide soon.

Dulaglutide is already under review in both major markets. So far the company hasn't given any indication that it might enter the market ahead of Glaxo. Hopefully, for Lilly the drug's efficacy advantage will be significant enough to impress both patients and physicians.

Another approach
Having a once weekly injection as effective as Victoza is a great selling point, but the more recent class of orally administered, type 2 diabetes treatments is putting some pressure on GLP-1 agonists as a whole. SGLT2 inhibitors reduce reabsorption of glucose in the kidneys, allowing it to exit the body in urine.

Lilly, in partnership with Boehringer Ingelheim, filed an NDA for SGLT2 treatment, empagliflozin, less than a week before the FDA approved Invokana. The application is still under review.

Final thoughts
During 2013 Novo Nordisk recorded more than $2 billion in Victoza sales, and the GLP-1 market is still growing. Express Scripts and other pharmacy benefit managers are clearly willing to replace preferred treatments for less expensive options that show similar benefit. Lilly has also proven it can compete on efficacy, and cut a deal when it needs to.

The non-insulin, type 2 diabetes treatment space is large and growing. Lilly will enter this market long after the competition, but it will be armed with some impressive clinical data. Dulaglutide and empagliflozin could go a long way to buoy sales figures as major patents expire.