Investors can expect a positive start to the stock market today, as the Dow Jones Industrial Average (DJINDICES:^DJI) has gained a modest 23 points in pre-market trading. Global indexes moved higher overnight, helped by continued diplomatic progress in the Ukraine crisis.

Closer to home, the economic calendar is light today, but investors will get an important update on the U.S. job market early tomorrow. The monthly employment report from the Bureau of Labor Statistics, due out at 8:30 a.m. EST, is expected to show that the economy added 165,000 jobs last month, and that the unemployment rate held steady at 6.6%. 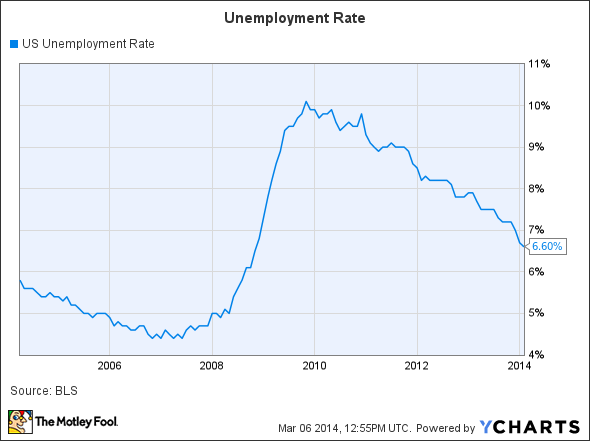 Meanwhile, news is breaking this morning on several stocks that could see heavy trading in today's session, including Costco (NASDAQ:COST), Staples (NASDAQ:SPLS), and The Buckle (NYSE:BKE).

Costco this morning announced quarterly results that showed it wasn't immune from the poor holiday shopping conditions that hurt its competitors. For the three months ended Feb. 15, the warehouse retailer's profit fell 15% to $1.05 a share. Analysts had expected a more modest decline to $1.17. Costco's revenue grew by 6% to $25.8 billion, just shy of Wall Street's 7% growth target. The company said that weak sales and pricing during the holiday shopping season were to blame for the profit slip. Still, its comparable-store sales growth was a healthy 5%, well ahead of what most other retailers could manage. Costco's stock is down 3% in pre-market trading.

Staples today booked a 28% dive in quarterly profit to $0.33 a share. Sales at the office supply retailer also slipped 4% to $5.9 billion as its store base shrunk by 109 locations. While Staples did make progress in its online initiatives, the major disappointment for investors has to be the 7% drop in comparable-store sales. Customer traffic fell sharply in the quarter, and the company plans to speed up its cost-cutting strategy in response: Staples will close 225 more stores before the end of the year. The stock is down 12.6% in pre-market trading.

Finally, The Buckle today announced that comparable-store sales for February fell by 1.4% as overall revenue came in flat at $89 million. That's a marked improvement from January's almost 7% comp decline, but still far from what investors would like to see out of the fashion retailer. Buckle will report quarterly earnings on March 14, and is expected to log a 6% revenue gain and a slight uptick in profit, to $0.52 a share. The stock is unchanged in pre-market trading.