With the recent difficulties in emerging markets, it's probably a good time to assess whether there will be any effect on the current outlook for The Boeing Company (NYSE:BA) in 2014. Moreover, if the aviation market is affected then a major engine manufacturer like General Electric Company (NYSE:GE) will be too.

The two key drivers of its share price are its delivery rates and order book. Investing Fools already know about Boeing's plans for 2014. In particular, Fools will be monitoring Boeing's aim of ramping up production of the 787 Dreamliner to 10 a month, and the Boeing 737 to 42 a month.  In addition investors in General Electric Company and the U.K.'s Rolls Royce will be interested too, because they are the engine suppliers to the 787 program. With regard to the 787, there has been some mixed news recently.

A quick look at deliveries in January and over the last 13 months, suggests that the production problems with the 787 continue to hurt Boeing:

Moreover, a recent article in the Seattle Times claims that "a big backlog has built up" in Boeing's 787 production, particularly in the mid-fuselage section. In fact, this has been an ongoing issue, and Boeing's management addressed it specifically at an investor conference earlier in February. When pushed on the subject, The Boeing Company's CEO, Jim McNerny commented that the company was "... adding people down in Charleston over the last couple of days to address the bottleneck we have in the mid-body assembly area which I view as not any sign of the 787 program is off the rail ...".

On a more positive note, he also went on to confirm that Boeing was about to hit the target  of 10 per month "about now". If so, then it's likely that there could be some cost overrun, because the Seattle Times article claims that workers were being offered an 8% bonus of their annual pay in order to fix the problems.

Emerging emerging-market weakness, developing developed world strength
The best way to articulate the diverging trends between emerging markets and the developed world is to illustrate it with with data compiled from the International Air Transport Association, or IATA.

The IATA adjusted its year-end forecast for regional airline profitability in 2013. As such, it shows a strengthening trend in North America, the Middle East and Europe, and conditions moderating in Asia-Pacific and Latin America: 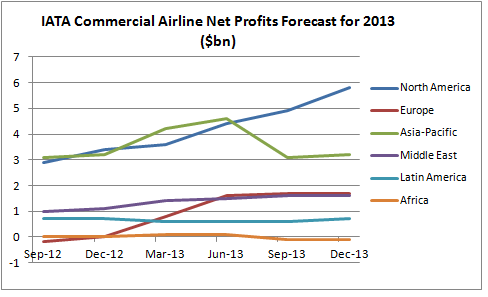 A look at the IATA's forecast for airline profitability in 2014: 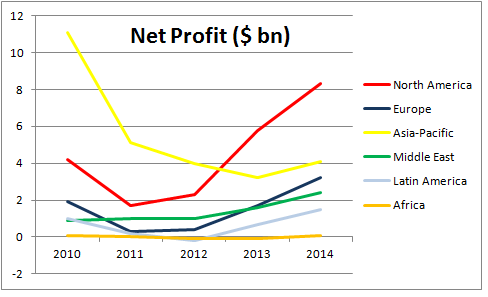 Clearly, the IATA is expecting a bounce in profitability in Asia-Pacific and ongoing strengthening in other regions, notably in North America. The Boeing Company will be hoping that the IATA is right, because the company recently forecasted that the Asia-Pacific region will generate $1.9 trillion in orders over the next 20 years. The quoted figure represents 36% of its forecast for worldwide deliveries in the period.

Moreover, the recent economic and political difficulties in countries like Turkey, Venezuela, Argentina, Ukraine, and Russia, coupled with the uncertainty over China's growth in 2014, cast doubt on growth prospects in certain emerging markets. So far there doesn't appear to be any tangible effect on orders. However, considering that SunExpress Airlines (a Turkish airline) has made Boeing's largest single commercial order this year, the potential for future problems is obvious.

There are also reports that budget airlines such as AirAsia and Jetstar Asia are moderating their growth plans in response to the kind of market conditions implied in the first chart above. This could be a sign that airlines in Asia are suffering from overcapacity and competitive issues. Investors should monitor the IATA's economic forecasts closely.

The Boeing Company's bottom line
In conclusion, Boeing's outlook is a little bit more negative than it was at the start of the year. The company's management appears confident that their delivery plans are on track, but they may be faced with some increased costs on the 787 program.

Moreover, the order outlook has become a bit more uncertain with some worsening in certain emerging markets. Investors in Boeing and General Electric (aviation made up nearly 27% of GE's industrial profits in 2013) will be hoping that North American airlines can continue to increase profitability in order to offset any potential weakness in emerging markets.