The details of a $77.2 billion interest-free loan to Warren Buffett's Berkshire Hathaway.

What makes Warren Buffett the greatest capitalist of all time?

A 2013 study discovered Warren Buffett is a great stock picker. But the "special sauce" in the Buffett formula is his use of leverage -- using borrowed money to make investments.

Multiplying your returns
Leverage can have tremendous impact on your investment returns. But unlike you and I, who would have to pay as much as 5-8% per year to borrow money, Buffett pays nothing.

Berkshire borrows this money from its customers -- its insurance customers. Each time customers make a payment on their insurance policies, Buffett gets to use the money until it is paid back out in claims. Between these time periods, Buffett enjoys the full use of interest-free financing and the investment returns that come from his investments.

The numerical value of free money
Over time, Warren Buffett's interest-free loans have only grown. Here is a chart of Berkshire Hathaway's insurance float since 1970: 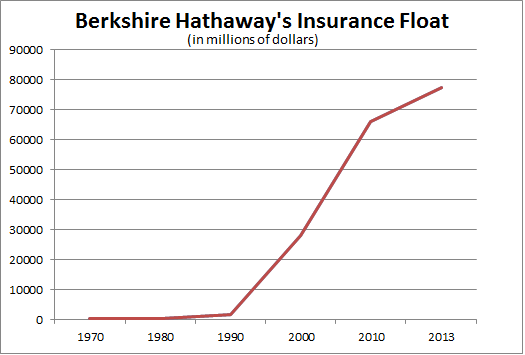 When researchers from the National Bureau of Economic Research studied Buffett's insurance float, what they found was remarkable. Over the period from 1976-2011, Warren Buffett has borrowed countless billions of dollars at a rate that averaged 3.09 percentage points lower than the Treasury Bill rate. Buffett was borrowing money at a lower price than the U.S. Government!

At no point were these cheap loans tiny contributors to Berkshire's success. No, the insurance float equaled an average of 36% of all Berkshire borrowings from 1976-2011.

Warren Buffett's stockpicking skills are unmatched, but so is Berkshire's ability to generate billions of dollars in interest-free loans. Both contribute to what is the most impressive corporate track record in history.