This weekend, investors are celebrating the fifth anniversary of the bear-market low for the Dow Jones Industrials (DJINDICES:^DJI). By looking at which stocks have gained the most during the bull-market run since early 2009, you might think that you've found the stocks that will be the best long-term performers in your portfolio. But the better way to measure success is by including both bull-market and bear-market performance, measuring from peak to peak rather than from low to high. When you judge the Dow's performance that way, four stocks stand out as having had the best performance between the market's pre-meltdown highs in October 2007 and now: Home Depot (NYSE:HD), Nike (NYSE:NKE), Disney (NYSE:DIS), and McDonald's (NYSE:MCD). 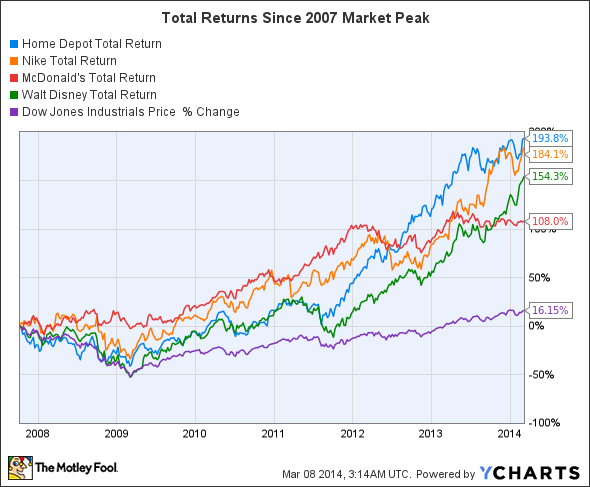 The most striking thing about these performers is that they all reached their long-term success in different ways. McDonald's won't show up on any high-performing screens over the past five years for a simple reason: its post-bear-market performance hasn't been all that strong. But alone among these top four stocks, the fast-food giant managed to avoid the bear market entirely, starting from a higher level in early 2009 and making even its more modest gains hold up during the ensuing bull-market run. Even the stock's lackluster performance over the past two years hasn't kept it from making the top four.

On the other hand, Disney was the closest to mirroring the full extent of the Dow's drop in 2008 and early 2009, as the entertainment company hadn't yet established how it would recover from the deepest recession in decades. Yet in the summer of 2009, Disney made the aggressive move of paying $4 billion for Marvel Entertainment, setting the stage for what has been one of its strongest growth drivers in recent years. With so many franchise opportunities for the company's movie-studio business, Disney now finds itself in a strong position to leverage the assets it obtained from Marvel and more recently Lucasfilm across its spectrum of media and entertainment properties.

Splitting the difference were Home Depot and Nike. Home Depot actually performed worse than the Dow during the run-up to the financial crisis, as the collapse of the housing market preceded the full brunt of the market meltdown and left the home-improvement retailer without a clear strategy to recover. Yet by focusing on helping customers with must-do projects tailored to help those stuck in their current homes and to make hard-to-sell homes more marketable, Home Depot managed to get more efficient and keep itself on track to reach its long-term goals. When housing finally did recover, Home Depot was in an even better to reap the rewards.

Nike, of course, wasn't even in the Dow during the whole period, but its performance nevertheless plowed a middle-ground among the other three high-flying stocks. Nike didn't lose as much as its peers during 2008 and early 2009, as its name-brand recognition helped it avoid the full brunt of the recession. Yet even in the face of competition, Nike has managed to keep up its growth and look to expand into new markets, with the most recent foray being its push into soccer in anticipation of the 2014 World Cup.

Many stocks have had better performance than these four over the past five years. But in terms of long-term consistency through good times and bad, these four stocks are the best in the Dow, and as you consider the potential for future downturns, keep that in mind as you create the best portfolio for your financial goals.