What a difference a year makes—if you're on the West Coast or in Florida. Compared to this time in 2013, inventory levels in many of the California, Arizona, Nevada, and Florida metros we survey for Movoto Real Estate's monthly State of the Real Estate Market report are up significantly. At the same time, pretty much everywhere else in the country—especially Texas—has seen inventory levels go largely unchanged or drop significantly.

Fifteen of the 38 markets we look at saw double-digit increases in inventory versus this time last year, while 11 witnessed decreases of more than 10 percent. In February 2013, there were 89,198 properties on the market in our specified cities, while last month there were 95,393, a total increase year-over-year of 6.9 percent.

At the same time, the median list price index is at its highest level since at least January 2010, at $182. Compared to this time last year, when the index sat at $168, that is a 8.4 percent rise. All but three of the markets we survey for this report either saw a year-over-year increase in the median list price per square foot index or remained flat. The most significant price increases correlated with the markets where inventory has seen the largest inventory decreases, such as Texas, with Minneapolis, MN seeing the sharpest rise in price despite no significant loss of inventory.

How This Report Is Made
When building Movoto's monthly State of the Real Estate Market report, we look at 38 geographically diverse cities in order to determine total inventory levels and a median price per square foot index. In addition, we further break down this data on a month-over-month and year-over-year basis. The data used comes from each city's Multiple Listing Service. 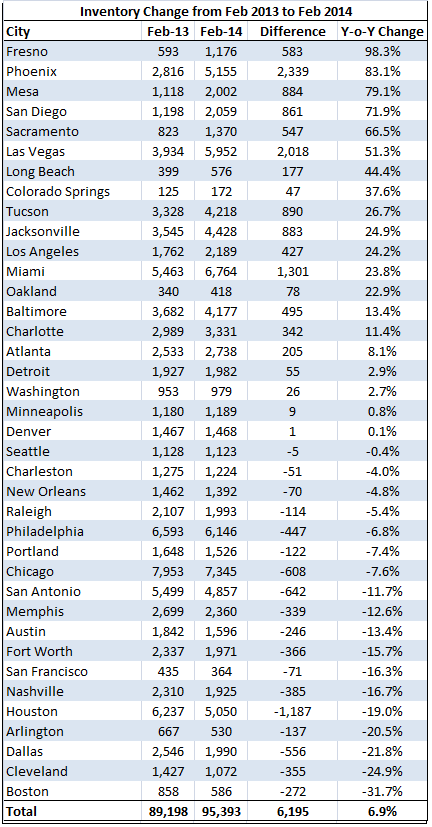 The three cities that saw the largest increase in median price per square foot index year-over-year were:

Colorado Springs, CO, Charlotte, NC, and Cleveland, OH all saw decreases in their median price per square foot of 1.7, 2.0, and 2.1 percent, respectively.

The three cities that witnessed the largest increase in year-over-year inventory for February were:

During the same period in 2011, 2012, and 2013, inventory levels fell, although the rate at which they did so has been slowing. In our analysis, inventory and prices look to continue the trend of the past 12 months, with both slowly increasing throughout 2014. However, we don't anticipate either to do so at the same rapid pace as last year, as new inventory continues to reach the market.

This article originally appeared on Movoto.com