Warren Buffett has turned $2.9 billion into almost $35 billion through investments in Coca-Cola, Procter & Gamble, and American Express, and Buffett himself tells you how to repeat his success.

Warren Buffett and Berkshire Hathaway ( BRK.A -0.56% )( BRK.B -0.44% ) recently released the annual report and reveal how the famed investor raked in billions via the stock market.

The report from Berkshire Hathaway is always fun to navigate. The immense amount of businesses at Berkshire Hathaway -- from insurance companies to railroads and seemingly everything in between -- plus the insightful quips from Buffett himself, make it worth the read. Yet one table revealed a staggering win for Buffett.

A sizable return
The holdings of Warren Buffet and Berkshire Hathaway are well known, as it has a nearly $22 billion position in Wells Fargo, a $16.5 billion stake in Coca-Cola ( KO -0.38% ), an American Express (NYSE: AXP) investment worth $13.8 billion, and an IBM holding of $12.8 billion. These four companies are affectionately known as the "Big Four."

Yet what is not well-known is exactly how much Berkshire Hathaway paid for these stocks. The total value of stocks held by Berkshire Hathaway stands at a staggering $117.5 billion, but it only paid $59.5 billion, meaning in total Berkshire Hathaway has essentially doubled its money. In addition, what has also been truly remarkable is those unrealized gains grew by more than 55%, or $21 billion in the last year alone: 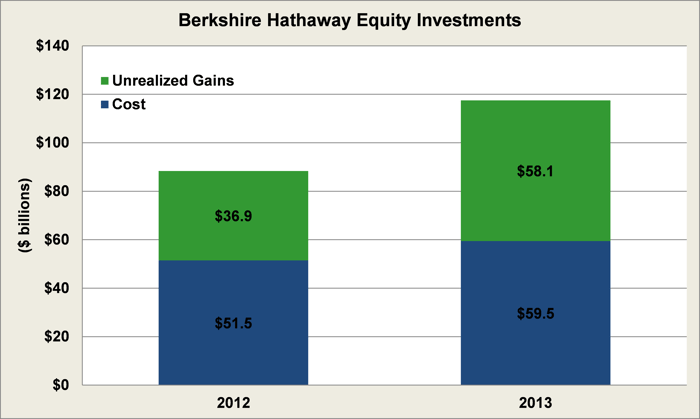 While a doubling of money is truly impressive, there are three stocks Buffett has invested in that have generated a return of 1080%.

The real winners
Two of the biggest winners are actually among the big four at Berkshire Hathaway, including Coca-Cola and American Express, but the third company is one which is known by many, but often excluded when discussing what Berkshire owns: Procter & Gamble ( PG 0.45% ). As shown in the chart below, it fractionally trails Coca-Cola as Warren Buffett's best investment:

In addition, those figures represent the change in the market value of the stock price, and do not include the dividends to reveal the total return on the investment. Just in the instance of Coca-Cola, Buffett began buy shares of the company in 1988 and continually added to it until 1994. But since the initial investment, it has delivered a staggering total return of more than 2,500%.

What we can learn
At times, it is often thought tremendous returns can only be made on picking the next under-the-radar company or hot start-up. Yet Buffett shows us the best investments are those made in high quality companies with established market leadership and strong management teams.

In his Berkshire Hathaway stock owner's manual, which he released in 1996, he said:

As owners of, say, Coca-Cola or American Express shares, we think of Berkshire as being a non-managing partner in two extraordinary businesses, in which we measure our success by the long-term progress of the companies rather than by the month-to-month movements of their stocks. In fact, we would not care in the least if several years went by in which there was no trading, or quotation of prices, in the stocks of those companies. If we have good long-term expectations, short-term price changes are meaningless for us except to the extent they offer us an opportunity to increase our ownership at an attractive price.

All too often we can be trapped into thinking short term price fluctuations would be reasons to buy or sell a stock, but as Buffett clearly shows, the best investments are those in made "extraordinary businesses," with "long-term expectations."

Wow! Buffett Has 78% of His Portfolio in These 5 Stocks