A high-resolution digital music player from Neil Young will soon go on sale. Is the new device a threat to Apple's iPod business?

Hearing high-resolution digital music "for the first time is like that first blast of daylight when you leave a movie theatre on a sun-filled day," Canadian singer-songwriter and musician Neil Young wrote last year on an official Facebook page dedicated to his PonoMusic project. Now Young is ready to bring this master-quality music to market, according to a press release from PonoMusic on The Computer Audiophile. Competing with Apple's ( AAPL -0.32% ) iPod, the music service will launch with a PonoPlayer.

The PonoPlayer will soon be available at PonoMusic.com and can be pre-ordered at a discount at Kickstarter.com on March 12.

Undeniable limitations
It sounds nice: "[M]aster-quality digital music at the highest audio fidelity possible, bringing to life the true emotion and detail of the music, the way the artist recorded it." But the PonoPlayer is plagued with two major drawbacks.

Apple's iPod Touch with a front and rear camera starts at $299, $100 less than the price for Neil Young's PonoPlayer. Image source: Apple.

First, it carries a hefty price tag of $399. Comparably, consumers can grab Apple's newest version of its iPod Touch for as little as $229. Folks willing to pay $299 for an iPod can also get a decent front and back HD cameras built in. Furthermore, an iPod Touch gives consumers access to Apple's expansive App Store.

Second, storage is limited. While the PonoPlayer's 128 GB of memory sounds considerable, the large files required mean that the player can only store "100 to 500 high-resolution digital-music albums, depending on the resolution and length of the original recording," according to the press release.

But we've yet to address the biggest problem with Young's PonoPlayer:

Terrible timing
The music player market has been declining for years. More recently it has taken a steep nosedive. Just take a look at Apple's iPod sales. 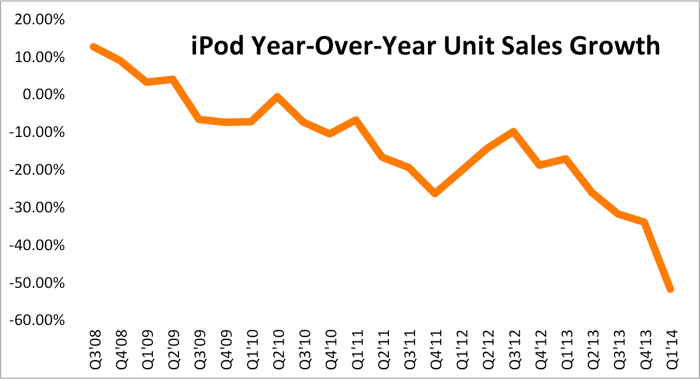 Specifically, Apple's year-over-year iPod unit sales declined by a whopping 52% in the company's most recent quarter. Apple CEO Tim Cook said in the first-quarter earnings call that "all of us have known for some time that iPod is a declining business." Apple's iPod business accounts for less than 2% of the company's total revenue.

Neil Young's project may find love among a small niche group, but Apple management likely won't be planning a countermove to the PonoPlayer anytime soon -- or ever.