Last year was one that most potash miners would like to forget, as the breakup of a European sales consortium led to a steep drop in the fertilizer's price. It looks like the air is finally starting to clear, according to Potash Corp. (NYSE:POT), Mosaic (NYSE:MOS), and Agrium (NYSE: AGU).

Certainty and uncertainty
Potash is a key crop nutrient, most notable for its assistance in drought protection. Although demand ebbs and flows, the trend has been toward higher use as nations around the world climb up the economic ladder. This, however, is science, not finance. Growing plants deplete the nutrients in soil, potash helps replenish what's been lost.

As the global population grows, more food is needed to feed everyone. Moreover, as countries advance economically, its residents start to eat more crop intensive foods, like meat. As that increases, it will likely keep upward pressure on the demand for potash.

The potash market, however, was hampered by an unusual even in 2013. A European consortium broke apart, leaving the market in a state is confusion. One of the key players in the breakup made overtures that it would seek market share at the expense of price, pushing potash buyers to the sidelines even as prices fell.

During his company's fourth quarter earnings call, Agrium CEO Charles Victor Magro noted the impact: "Prices for all 3 major crop nutrients were down over 25% compared to the fourth quarter of 2012." That pushed results at Agrium, Potash, and Mosaic lower, with each posting full-year 2013 results that were below 2012 levels.

It can only last so long
However, Agrium's Magro went on to say, "The good news is that we have seen a significant rebound in global nitrogen and phosphate markets..." and, "...there has been a definite improvement in the sentiment within the global potash market." This falls on the science that underpins the potash market's long-term prospects—you can delay fertilizing, but you can't stop.

Potash CEO William Doyle summed it up well, "As farmers around the globe look ahead to the upcoming growing season, purchasing activity is strengthened." And, "...we believe that the conditions in place today could support record or near record global [potash] shipments of 55 million to 57 million tonnes in 2014." That would be a welcome turnaround from 2013.

However, don't expect that to drop down to the bottom line right away. While Mosaic CEO Jim Prokopanko believes, "the business cycle is beginning to turn in our favor," he expects, "to see shipping volumes increase before prices turn upward." In other words, demand needs to solidify more before Potash, Agrium, and Mosaic can push through higher prices.

Brighter, but not clear
The outlook for this trio is far brighter in 2014 than it was in 2013. That said, there is still uncertainty in the air. For example, Potash's Doyle notes that, "Even with increased demand in our sites through the first part of the year, the consistency of engagement by key contract markets in the second half will play a pivotal role in determining the extent of the global demand recovery." Basically, demand out of China and India needs to pick up and stay up if prices are going to firm up.

For example, Doyle explains that, "incremental domestic capacity gains [in China] have largely kept pace with... rising needs." That said, Rick McLellan, a senior vice president at Mosaic, sees the opportunity for India to, "come in and probably move more volumes than they have in the past..." in the second half of the year. If that comes to pass and/or China steps in to import potash, 2014 could turn into a good year. If neither happens, 2014 will likely be better than 2013, but it will hardly be one for the record books.

The long, long-term
Fertilizer demand is on a long-term upward path. That should support long-term growth at Potash, Mosaic, and Agrium. However, the big picture doesn't resolve the short-term issues still facing this trio. As the haze is beginning to clear, though, more aggressive investors may still have an opportunity to buy key potash suppliers at discounted prices. 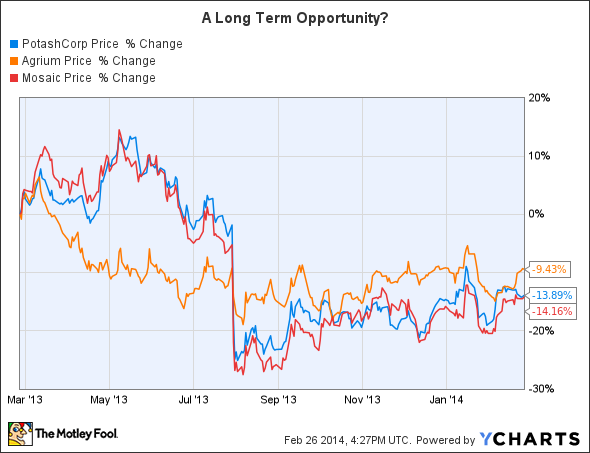 Finding the right stocks is only one part of the retirement story...