Four straight months of falling domestic comps should put its stock in a deep freeze.

There's that pesky "snow in winter" problem cropping up for McDonald's ( MCD 1.61% ) as it tries to explain why monthly comps fell for four months in a row here in the U.S, but since they're also down globally for two of those four months as well, I'm not sure that's a valid excuse any longer.

Retailers of all stripes have been falling back on blaming the weather for lackluster sales. Yet, as I noted when Darden Restaurants ( DRI 1.01% ) used that as its fallback rationale for comps falling by triple-digit basis points in December, Janaury, and February, it really depends on location. According to the National Oceanic and Atmospheric Administration, many areas of the country actually saw above-average temperatures with some regions having among their warmest winters ever.

While the weather did turn frigid at times these past few months, Burger King Worldwide( BKW.DL ) reported comps at its restaurants here in the U.S. were up 0.2% for the three months ending December 31 while globally they were 1.7% higher. Wendy's ( WEN 1.10% ) saw a 3.1% rise for the three-month period in its North American company-operated stores and a 2.8% increase for franchised operations. In fact, the word "weather" never even cropped up in their announcement.

At once, McDonald's is faced with the prospect of having given its customer base too many menu options to choose from at the same time they're confronted with more dining options from rivals. In addition to the usual competitors changing up their menus, other fast-food restaurants are wooing customers away as well. Yum! Brands ( YUM 1.89% ) Taco Bell unit, for example, is launching a breakfast menu and convenience stores are stocking fresh foods and quick, grab-and-go items that are stealing business from the fast-food chains. More than a third of diners recently surveyed said they got a bite to eat at their local 7-Eleven, Wawa, or QuickChek instead of at a fast-food place.

Just last month, I was asking if McDonald's would be able to weather the storm after it had used the winter weather excuse once again. At that time, I noted how higher menu prices and healthier fare hadn't stemmed the losses then and it's apparent they still haven't done so now. There's now a fairly large disconnect between how its U.S. operations are performing against those of its international business. 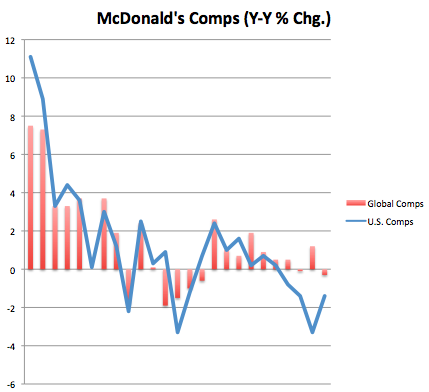 The flagging economy is dragging McDonald's down and one has to ask just how many burger palaces we need before we've reached the saturation point. The burger flipper says it's planning on opening another 1,500 to 1,600 restaurants this year and though a good portion may be international those markets aren't exactly healthy either.

China, for example, which together with Australia and Japan, accounts for 54% of its revenues, reported trade data over the weekend that signaled a substantial decline in the economy. Exports collapsed more than 18% in February from the year ago period compared to analyst expectations of a 7.5% increase and down from the double-digit growth it achieved in January. Yum still hasn't recovered from its chicken woes in the country and McDonald's own fourth quarter performance saw regional revenues drop 2.4% with its performance in China flat.

In essence, I think McDonald's can no longer be thought of as a growth company and investors should probably start valuing it like the mature business it has become. The fast-food chain isn't going away, but the outsized performance they became accustomed to is not something they'll be able to flip over any further.