Here are a few reasons why Michael Kors could be a great pick for your portfolio.

While consumer spending in the U.S. increased 0.4% in December, consumer confidence slipped to 81.2 in January from 82.5 in the previous month, according to the University of Michigan index. Hence, luxury retailers experienced weakness in demand which led to lackluster performance. However, this was not the case for premium retailer Michael Kors ( CPRI -1.68% ) which was totally unaffected by the dent in consumer confidence.

In fact, Michael Kors seems to be enjoying a rise in consumer spending with each passing quarter. Its recently reported third quarter was a blockbuster and the results were way beyond analysts' expectations.

The extraordinary
If a person gets a chance to choose from a variety of exclusive handbags that cost less than those from other companies, what decision will she make? Obviously, go for it. This is exactly what has happened with people in the U.S. and Europe. Michael Kors' products such as watches and handbags have witnessed great demand, which has driven the company's revenue north. Its revenue for the quarter grew an unbelievable 59% to $1.01 billion to cross the billion-dollar mark for the first time. Also, its bottom line jumped 77% as earnings reached $1.11 per share.

The growth was not only driven by the 98 new stores added in the last twelve months, including 43 openings during the quarter, but also by same-store sales growth of 28%. This shows how the company's offerings are attracting customers. Not only did the retail segment perform well, wholesale segment sales also increased by 68% to $461 million as demand for footwear and accessories surged.

The secret of success
Along with factors such as attractive products at competitive prices which lured customers, there are other reasons why Michael Kors has become so popular. One of the primary reasons for its growth has been its marketing efforts as the company has made advertisements and told customers about its offers via mail. Well-promoted holiday offers lured customers to its stores, boosting the retailer's top line. Also, Michael Kors' efficient and on-time deliveries have also proven beneficial.

In contrast, other industry players are finding it extremely difficult to bring customers into their stores. One of the company's biggest rivals, Coach ( TPR -3.88% ), seems to be suffering the most as it has been witnessing declining sales. Its last quarter too was a lackluster one as revenue dropped 6% from the year-ago period to $1.4 billion. Same-store sales too fell 13.6% as the luxury retailer saw declining handbag and accessories sales in North America. The decreasing store traffic not only came because of lower consumer confidence, but also because customers shifted to Michael Kors' stores. However, sales in China were a relief for Coach as they grew by 25% during the quarter, which enabled the company to open 10 new stores in the region.

Michael Kors has been eating away at Coach's customers, which is also reflected in the stock prices of both companies. The stock price changes of the two companies as well as another player, Ralph Lauren ( RL -2.59% ), are given in the chart below: 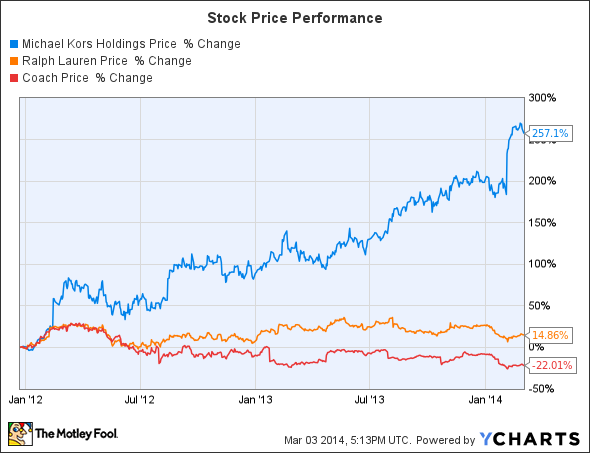 However, Ralph Lauren's stock price increased by 14.9% over the same period, mainly because it has made moves such as designing uniforms for the Sochi US Winter Olympics team. Also, Ralph Lauren reported a decent quarter with a top-line increase of 9% and bottom-line growth of 11%. In fact, the growth was achieved across both the retail and wholesale segments as the company opened new stores. This also enabled the premium retailer to raise its annual revenue guidance to 7% from 5%-7% earlier. Despite such a remarkable performance Ralph Lauren failed to outpace Michael Kors.

Holding up
In addition to its continuous strong performance and the great returns received by its investors, Michael Kors has given us more reasons to believe in it. It has successfully outpaced other players in the industry with the help of its tempting products and great marketing strategies. After becoming very popular in the women's handbags and accessories segment, the retailer now plans to expand its offerings to men.

Michael Kors expects to grow its men's division to $1 billion, which will make the contributions from both men's and women's products equal. Hence, it plans to launch a men's fragrance which it will promote heavily. Additionally, it introduced a new men's collection recently which is expected to bring in more customers. These efforts should help the company enhance and strengthen its presence in the retail space.

Obvious conclusion
There are no doubts about the luxury retailer's performance. Michael Kors has been one of the most remarkable retailers as it has managed to post extraordinary numbers while others were striving for growth. Moreover, it has not stopped there. Its plan to capture the men's division and bring it to par with its existing female division looks quite lucrative. I find no reason to stay away from this sparkling retailer.