Costco is materially outperforming Wal-Mart over the last several years, and this could show that higher salaries and employee benefits can mean higher returns for shareholders.

Whether we consider sales, earnings, or stock market returns, Costco ( COST 0.65% ) is outperforming Wal-Mart ( WMT 1.51% ) by a considerable margin in recent years. This is probably due to a multiplicity of factors, since both companies have important differences in areas such as business model and size.

However, there could be some important lessons to be learned from the competition between Costco and Wal-Mart when it comes to employee compensation and its relationship to business profitability. While many people tend to think that higher costs in segments such as salaries and benefits are necessarily detrimental for shareholders' returns, this interpretation may be far too shortsighted.

Over a period of years, attracting a more talented workforce and keeping employees incentivized has undeniable benefits for productivity and customer service, among many other business aspects, and this is probably one reason why Costco shareholders are receiving superior returns than investors in Wal-Mart.

An investment in Costco has been far more profitable than a position in Wal-Mart in the last decade. 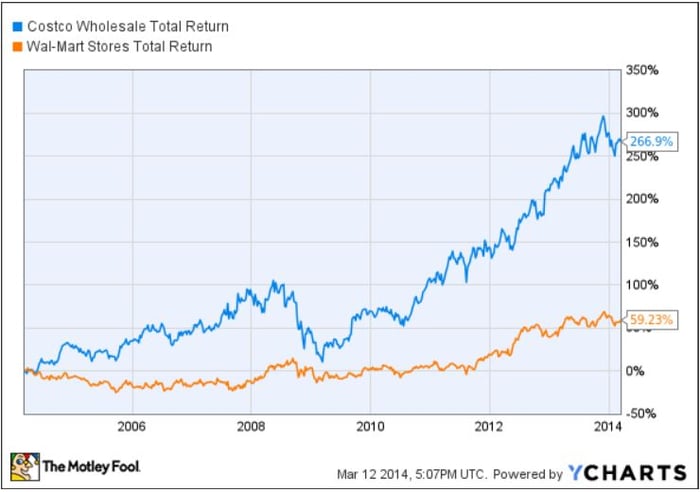 Costco is not only beating Wal-Mart when it comes to stock market returns, which can at times be heavily influenced by subjective factors such as investors' opinions and perceptions about different companies. Costco is also doing much better when it comes to the cold, hard numbers of sales and net income. 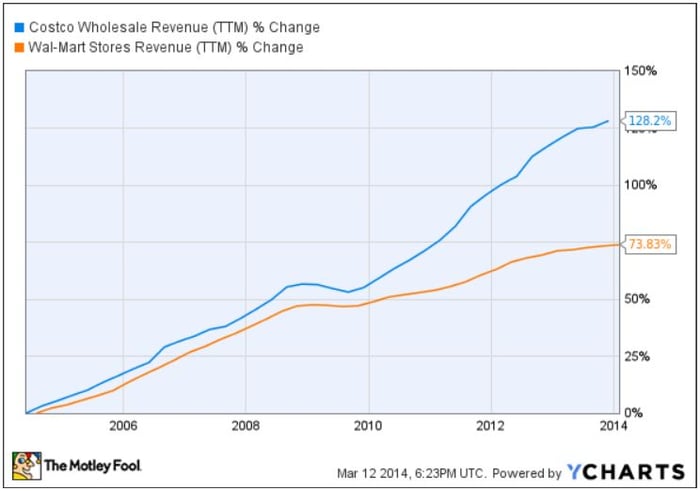 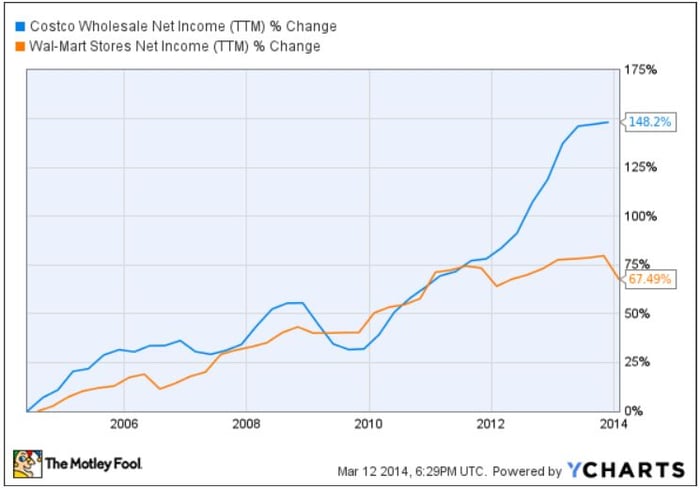 This outperformance cannot be attributed to a single factor, since there are important differences between both organizations when it comes to matters such as business model, strategy, and company size.

Costco has been a pioneer in the warehouse club retail model, and the company was materially smaller than Wal-Mart 10 years ago, so it was easier for Costco to expand more rapidly from a smaller base. However, it's worth noting that Costco and Wal-Mart have significantly different policies when it comes to salaries and other employee benefits.

Human resources
Costco understands the importance of attracting and retaining a skilled and incentivized workforce.

According to an article published last June in Bloomberg Buisnessweek, Costco pays its hourly workers an average of $20.89 per hour versus an average wage of $12.67 per hour for full-time Wal-Mart employees. The company also offers better benefits, such as health insurance and 401(k) plans, and it provides abundant opportunities for professional growth to employees at different levels.

This policy is not based solely on pure altruism; a happier workforce reduces employee turnover while increasing productivity and loyalty. Better customer service has given Costco a growing and recurrent customer base: the membership renewal rate is usually above 85%, thanks to customers who are generally quite happy with what Costco has to offer.

Wal-Mart, on the other hand, has been widely criticized for insufficient wages and poor working conditions. This is not only a problem for workers, as the company has the lowest ranking among supermarkets in the American Customer Satisfaction Index, with a score of 72 versus an industry average of 78.

It could be argued that Wal-Mart follows this strategy to provide lower prices than the competition. However, customers don´t seem to believe that this is the best way to go, at least judging by their shopping decisions lately.

The company has been delivering lackluster financial performance in recent quarters, reporting a 0.4% decline in same-store sales in Wal-Mart U.S. during the 14 weeks ended on Jan. 31. Comparable-store sales at Sam's Club locations, excluding fuel, declined by 0.1% during the period.

Costco is also being hurt by factors such as harsh weather conditions and lackluster consumer demand, but the company still reported a much better performance in its latest earnings report. Comparable-store sales increased by 5% during the 12 weeks ending Feb. 16 when excluding gasoline price fluctuations.

Far from being reduced, the performance gap between Costco and Wal-Mart seems to be increasing, and this provides further validation for Costco's innovative strategies in human resources and other areas.

Foolish takeaway
Salaries and benefits are not only expenses on an income statement. Human talent is a valuable resource in the increasingly competitive business world. Skilled employees working under the right incentives can generate enormous benefits for investors via increased productivity and customer satisfaction, just for starters. Innovative companies such as Costco prove that happy employees can make shareholders smile, too.