Today's economic calendar is light, but investors will get an update on the U.S. jobs situation before the market opens tomorrow morning. Initial weekly unemployment claims are expected to come in at 330,000: Look for that report at 8:30 a.m. EDT. 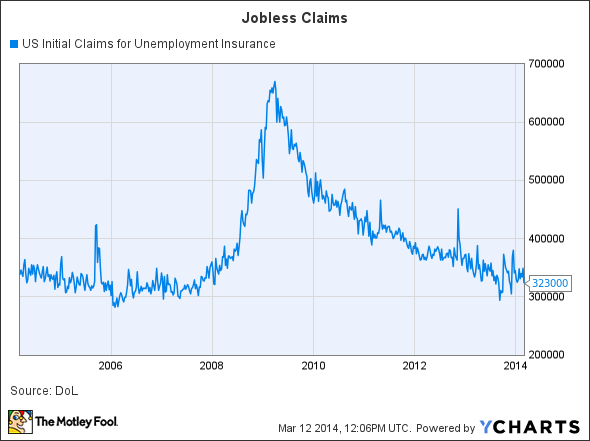 Meanwhile, news is breaking this morning on a few stocks that could see heavy trading in today's session, including Express (NYSE:EXPR), Boeing (NYSE:BA), and EPL Oil & Gas (NYSE: EPL).

Express today announced earnings for its fiscal fourth quarter. The specialty clothing retailer booked a slight drop in revenue, to $716 million, as comparable-store sales improved by a disappointing 1%. Profit, at $0.57 a share, also came in lower than expected: The company was forced to cut prices more dramatically than it had planned, given the intensely promotional retail environment. Those struggles have continued into 2014, Express said; it gave a cautious forecast for the year that includes a big profit drop for the current quarter. The stock is down 11.8% in pre-market trading.

Boeing this morning said that it has secured an order for 42 of its new 737 Max 8 aircraft from SpiceJet, an Indian company. The purchase is notable as it shows the Max 8 is a commercial hit already, having accumulated almost 2,000 orders ahead of its first deliveries scheduled in 2017. The deal also deepens ties between Boeing and SpiceJet, which has now ordered 90 airplanes from the Dow giant. While Boeing investors should be pleased with the company's surging aircraft order backlog, they should also keep a close eye on production bottlenecks, which could put pressure revenue growth. The stock is down 0.3% in pre-market trading.

Finally, EPL Oil & Gas agreed to be purchased by Energy XXI (NASDAQ: EXXI) in a $2.3 billion merger that will create the largest independent oil and gas producer on the Gulf of Mexico shelf. The deal offers EPL shareholders $39 per share in total payment, 65% of which will come in cash, with the remainder in the form of stock in the newly combined company. As for Energy XXI investors, their company will take on more debt, but the deal should immediately begin to boost earnings. EPL stock is up 29% in pre-market trading, while Energy XXI is down 6.3%.