AT&T and Verizon are odd ducks on the Dow because they're exploring new 52-week lows rather than highs. And for very good reasons.

It's no secret that 2014 has been off to a rocky start for investors. Fifteen of the 30 Dow Jones Industrial Average (^DJI) components are trading below their New Year's Eve prices. Even so, most Dow stocks remain strong -- 23 of the 30 members trade within 10% of their 52-week highs. The Dow itself has gained 13% over the last 52 weeks.

But there are exceptions to the market cheer. In particular, the two telecom stocks have failed to keep up with their Dow peers. Verizon Communications (VZ 0.92%) is down 3.2% year over year and AT&T (T -0.25%) has dropped 12%. Both stocks sit outside that 23-member club of performers that are within 10% of 52-week highs. They are, in fact, exploring new 52-week lows these days, which is rare among Dow stocks. 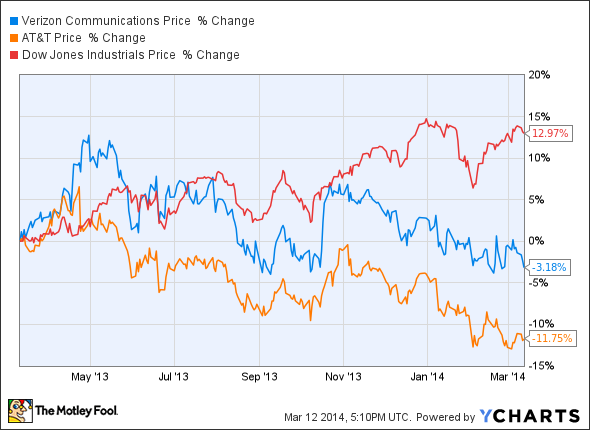 Telecom investors are voting with their wallets as the American wireless market reshapes under their feet. Verizon and AT&T used to be the unchallenged masters of their domain, always outgrowing smaller rivals. In a virtuous cycle, the profits gained from doing so helped Ma Bell and Big Red maintain their dominance by investing more than their competitors in next-generation network technologies.

All of that is changing. Now, T-Mobile (TMUS -1.32%) is the fastest-growing wireless network and Sprint (S) has a new lease on life via parent companySoftBank's deep pockets.

Virtuous cycles can do amazing things for a company and its stock, but the same is true about the vicous kind of self-reinforcing feedback loop. Right now, AT&T and Verizon need to show that they can stem the bleeding at the hands of T-Mobile, while also stopping Sprint from gaining its full potential.

Verizon is making minor adjustments to its service plans, pressured by lower-cost options from T-Mobile and others. AT&T followed suit this week, but only for a limited selection of rate plans. Specifically, you can now save money on AT&T plans with one or two lines, but those with larger shared plans are out of luck.

The two giants don't look terribly convincing in their halfhearted attempts to stave off hungry challengers. They still wield a huge advantage in spectrum licenses, where only AT&T and Verizon have access to the coveted 700 and 800 MHz bands that cover large areas and cut through cluttered cityscapes with ease. But consumers must pay a premium to enjoy that unique advantage.

Still not convinced that Sprint and T-Mobile are eating the Dow telecoms' lunch? Let me add the two mini-majors to the chart above, and see if you can spot the trend. (Hint: T-Mobile and Sprint are crushing AT&T and Verizon in the open market.) 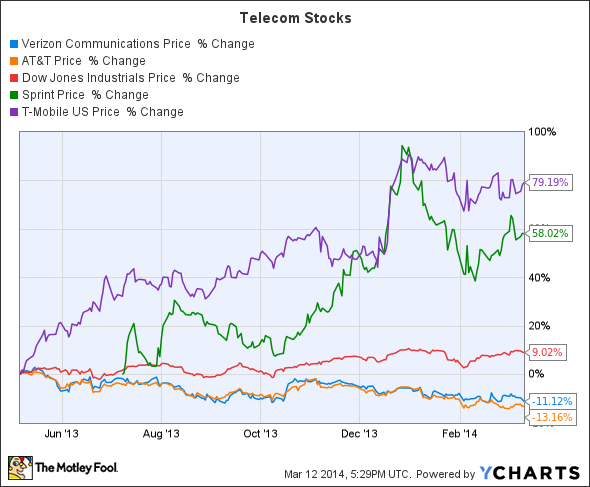