After a 5-year bull market, investors of all sizes are starting to wonder when the party will end. But there are still companies out there that know how to weather a storm and pay a nice dividend. Bank of Hawaii (NYSE:BOH) is one such stock.

In fact, it yields a greater dividend than Huntington Bancshares (NASDAQ:HBAN), US Bancorp (NYSE:USB), and even Wells Fargo. 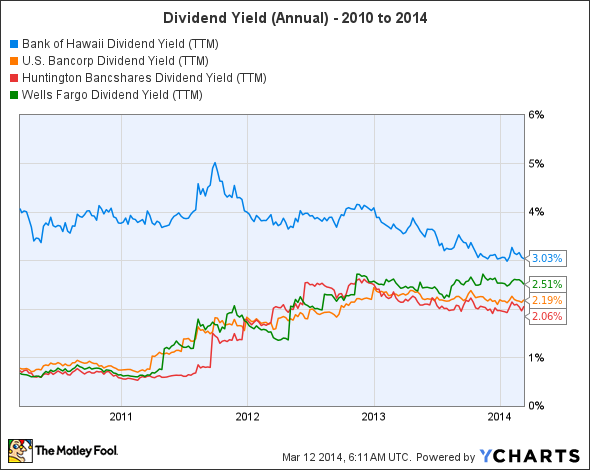 A dividend, however, is only as strong as the business supporting it. So, here are three reasons why Bank of Hawaii's dividend will only strengthen with time.

The Hawaiian economy
Since banks are cyclical businesses, we often look at U.S. economic data to gauge opportunity. While this makes sense for the more geographically diverse U.S. Bancorp, it makes much less sense for Bank of Hawaii. The bank correlates better with its regional economy which is heavily based on tourism, real estate, and the US government – or, more accurately, the Department of Defense (DoD).

Tourism dropped off some during the financial crisis, but has been steadily rising since 2010. Military spending in Hawaii is worth billions, and the government is unlikely to abandon such a strategic location in the middle of the Pacific. And according to Bank of Hawaii CEO Peter Ho, "Real estate values in Hawaii, on Oahu in particular, were nowhere near hit as badly as... the mainland." 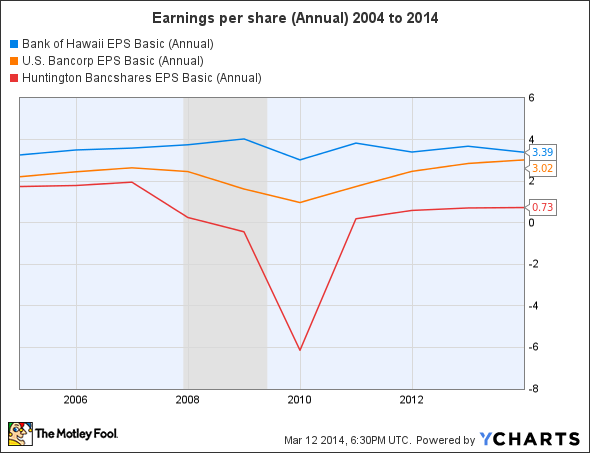 A big dividend yield means nothing if the business isn't making money. And there's risk betting on a regional economy. Especially one vulnerable to natural disaster and so dependent on a few key elements. With that said, Bank of Hawaii has been able to wade through storms in the past. This is because of strong management, and a supportive regional economy that should remain tough for decades to come.

Stability
When it comes to stability, investors can learn a lot from evaluating liquidity risk and loan-to-deposit ratio.

For a bank to be considered "well capitalized" it needs a tier 1 capital ratio above 6%. That ensures if the bank takes significant losses it could sustain operations. All three banks more than meet this requirement. What really tells the story, however, its the loan-to-deposit ratio.

The better the loan environment the higher we'll see this ratio creep up. In some cases -- as it did for many banks before the financial crisis -- the ratio will extend beyond 100%. Bank of Hawaii, however, has consistently kept its loans well within its deposits. Not a great sign if you'll looking for growth, but its good sign of security.

It has a moat, literally
Warren Buffett has talked about finding business with competitive advantage, or a "moat." Well, if you want to take Buffett's advice literally, you can't get much closer than Bank of Hawaii.

The region has four banks that control about 75% to 80% of the market. Bank of Hawaii is the second biggest player controlling about a third of the State's deposits -- and it holds the top position in residential mortgage lending.

The banking environment in Hawaii is "unusual." The population is small, the local competition is tough, real estate is expense, and it's not a easy as one would assume to recruit people to work in Hawaii. For these reasons, and perhaps many other, there are no major nationwide banks in Hawaii.

Huntington Bank and US Bancorp face and uphill battle attempting to go toe-to-toe with the powerful brand names and seemingly endless resources of today's big banks. It's a huge competitive advantage to avoid the fight completely.

The final pitch
Bank of Hawaii's loan portfolio is fairly balanced, though it leans toward its real estate specialty. It has a sticky and extremely low-cost deposit base. And it has strong management with a clear footprint and strategy that molds to the bank's identity.

U.S. Bancorp and Huntington Bancshares are fantastic banks in their own right, but for investors looking for a stable bank, surrounded by a growing economy, with a big dividend, however, you can't do much better than Bank of Hawaii.