Let's see what the numbers say about Sabesp (SBS).

Investors love stocks that consistently beat the Street without getting ahead of their fundamentals and risking a meltdown. The best stocks offer sustainable market-beating gains, with robust and improving financial metrics that support strong price growth. Does Companhia de Saneamento Basico ( SBS 1.80% ), commonly known as Sabesp, fit the bill? Let's look at what its recent results tell us about its potential for future gains.

What we're looking for
The graphs you're about to see tell Sabesp's story, and we'll be grading the quality of that story in several ways:

What the numbers tell you
Now, let's look at Sabesp's key statistics: 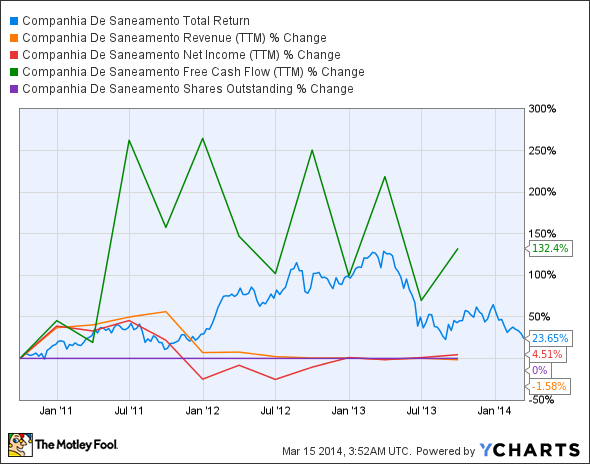 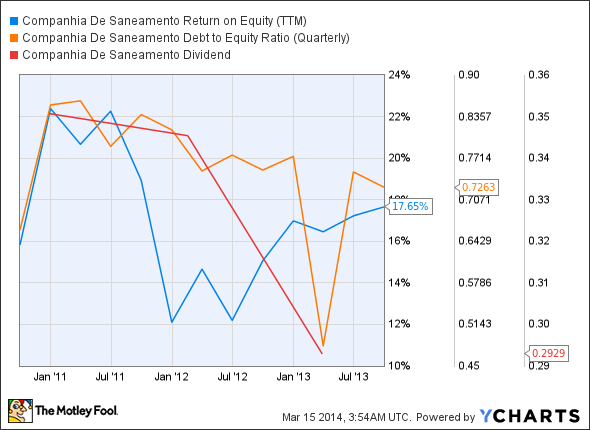 How we got here and where we're going
Sabesp doesn't come through with flying colors, but it's earned four out of eight possible passing grades nonetheless. Over the past few years, Sabesp's revenue and net income have flatlined because of a slowdown in Brazil's economy and due to political uncertainties in South America. The company's erratic annual dividend payouts can be difficult to accurately analyze, but wat we do know is that last year's payout was lower than 2012's, which in turn was quite a bit lower than 2010's -- the company did not pay any dividends in 2011. Will Sabesp be able to return to growth, or will Latin America's largest publicly traded water-services company going to find its pipes completely blocked in the near future? Let's dig a little deeper to find out.

Over the past few quarters, investor money has been steadily tricking into water utilities amid growing demand for clean water across the world -- or into most of them, at least: 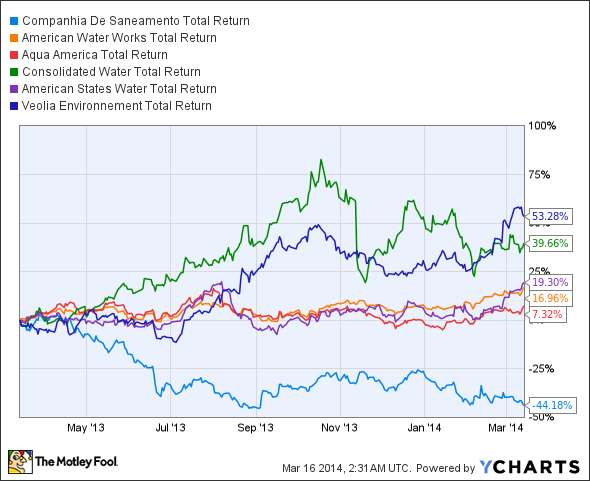 According to a recent World Economic Forum report, the water scarcity will be one of the top global risks in the 21st century. Fool contributor Sara Murphy points out that the global energy sector already depends on water for industrial purposes, and it's likely face decreasing output levels coupled with rising operational costs due to more water shortages. Only 3% of the world's water comes from freshwater sources, and less than 1% of all water sources are presently available for human consumption. The demand for fresh water is already increasing twice as rapidly as global population, which should bode well for Sabesp and American peers American Water Works ( AWK 1.50% ) and Aqua America ( WTRG 0.52% ), as well as French-based Veolia Environnement ( VEOEY 0.53% ), which is the world's largest water-services supplier.

Despite this positive long-term trend Sabesp's already lost over 40% of its value over the past year, and it's the only major water-services company to fall into such a hole. Early last year, the regulated water rate increase adversely affected the company's bottom line, and signs of slowdown in Brazil's economy coupled with ongoing political concerns in South America threatened to damage Sabesp's revenue growth later in 2013. Fool contributor Sean Williams notes that Sabesp has been trying to expand its infrastructure and consumer reach, which has resulted in extra debt burdens on its balance sheet. As a result, Sabesp is the only one of these water-services companies to suffer declining earnings per share over the past two years (Veolia rebounded from 2011's negative earnings in 2012, but its results don't show up on the following chart): 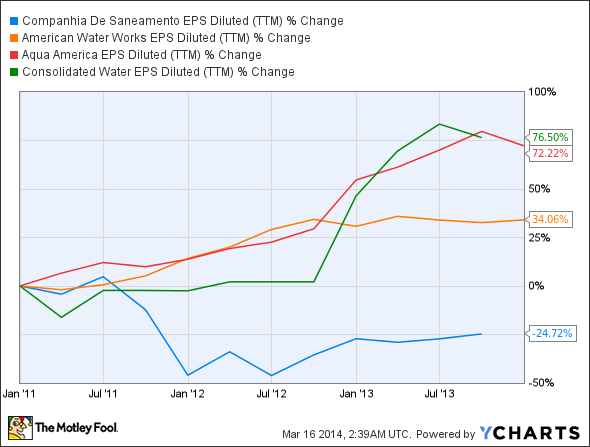 There are some positive signs out of Brazil's economy -- industrial production rose 2.9% in January, which is higher than economist estimates of 2.5% as polled by Bloomberg. However, Sabesp recently announced the offering of up to 30% in discounts to customers served by the Cantareira system if they reduce water consumption by at least 20% over their previous 12-month average. Droughts have sapped Cantareira to just 21.9% of its capacity, which is the lowest level ever recorded, but this belt-tightening certainly won't help the bottom line, even if it is better for the environment.

Putting the pieces together
Today, Sabesp has some of the qualities that make up a great stock, but no stock is truly perfect. Digging deeper can help you uncover the answers you need to make a great buy -- or to stay away from a stock that's going nowhere.