AstraZeneca (NASDAQ:AZN) investors have watched their company's net income plummet 74% over the past two years. If I were one of those shareholders, the last thing I would expect to hear is that the company is shooting for the moon, but strangely enough, that's exactly what it's doing. Surprisingly, it's a great idea.

Earlier this month AstraZeneca became the latest big player to climb on board the MD Anderson Cancer Center's Moon Shots Program, whose name was "inspired by America's drive a generation ago to put a man on the moon," according to the website. The program aims to defeat cancer through a big research collaboration. The hospital has already signed up GlaxoSmithKline (NYSE:GSK), Pfizer, and Johnson & Johnson. Here's why these industry giants are getting involved.

It's hard to overstate the excitement surrounding cancer immunotherapies. Analyst projections vary, but many think more than half of all cancer treatments will include some form of immunotherapy in the next decade. Dr. James Allison, whose seminal work helped lead to the first approved drug to exploit an immune checkpoint blockade, Bristol-Myers Squibb's (NYSE:BMY) Yervoy, was recently hired by MD Anderson and given over $40 million in immunotherapy research-related grants. As a leading researcher in immune-oncology, his involvement is a major boost to the Moon Shots Program.

What success looks like
Since its approval in March 2011, Yervoy has been a major success both clinically and commercially. About 22% of 1,800 advanced stage melanoma patients treated with Yervoy were alive after three years, a substantial improvement over previous treatments.

Despite its single indication for advanced melanoma, Bristol-Myers recorded $960 million in Yervoy sales last year. It's currently in trials for lung and prostate cancer, and investors are giddy with hopes of winning those supplementary approvals. MD Anderson's partners are hoping to get a Yervoy of their own.

Catch up
Yervoy acts on just one of several pathways that cancer cells use to hide from the immune system. Bristol-Myers and Merck (NYSE:MRK) are pushing candidates that act on the PD-1 pathway through late-stage trials. Bristol's nivolumab is in over 25 trials covering 9 separate indications. Merck has done far less with MK-3475, but has already started a rolling submission of a biologics license application for melanoma that it expects to complete in the first half of the year.

AstraZeneca has several immune checkpoint inhibitors in early to mid-stage development. Working with the field's pioneers in a center with access to a large variety of patients should accelerate their progress.

It's cheap
Building, staffing, and operating a research facility capable of these trials and research, like the MD Anderson Cancer Center, can be an enormous cost. If you want to know how bad it gets, look at the hermit of the pharmaceutical industry, Eli Lilly (NYSE:LLY). Lilly's CEO John Lechleiter regularly insists that its internal R&D can get the job done without a merger, and the company even seems to generally avoid collaboration agreements. Over the past six years Lilly has spent $28.9 billion on R&D with almost nothing to show for it. From 2008 through 2013, Lilly won FDA approval for just two new molecular entities. Analysts estimate they will contribute a measly $0.5 billion to Lilly's top line in 2018.

What winners look like
GlaxoSmithKline seems to collaborate with anyone that answers the phone. Over the same period the company spent $37.9 billion for 20 NME approvals worth an estimated $11.7 billion by 2018.

Glaxo's Moon Shot deal with MD Anderson could cost the company $335 million, plus royalties. That's a small price to pay for a potential blockbuster like Yervoy. Just as important is the limited risk involved in this sort of collaboration agreement. If MD Anderson can't deliver a winner, Glaxo can walk away. There's no facility to shut, and no employees to lay off. 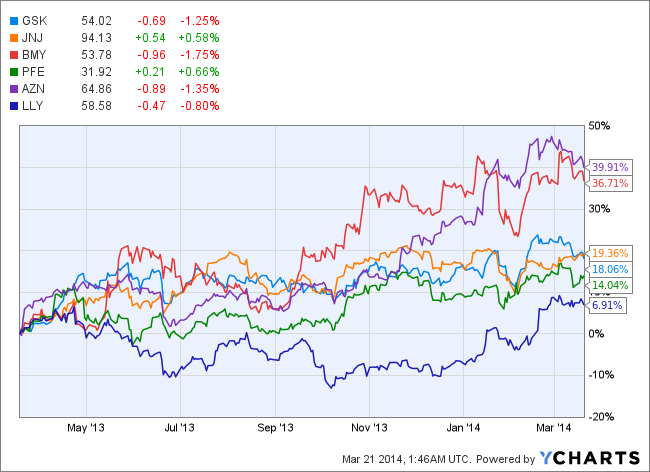 The important takeaway for investors is that partnerships with winners like the MD Anderson Cancer Center are worth a shot, even if they are aiming for the moon. Don't just take my word for it. Look at the chart above. Which would you rather own a company ready to partner with the likes of MD Anderson, or a hermit like Eli Lilly?