IBM is up more than 2% to lead the Dow Jones higher today. Here's why Big Blue is rising. 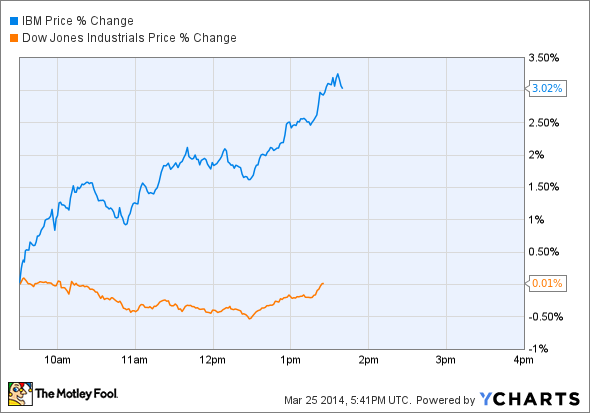 What's behind IBM's big move? It's actually a number of news items, working in concert.

The company sent out three relevant press releases this morning, each of which should have moved the stock on its own. Not by 2.6%, mind you, but that's what you get when you put them all together.

First, IBM reminded everyone of its Smarter Planet project, which promises to be a big growth driver for the foreseeable future. The company announced the 16 winners of its Smarter Cities grants, which will send teams of IBM consultants out for three weeks of forward-looking city planning work. The prizes are valued at $500,000 each, and the winners dot the globe, from Dallas and Dublin to Niigata, Japan and Abuja, Nigeria.

Winners from previous years have used their IBM know-how to improve road safety via data analysis, reduce crime through social media campaigns, and streamline processes for construction permitting. It's not a huge program in the context of IBM's $28 billion in annual operating expenses, but it's an effective Smarter Planet PR move that will keep the chains moving.

Second, IBM is teaming with data management veteran Pitney Bowes ( PBI -3.08% ) to deliver a new location service. The so-called BlueMix service is a cloud-based platform that will help customers draw deeper conclusions about relationships between people, places, and network effects.

BlueMix hits all the right buttons. It's a cloud service, delivered on smartphones and tablets, and ties into existing products from both IBM and Pitney Bowes. For IBM, this one taps into 1.2 billion existing users of Pitney Bowes' location analysis products, ranging from insurance companies to retailers.

For Pitney, it's a modernization and an upgrade of the old location services, layering IBM's data analysis brains on top of Pitney Bowes' decades of data collecting and reporting experience. Shares of Pitney Bowes also rose as much as 1.7% on the news.

Third, IBM crossed the last next-generation T and dotted another I, with a Big Data announcement in the Internet of Things segment.

Big Blue is working with French automaker Peugeot Citroen to develop a data collection and analysis framework for tomorrow's cars. The final system should collect information from engines, suspensions, traffic signals, the phone in the driver's pocket, and more.

Analyzing this torrent of driving-related data should eventually improve driving safety and lead to reliable self-driving cars. That end goal may be years away, but for now the data can customize your traveling experience in many ways.

Local businesses could reach your in-car infotainment systems with relevant deals as you pass by the store. Navigation systems could automatically route you around the wreck on I-75. Turning the data flow around, temperature and moisture readings from thousands of cars could improve weather reports and forecasts.

This is the big one that probably did most of the heavy lifting behind IBM's share price move. Everyone is working on car-based information systems, and for good reason. The hardware and software involved is a multibillion-dollar market already, tagged to reach $14.4 billion in 2016. But this $14 billion chunk of information-handling tools will touch a huge amount of information daily, unlocking perhaps a trillion-dollar total economic benefit.

So IBM is showing off all of its most modern technologies today, and the market is paying Big Blue back with a serious share price boost.