Investors typically don't value oil and gas assets all that highly. Most investors simply aren't willing to overpay for these assets given the volatile nature of the prices from the commodities produced from oil and gas wells. Because of this, exploration and production companies are typically valued with an enterprise value-to-EBITDA ratio in the low single digits.

On the other hand, what energy investors are willing to pay up to own are assets that produce stable income like pipeline and processing assets. When owned in a master limited partnership, these assets can be valued at an EV/EBITDA ratio that's twice as high, if not more, than an exploration and production company. This is why we've seen a number of E&P companies, including Devon Energy (NYSE:DVN), take advantage of this and unlock the value of these midstream assets by creating (or merging with) an MLP.

Here are two more companies that have hidden assets that could join Devon by pursing a transaction that should unlock the value of the midstream assets these companies own.

At its recent analyst day SandRidge Energy (NYSE: SD) CEO James Bennett suggested that the company's stock was worth more than twice its current price. One reason for this is because investors aren't giving SandRidge Energy any credit for the $470 million in capital the company invested to build its extensive saltwater disposal system as seen in the slide below. 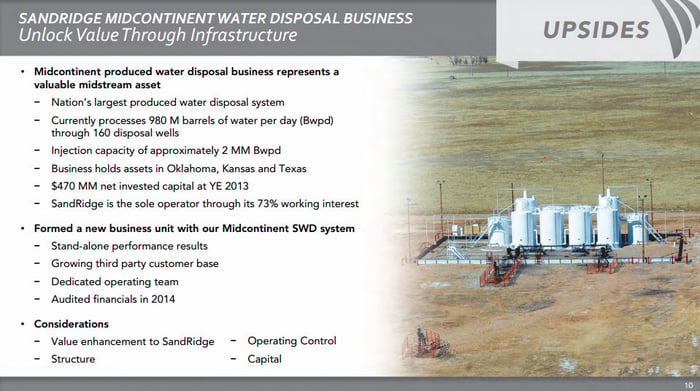 Bennett thinks that if SandRidge Energy created an MLP to hold these assets, that business would be valued between eight and 11 times EBITDA. Given that the asset produces $135 million in EBITDA, Bennett values the business at $1.15 billion at a nine times EBITDA multiple. Therefore, by simply creating an MLP, the company can unlock substantial value and literally create half a billion dollars in value. This is why SandRidge Energy is slowly beginning to separate that business, including forming a new unit that will have audited financials this year.

If investors don't begin to give the company credit for the assets, we will likely see it pursue a value-unlocking transaction. While the company could follow Devon Energy by merging these assets into another MLP, I don't see that happening. Instead, I think we'll see SandRidge Energy create its own MLP with a small ownership position of its saltwater disposal assets and then take that public as it did with its three royalty trusts. That way, it can maintain control of the assets and use the MLP as a funding mechanism to fuel production growth.

Eureka! This asset is undervalued
Magnum Hunter Resources (NYSE: MHR) is a bit further along in unlocking the value of its midstream business unit Eureka Hunter. The company already completed a $200 million partial monetization of the asset with ArcLight Capital Partners. In that transaction, it sold a 42% stake in the company. However, Magnum Hunter Resources has continued to invest in Eureka Hunter by constructing new pipeline, which has grown the value of that company.

Those investments combined with a higher multiple for the EBITDA generated by these assets lead Magnum Hunter Resources to believe that its stake in Eureka Hunter is worth between $420 million to $570 million. The company isn't in a rush to unlock this value given its current $257 million to $325 million non-core asset divestment program that's currently in process.

That being said, at some point in the future it's quite likely that Magnum Hunter Resources will look to realize more value from these assets. This could include participating in an initial public offering of an MLP or an outright sale of the assets once ArcLight decides to realize some of the value it helped create in building Eureka Hunter.

Investor takeaway
Owning a company that has hidden assets is a nice way to earn strong returns over the long term. Both SandRidge Energy and Magnum Hunter Resources own assets that aren't being valued as highly by the market because the assets are hidden among the exploration and production assets each company owns. At some point, the management teams of both companies will realize that these assets are better off being owned elsewhere, which will unlock some nice value for investors.