Las Vegas Sands (NYSE:LVS) is in a position of strength to continue profiting from booming gaming demand in Macau, the company is attractively valued in comparison to peers such as Wynn Resorts (NASDAQ:WYNN), MGM (NYSE:MGM), and Melco Crown (NASDAQ:MLCO), and management has ambitious plans for growth in the years ahead. This profitable casino looks like a winning play.

A high-quality business
Macau is the only region in China were gambling is legalized, and Las Vegas Sands is one of only six companies in the world with a license to operate casinos in the region. The company also has operations in Singapore and the U.S., but Macau is by far the main growth driver for Las Vegas Sands. 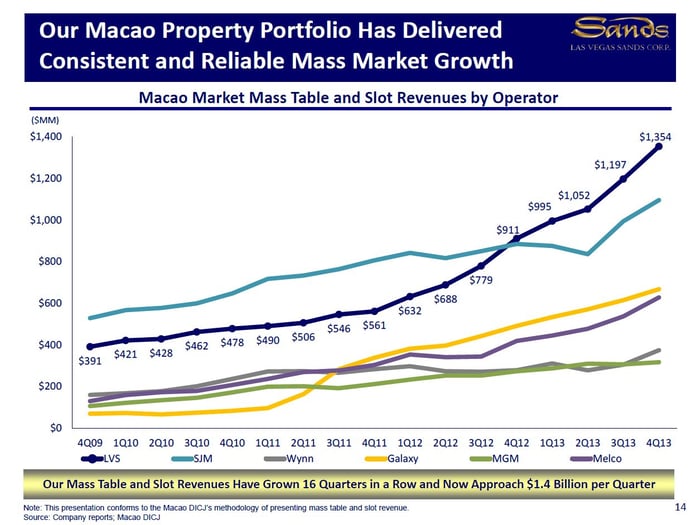 The company owns a leadership position in the mass market segment, a profitable niche with enormous potential for growth in the long term. China's middle class is expected to triple between now and 2023, and discretionary spending in areas like gaming and leisure is particularly sensitive to rising income levels, so the gaming industry in Macau is supported by strong economic tailwinds.

Melco Crown is a pure play in Macau, and the company is firing on all cylinders, with revenues increasing by 27% during the fourth quarter of 2013, and net income per share more than doubling during from $0.2 to $0.41 per share.

MGM is still losing money on a net income level, but the company is reaping huge benefits from its expansion in Macau lately. While total revenues increased by 10% during the fourth quarter of 2013, MGM China delivered a much stronger increase of 27% versus the prior year.

Las Vegas Sands trades at a reasonable valuation when it comes to both trailing P/E and forward P/E ratios in comparison to peers. Besides, the dividend yield of 2.54% is especially attractive considering it still offers plenty of upside room.

The company announced a big dividend increase of 43% for 2014, from $0.35 quarterly to $0.50 quarterly per share. The dividend payout ratio is still quite comfortable at less than 53% of average earnings estimates for 2014, so Las Vegas Sands has plenty of room for further dividend increases in the years ahead

Growth opportunities
Las Vegas Sands has ambitious plans for growth, both in Macau and in other Asian markets. The company is planning to inaugurate The Parisian Macau in late 2015; this project will be Las Vegas Sands' sixth property in Macau, adding 3,000 rooms to its capacity in the region.

All in all, management is planning to have more than 12,600 hotel rooms and apartments in Macau by 2017, and this would make Las Vegas Sands the leading player in the region by a considerable margin, with a market share of 44% among gaming operators. 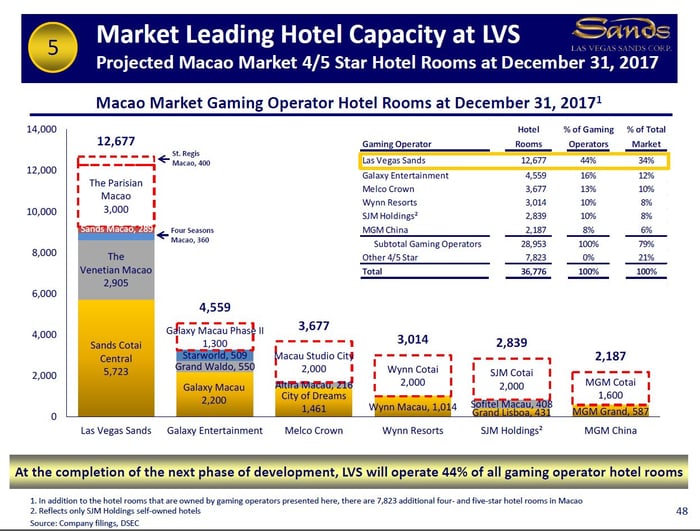 Not only that, but the company is actively perusing opportunities for expansion in countries such as Japan, South Korea, and Vietnam. Being a big operator in the region with a remarkable track record of success, Las Vegas Sands is in a position of strength to compete for growth opportunities in these markets.

Bottom line
Las Vegas Sands owns a leadership position in Macau, arguably the most promising gaming market in the world. Opportunities for growth are still abundant, not only in Macau but also in other Asian markets, and the stock trades at reasonable valuation ratios when compared against industry peers in terms of price to earnings and dividend yield. Those are three powerful reasons to make a bullish bet on Las Vegas Sands.