NVIDIA's analyst day was packed with helpful numbers that help demonstrate one key thing: the gaming GPU business is alive and well.

On the same day as NVIDIA's ( NVDA -0.35% ) GPU Technology Conference, NVIDIA held its analyst day. At the analyst day presentation, CEO Jen-Hsun Huang, CFO Colette Kress, and the various division heads laid out a compelling case for the viability of NVIDIA's long-term growth potential. While there is more to talk about that can be covered in a single piece, it's very much worth talking about NVIDIA's largest -- and most important -- business: GeForce.

What is a discrete GPU?
In any kind of personal computing devices (notebook, desktop, tablet, phone), a critical component of the system is the graphics processing unit, or GPU. This is a specialized processor that is extremely good at doing mathematical operations very quickly and efficiently, and it also contains specialized hardware to handle the various concepts in 2-D/3-D graphics rendering.

In a phone, tablet, and mainstream PCs, the GPU is integrated onto the same piece of silicon as the brains of the PC, known as the central processing unit, or CPU, as shown in this image of an Intel ( INTC 1.42% ) Core i7 here: 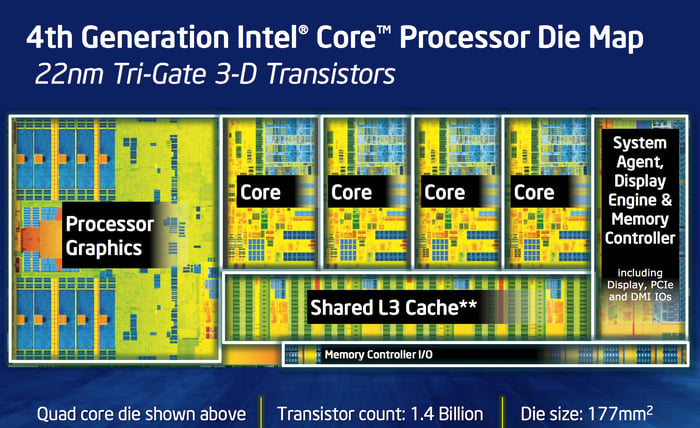 However, for gamers who need more performance than what the integrated graphics engine on board the CPU can provide, both NVIDIA and AMD ( AMD -2.06% ) offer GPUs that you can add in. NVIDIA's offering is called GeForce and AMD's Radeon.

Why is GeForce still doing well?
At NVIDIA's analyst day presentation, the company revealed some interesting numbers about its GeForce business that should be encouraging to long-term NVIDIA shareholders (shown here): 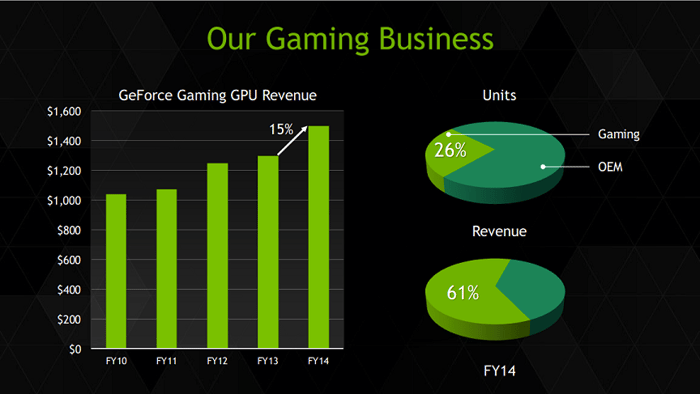 Notice how NVIDIA breaks down revenue and units into gaming and OEM. The gaming GPUs (which, in fact, are sold to OEMs so don't get confused) are higher-performance parts that offer pretty substantial performance uplift from both the OEM-oriented low-end GPUs and the integrated graphics found on the Intel/AMD PC processors.

What's more interesting, though, is how despite the fact that the gaming GPUs make up a fairly low portion of the unit volume mix, it is 61% of the revenue base and likely to continue to grow over time as the GeForce gaming business grows and the OEM business continues to see weakness.

But that's 39% of the company's consumer GPU business!
There's no getting around the fact that while GeForce gaming GPUs are dominant in the revenue mix -- a good 39% of the revenue base and a whopping 74% of the units are still tied to non-gaming OEM units. The initial argument might be, then, that this business is going away as Intel and, to a lesser extent, AMD improve their integrated graphics offerings.

However, if you look at this next chart, you'll see that while this is indeed a cause for concern, the GPU business taken as a whole (which includes professional workstation graphics and high-performance computing) is still -- at the end of the day -- growing: 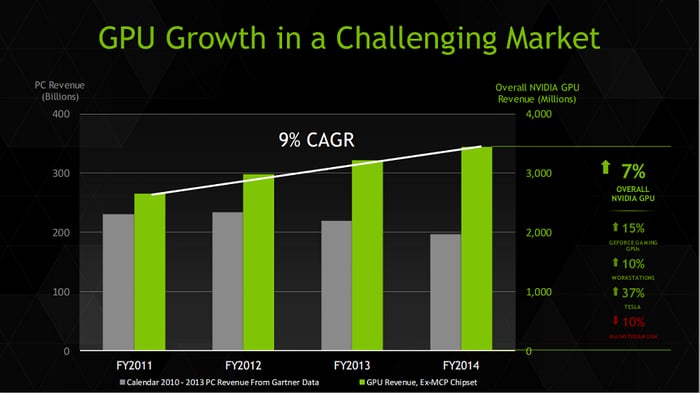 Now, what's even more interesting is that if you do the math, NVIDIA could still actually eke out about 5.25% growth assuming a GeForce business (61% of revenues) growing at 15% and a mainstream OEM business declining at about 10% (39% of revenues). Further, given that PCs themselves were down 10% last year, NVIDIA's mainstream OEM decline is actually declining right along with the PC market, which tends to suggest that the decline is at least as much secular as it is structural.

Foolish bottom line
NVIDIA gave an excellent presentation at its analyst day that gave investors a lot more data to work with than we had previously had. While NVIDIA does face a number of key challenges, it has been very successful at addressing and ultimately triumphing over them and the market has rewarded the shares handsomely over the last year for it.