What does George Soros see in Penn Virginia Corp (NYSE: PVA)? this company hasn't posted a profit in the past five years! That hasn't stopped Soros from buying up 9.2% of Penn Virginia's shares though. Should you follow suit or has Soros made the wrong call?

To achieve such high levels of growth, Penn Virginia has been utilizing the best drilling techniques around. After growing initial and 30-day production rates per frac stage by ~25% and ~33% respectively last year, Penn Virginia is doing its best to make the most out of each well.

A trend investors should love
Innovation in the Eagle Ford is widespread, which points toward a bullish trend forming in the area for E&P players. EOG Resources (NYSE:EOG), the largest crude producer in the Eagle Ford, has been able to significantly boost the ultimate recovery rate per well in the region. To do so, EOG Resources increased the average initial production rate per well by 10.5% in 2013. EOG Resources is bringing better wells online, but it is also keeping a tight lid on costs. Completed well costs fell by $800,000 last year to $6.1 million, and management is guiding for that to fall even further, down to $5.5 million this year.

Cash flow problems
Unfortunately for Penn Virginia, it seems to have a problem living within its means. Over the past five years Penn Virginia has posted a net loss each year, even as EBITDAX grew from $179.7 million to $316.2 million over that time period. To fund a continuous loss someone has to be footing the bill. In this case, Penn Virginia issued senior notes, $300 million of which is due in 2019 and $775 million is due the year after. On top of issuing debt, Penn Virginia also took out $206 million from its $425 million revolving credit facility. 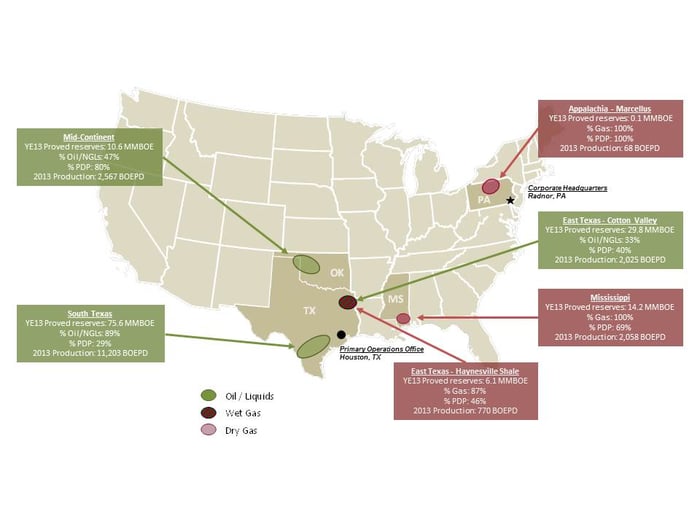 Foolish final thoughts
What does George Soros see in this company? Massive upside in the Eagle Ford. Several analysts have speculated that Penn Virginia could be sold to a larger oil producer, like EOG Resources, to gain a stronger foothold in one of America's best shale oil plays. I'm not saying you should bank on Penn Virginia being sold for a hefty premium, but due to its relatively small size (market cap of around $1 billion) versus its peers (EOG Resources has a market cap of $52 billion), it seems that could be a possibility, especially since George Soros has taken such a large stake in the company.

Even if George Soros' end game isn't to get management to sell the company, Penn Virginia still has a lot to offer investors. Only 29% of its Eagle Ford acreage is developed, leaving room for massive reserve upside. Penn Virginia is also steadily moving toward a more liquids-weighted production mix. Management is calling for Penn Virginia's production mix to shift from 58.4% liquids in the first quarter of 2013 to 75% in 2014, which will propel margins upwards and help alleviate its funding problems.

The biggest downside to Penn Virginia is that it isn't a profitable company yet and carries a heavy debt burden. Even so, investors who are willing to tough it out could stand to make market-beating returns. Asset sales and the building of an oil gathering system in the Eagle Ford create plenty of catalysts this year, but the biggest catalyst of all would be Penn Virginia achieving fully self-funded operations by 2016-2017. If that happens the sky's the limit, assuming management keeps a watchful eye on debt maturing as well.