Please ensure Javascript is enabled for purposes of website accessibility
Free Article Join Over 1 Million Premium Members And Get More In-Depth Stock Guidance and Research
By Aimee Duffy - Mar 29, 2014 at 7:00AM

You'll be hard-pressed to find a craft beer aficionado who has anything nice to say about big brewers like Anheuser-Busch InBev or MolsonCoors. Here's one reason that should change.

The craft beer versus mega brewer narrative is one of the better underdog, David and Goliath stories out there right now. Craft brewers care about ingredients and taste and are slowly but surely grabbing market share from the big boys. The small brewers focus on quality and forgo the multimillion-dollar Super Bowl ads and billion dollar acquisitions of global competitors like beer behemoths Anheuser-Busch InBev and MolsonCoors Brewing ( TAP 0.81% ), endearing them to millions.

But when it comes right down to it, craft brewers need their big beer rivals, now more than ever. That's because macro brewers like MillerCoors -- the SAB Miller and MolsonCoors joint venture in America -- are spending large sums of money on industry innovation geared toward water conservation -- innovation that small brewers could not afford to develop on their own.

The slowing drip
Water is something many Americans take for granted. Not only is the water we drink clean, but its supply is ample. Or at least, it used to be.

California is currently dealing with its worst drought in 165 years. While it is certainly the most devastated state from a U.S. agriculture perspective, it is not the only state suffering: 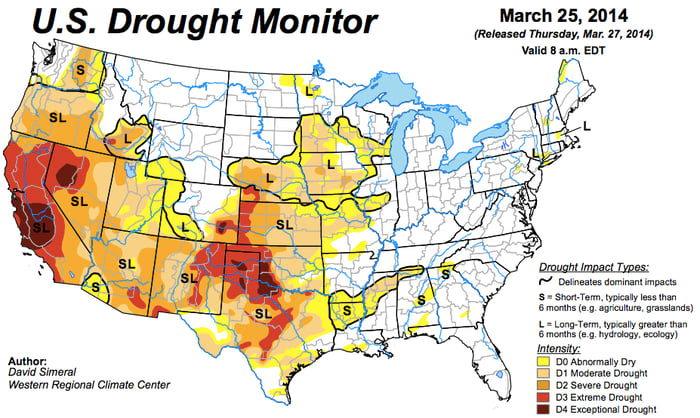 Take, for example, Colorado. MillerCoors' most famous brewery, and the nation's largest, is in the city of Golden. For the last six years, it has been dealing with below-average run-off from the Colorado Rockies because of below-average snowfall in the mountains. The run-off meets 85% of the water needs for the entire region. With few options for an alternative water supply, conservation is taking on an unprecedented level of importance.

Water's importance to beer is obvious: crack open a cold one, and it is 95% water in there. Less intuitive is the sheer volume of water needed to produce the grains used in the brewing process. When you factor in the entire lifecycle of a can of beer, growing its ingredients accounts for an astounding 90% of its water needs.

So, how has MillerCoors made these changes? By spending money, of course.

Big beer money
The company employs not one, not two, but eight agronomists who work directly with the farmers who supply ingredients to its breweries. In 2011, MillerCoors gave a $1 million grant to the Nature Conservancy to turn a standard barley farm into a state-of-the-art irrigation innovation center. The nonprofit in turn unleashed its team of irrigation specialists on the land, who then implemented a flurry of changes ranging from soil sensors to redesigned spigots. The new farm saved 270 million gallons of water in its first two years, and 400 million gallons in its first three.

It's an impressive commitment, but it is not one that every brewer can make because of the sheer cost involved. MillerCoors will innovate and implement, discovering best practices and driving costs down. Eventually, these new techniques and technologies will become the new industry standard. That's something that will benefit all brewers, great and small.