Shares of Chipotle Mexican Grill (NYSE:CMG) have been on a tear since the beginning of 2013, nearly doubling during that time. The chain of quick-service burrito restaurants has rapidly expanded while its earnings have grown at a blistering pace, and its over 1,500 locations generate $3.2 billion in revenue each year. While the popularity of Chipotle is undeniable, so too is the unrealistic valuation given to the shares by an overly exuberant market. While the company certainly has real growth prospects, the expectations of investors have sharply diverged from reality.

Comparing Chipotle
There is no doubt that Chipotle is a wonderful company and that its dedication to quality ingredients differentiates it from many of its peers. Operationally, Chipotle is top-notch with a high operating margin and an exceptional return on equity. However, the return that an investor achieves depends on the price paid for the shares, and in that regard Chipotle doesn't look so great. Here is a chart that compares Chipotle with Panera Bread (NASDAQ:PNRA), a smaller chain with similar characteristics, and McDonald's (NYSE:MCD), the global fast-food behemoth. 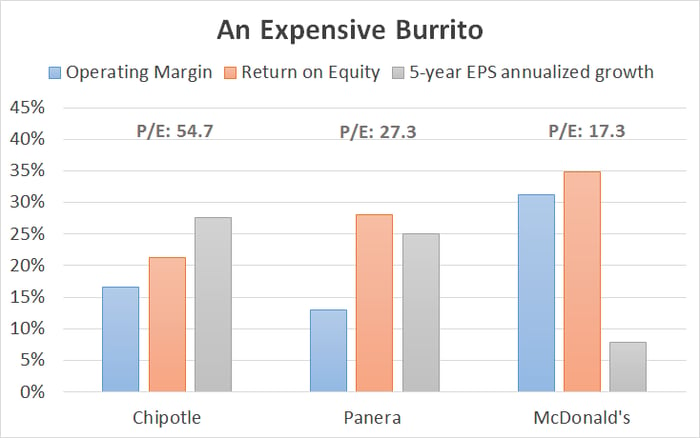 It's surprising, then, to see that Chipotle is trading at twice the P/E ratio of Panera. While Panera sports a P/E ratio of about 27, a high number but one that is possibly justifiable given the company's growth, Chipotle's P/E ratio of 54 simply makes no sense at all. This isn't some upstart tech company that we're talking about, it's a chain of fast-casual restaurants.

The arguments for Chipotle revolve around the company's fantastic growth prospects, not only with its namesake restaurants but also with the company's concept Asian restaurant, Shophouse. While the company certainly has plenty of room to grow, it will face significant challenges as it becomes larger.

First, one of Chipotle's main draws is the quality of its ingredients, and as the company grows larger it will become more difficult to source high-quality ingredients. The company has already had some issues on this front, as a shortage of antibiotic-free cows caused its stores to occasionally resort to serving conventionally raised beef. This problem will only get worse as Chipotle grows, and maintaining Chipotle's rapid growth may require sacrifices on the quality front which would thus diminish the company's key advantage.

Another issue is the question of whether or not the Chipotle concept translates well to international markets. Almost all of Chipotle's restaurants are in the United States, with just 16 locations in other countries. There are two conclusions that can be drawn from this. First, the company has a huge opportunity in international markets. Second, the Chipotle brand is unproven outside of the United States.

There is no guarantee that Chipotle can achieve the same success abroad as it has in the United States, and investors should not treat this as a foregone conclusion. Another issue, going back to my first point, is that sourcing quality ingredients in markets like China and India is likely far more difficult than it is in the United States. The assumption that Chipotle won't enter markets abroad in a meaningful way until the ingredients become available may mean slower growth than many assume.

Chipotle has impressive margins, with its 16.5% operating margin besting that of Panera by about 3.5 percentage points. Looking at McDonald's metrics, it would appear that Chipotle still has plenty of room to grow its margins. McDonald's managed an operating margin in excess of 30% in 2013, nearly twice that of Chipotle. However, McDonald's has a very different business model than Chipotle, with a large portion of its restaurants franchised. Chipotle owns all of its restaurants, so the company will never even come close to McDonald's margins. McDonald's makes a lot its money by collecting franchise fees and rent, not selling burgers, and that's why the company's margins are so high. If anything, the difficulty in sourcing quality ingredients will lead to higher food prices and lower margins for Chipotle in the future.

The bottom line
Chipotle is a wonderful, well-run company, but investors are ignoring the issues that could sabotage the kind of growth that a P/E ratio of 54 demands. Chipotle trades at twice the P/E ratio of Panera, a company with similar characteristics, which is a clear sign that optimism has driven Chipotle's stock price up too high. Can the stock go higher? Sure. However, the stock no longer reflects the company's fundamentals, and that's a dangerous situation for overzealous investors.