Please ensure Javascript is enabled for purposes of website accessibility
Free Article Join Over 1 Million Premium Members And Get More In-Depth Stock Guidance and Research
By Patrick Morris - Mar 31, 2014 at 7:30AM

Although at first glance Under Armour and Berkshire Hathaway seemingly have nothing in common, it turns out the CEO of the athletic company would do well to call Warren Buffett.

The elephant gun
In his 2010 annual letter, Buffett noted his focus was to increase the earnings of Berkshire Hathaway, and in order do that he said:

Much has been made of the elephant gun remark, and Buffett noted one of his disappointments in 2012 "was my inability to make a major acquisition. I pursued a couple of elephants, but came up empty-handed."

The elephant
When it comes to the elephant, Buffett notes Berkshire Hathaway is looking to spend between $5 and $20 billion, and "the larger the company, the greater will be our interest." At last check, Under Armour has a market capitalization of a little more than $12 billion, so even at a 50% premium, it would still fall within that range.

Buffett has also outlined the six fundamental criteria all must be met when Berkshire Hathaway makes an acquisition. And as it turns out, Under Armour meets every one of them.

1. Large purchases (at least $75 million of pre-tax earnings unless the business will fit into one of our existing units)
Last year, Under Armour's income before taxes stood at $261 million. One down, five to go.

2. Demonstrated consistent earning power (future projections are of no interest to us, nor are "turnaround" situations)
The bottom line at Under Armour over the last five years reveals it hasn't just been consistent in delivering strong earnings, but it's been consistent at significantly growing those earnings as well: 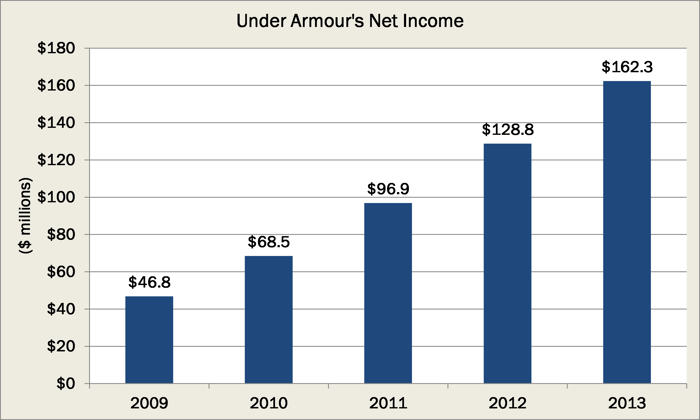 3. Businesses earning good returns on equity while employing little or no debt
Under Armour has a minuscule debt-to-equity ratio of 0.15. In addition, it has a phenomenal return on equity of 17.8%.

4. Management in place (we can't supply it)
The 41 year old Kevin Plank, founded Under Armour in 1996 and has served as CEO and Chairman ever since. Its CFO, Brad Dickerson, has been at the firm for nearly 10 years. Chief Operating Officer Kip Fulks, has been there since 1997. When you consider its top three executives have a combined tenure of 45 years -- albeit not exclusively as executives -- at a firm that has only existed for 18, there is no denying its management is "in place."

5. Simple businesses (if there's lots of technology, we won't understand it)
While it relies on technology and research to ensure it provides great products to its customers, at its core Under Armour makes apparel, footwear, and accessories, which are all simple and easy to understand.

Not to mention, Berkshire Hathaway already owns Brooks Shoes, so it isn't as though fitness apparel is something Buffett can't grasp.

6. An offering price (we don't want to waste our time or that of the seller by talking, even preliminarily, about a transaction when price is unknown)
And here is where the question lies.

Unlike countless other billionaire investors, Buffett isn't one to engage in hostile takeovers or insist a firm give in to his demands. Instead, he seeks firms to approach him before joining the Berkshire Hathaway umbrella of companies.

Under Armour delivers remarkable answers across the other five criteria, but if this were to truly occur, Kevin Plank would have to be the one who approached Buffett with a the price for the company.

Buffett is known for his remark, "It's far better to buy a wonderful company at a fair price than a fair company at a wonderful price." One has to believe a phone call to Buffett would not only reward both Plank and shareholders of Under Armour thanks to a premium valuation -- after all, it does meet all five of the criteria handily -- but also Buffett and those of Berkshire Hathaway as well.