ConocoPhillips (NYSE:COP) is expected to hold its annual Analyst Meeting this Thursday, April 10. That event is always well worth an investor's time and I'd highly recommend tuning into the webcast. With that event in mind, here are three questions I'm hoping we'll see the company address as its answers will really give investors a better idea which direction the company plans to head through the end of the decade.

What's the future of Alaska?

ConocoPhillips is one of a number of companies that is increasing Alaskan oil production thanks to some new tax laws. Not only is the company looking to increase conventional oil production, but ConocoPhillips is part of the venture looking to join the state in exporting natural gas. On top of that the company could one day join Royal Dutch Shell plc (NYSE:RDS.A) (NYSE:RDS.B) in its pursuit of oil in the Arctic waters off of Alaska.

Those Arctic drilling plans in the Chuckchi Sea will likely remain on hold for a while as Shell's drilling plans were put on pause again after a court ruling in favor of environmental and native groups halted the drilling. However, that doesn't mean that Alaska won't become an important growth driver for ConocoPhillips. That's why investors should see what the company has to say about rig counts in the state as well as its future plans for growth. Further, anything it says about its plans in the Chuckchi Sea will help to clear up the current uncertainty about the company's production growth plans through the end of the decade.

When can we expect oil to flow out of the Gulf of Mexico?
Last year was a great year for ConocoPhillips in the Gulf of Mexico. The company and its partners which include companies like Anadarko Petroleum Corporation (NYSE:APC) made a number of large oil discoveries including Shenandoah and Coronado. We'll likely see more discoveries in the future as ConocoPhillips has amassed 2.2 million net acres in the deepwater of the Gulf that it'll be exploring in the years ahead.

At this point the Gulf of Mexico represents one major opportunity for the company. However, it hasn't yet announced when investors will see the Gulf fuel any value as the company isn't yet producing from the region. Investors will want to see if ConocoPhillips and Anadarko have any firm plans to begin turning these prospects into production.

What's the next big area of growth?
As the following map from a recent investor presentation details, ConocoPhillips has a number of both conventional and unconventional exploration opportunities within its current portfolio. 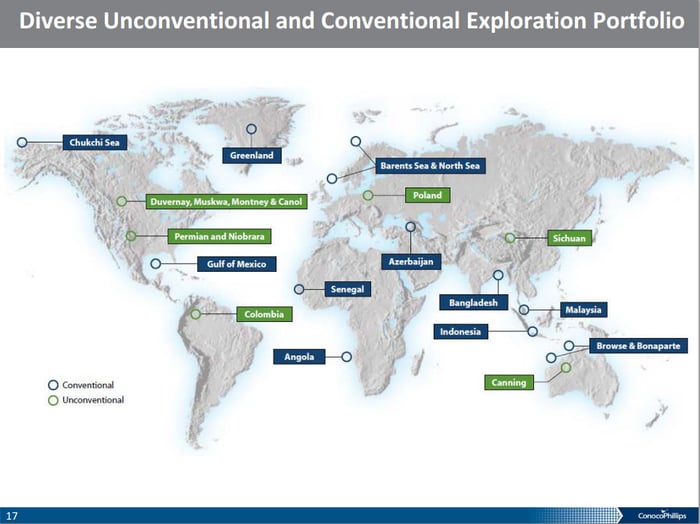 We know that the Gulf of Mexico should be a big future production growth driver for the company. What I'm interested in is to see what ConocoPhillips sees as the next big driver. The company has talked about its unconventional prospects in the Permian Basin of Texas as well as the Niobrara in the Rockies. Beyond that we know that the company is actively exploring international opportunities in Canada, Colombia, Poland, the Barents Sea, offshore Angola and offshore Senegal. What I'd like to know is if any of these areas are emerging to the point where we'll see any production before the end of the decade. For example, it will be interesting to see if the recent problems with energy rich Russia could push Poland to really focus on unlocking its own shale plays and what role ConocoPhillips might play in the country's future.

Investor takeaway
ConocoPhillips is still in the early stages of its five year plan to grow production and margins by 3%-5% annually through 2017. However, as a long-term investor I'm curious what the company has planned beyond 2017. That's why I'm really interested to see how the company answers these three key questions at its analyst day later this week.