The digital revolution hasn't just affected the phone in your pocket, it's reshaped everything from toys to sports. And thanks to Topps, even a product as simple as the trading card is now digitized.

That's quite an accomplishment in an industry many assumed to be in decay. The New York Times, for example, reports annual baseball card sales once flirted with $1 billion in the early '90s. Now they total somewhere near $200 million a year, according to the MLBPA. Although likely smaller, it's assumed sales of football and soccer cards experienced a similar drop off.

Across baseball, football, and soccer, the company says it's sold around 35 million packs in the past year. Assuming an average cost of $3 each, that's over $100 million -- a lot of dough for Topps. It doesn't regularly share its financials, but in 2007 -- its last public 10-K -- total non-confectionery sales were a little above $175 million. Given that, it's safe to say going digital has been nothing short of a windfall. So how'd the company do it?

It all starts with baseball
A major growth driver is Topps' MLB trading card app, BUNT.

By allowing users to collect digital cards that appreciate or depreciate based on real-life performance, it intelligently capitalizes on the fantasy sports boom. Like fantasy baseball, players in BUNT can be traded, and the better the real-life counterpart is hitting or pitching at the moment, the more the card is worth. If you own Bryce Harper, for example, any home run he hits adds to his card's value.

Judging by App Annie data, BUNT is the seventh most popular iOS sports app in America, and in terms of revenue, it's No. 2. Given the $100 million figure I estimated above, it's reasonable to think BUNT is responsible for a third of this, or about $33 million. That equates to about $90,000 per day, a nice middle ground between über-popular apps like Clash of Clans and and sports games like R.B.I. Baseball 14. 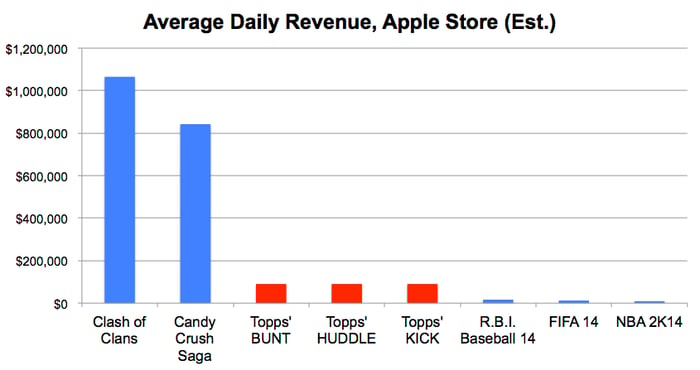 What about football and soccer?
The company also has similar iOS offerings for football and soccer fans: HUDDLE and KICK. The latter lets users collect and trade their favorite Barclays Premier League athletes, while HUDDLE is partnered with the NFL. Like BUNT, there's a heavy dose of fantasy sports mixed into the gameplay.

App Annie reports that in-season, both rank among the top 10 highest-grossing sports apps. Given this, it's reasonable to think each makes a similar amount of money as BUNT.

The bottom line
Topps should continue to make millions from its baseball, football and soccer apps, and I don't expect the company to rest on its laurels. It also has its fingers in the WWE and Star Wars franchises. Both have enormous fan bases who would gladly buy and sell digital trading cards. Remember, Topps has experienced success in what many considered to be a dying industry by innovating -- more is likely to come.