Yum! Brand's Taco Bell is waging a breakfast war against McDonald's. But there's more to know about the Bell's parent.

The company owns Pizza Hut, Taco Bell, and KFC and operates 40,000 stores across 125 countries. Yum!'s brands have worldwide name recognition, but there are still some things investors might not know about the company. 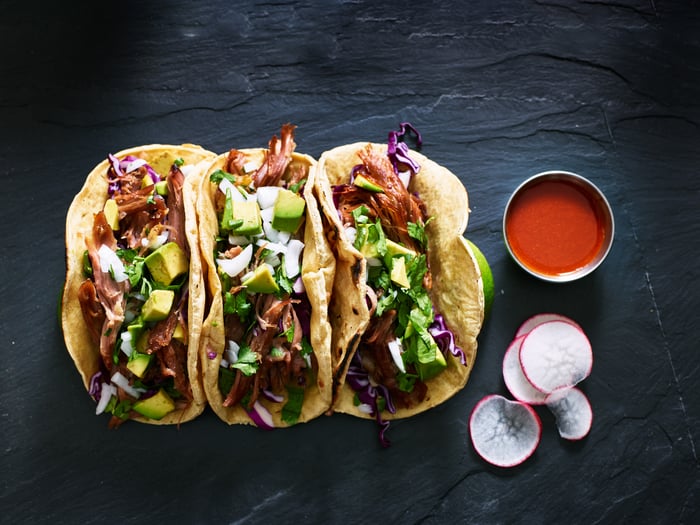 1. The company was once owned by Pepsi
Ever wonder why most Yum! Brands restaurants serve Pepsi products? Yum! started out as Tricon Global Restaurants, which was a subsidiary of PepsiCo until the spin-off in 1997. Tricon owned Pizza Hut, Taco Bell, and KFC. It acquired seafood chain Long John Silver's and root beer chain A&W Restaurants in 2002. The company then changed its name to Yum! after its ticker symbol.

Yum! divested Long John Silver's and A&W Restaurants in 2011 to narrow focus and concentrate on overseas expansions for the core brands.

2. Taco Bell is the strongest domestic brand
There's a reason Yum! has thrown so much weight behind Taco Bell's breakfast promotions: The chain has become the company's strongest brand in the United States. Take a look at the same-store sales from the past year.

Taco Bell's higher comps could come from a combination of less direct competition and better product loyalty. The Doritos Locos Tacos, for example, sold half a billion units in their first year.

Pizza Hut has to compete with the likes of Domino's and Papa John's, plus the multitude of locally owned pizzerias. KFC has Popeyes and local joints, but both brands have more potential overseas, where Taco Bell doesn't have as strong of a presence.

3. China's the recovery market due to poultry scandal
KFC ended 2012 with same-store sales growth of 3% in China. But the following year ended with a 15% drop. What happened?

In late 2012, Chinese officials revealed an investigation into KFC's chicken suppliers because of concerns with the level of antibiotics in the meat. KFC soon after cut ties with more than 1,000 suppliers and promised to improve its quality-control process. The controversy as well as avian flu outbreaks in the country have continued to make Chinese diners cautious about eating at the chicken chain.

But if KFC can keep the supply issues in the past, the brand's performance in China should improve with time. And it's vital that KFC improves in this market, since 78% of the country's KFC units -- and all of the Pizza Hut units -- are company-owned, compared to 47% in India and 5% in the United States. So Yum! doesn't have the protective cushion that deep franchising can allow due in part to the franchising fees paid back to the parent company.

4. But India's the growth market
Yum! has a new segment reporting method that highlights what the company considers the key markets. In the past, Yum! has split its segment reporting into U.S., China, and Yum! Restaurants International, or YRI. The latter segment covers basically any country where Yum! has restaurants that isn't the U.S. or China. Represented countries include Latin America, the U.K., and Korea.

But as of Jan. 1, Yum! will now combine the U.S. and YRI segments. The company will still break out each brand's performance individually, but the results for U.S. and YRI will meld -- partly because YRI has more emerging markets with higher comps to offset the weak domestic performance. China will remain its own segment, further showing the importance of that country while also keeping its negative numbers from dragging another segment down. India will also remain a solo segment.

Why does India remain solo? In the fourth quarter alone, Yum! increased the number of traditional restaurant units in the country by 24%, year over year, but those totals still came up to low numbers; KFC, for example, only had 361 units there compared to the nearly 4,600 in China. And, as mentioned above, India comes only second to China in the percentage of company-owned KFC units. All five of the Taco Bells in the country as of year's end were also Yum!-owned.

5. Yum! lags behind McDonald's
So, Taco Bell is Yum!'s strongest brand domestically, and Pizza Hut's holding down China while KFC recovers. But how does Yum!'s global performance compare to competitor McDonald's?

Yum!'s only a bit larger, with 40,000 stores compared to McDonald's 35,000, so the companies make for a fairly even comparison. And comparing global same-store sales doesn't look pretty for Yum!.

McDonald's had its own rough year because of some menu misfires, but the same-store sales look worlds better than Yum!'s. But without China added to the mix, Yum!'s numbers improve considerably and, in some cases, beat McDonald's.

So how would the Yum! numbers look if China wasn't tugging everything else down? Let's set China's year-over-year comps to a flat 0% and run the numbers again.

McDonald's performance last year was chiefly affected by the company's admitted menu problems. But the main problem at Yum! remained the China poultry scandal. Yum!'s position will appear stronger if those China comps growths at the very least flatten.

Foolish final thoughts
Yum! Brands has come a long way since its days with Pepsi. But the company needs to strengthen the performance of KFC and Pizza Hut domestically and put its Chinese quality issues firmly in the past. The segment reporting changes in the first quarter will change the overall comps picture due to the melding of U.S. and YRI plus the addition of India. But it's important to look at the details behind the numbers.