AT&T (NYSE:T) reported earnings after yesterday's market close that missed analyst expectations. This, combined with poor economic releases in the U.S. and China, is weighing on the Dow Jones Industrial Average (DJINDICES:^DJI) today. As of 1:30 p.m. EDT the Dow is flat. The S&P 500 (SNPINDEX:^GSPC) is also near breakeven, down just two points to 1,877.

There were two economic releases in the U.S. today and one in China.

The U.S. flash PMI was little changed from March and still indicates that U.S. economic activity is growing slowly. The HSBC China flash manufacturing PMI rose in April but slightly missed expectations of 48.4. The slight rise to 48.3 indicates that the economy is continuing to slow, but at a slower rate than in March. Last week the Chinese government reported that GDP grew at a 7.4% seasonally adjusted annual rate in the first quarter, beating analyst expectations of 7.3% but missing the Communist party's target of 7.5% growth. China is going through a credit and property bubble, which is weighing on the economy as more resources are diverted to pay for the massive amount of debt the country has built up. The major question is how the Chinese economy will work off this debt and what effects this will have on the rest of the world. The Chinese people are confident that the party can engineer a soft landing, but economies are impossible to control, and efforts by the party look more like a delaying of the inevitable than a solution.

Meanwhile, the new-home sales report showed that new-home sales dropped 14.5% month over month to a seasonally adjusted annual rate of 384,000 -- well below analyst expectations of 450,000. 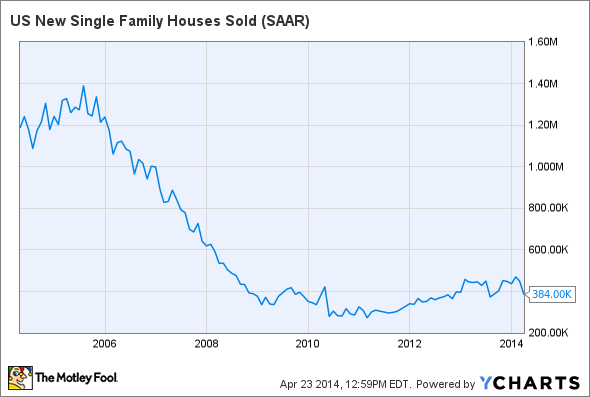 The report may not be as bad as it looks at face value, however; sales and construction were constrained over the past few months by the harsh winter. Still, some economists argue that this report reflects a bigger problem. Last week economists from Fannie Mae and Freddie Mac both lowered their expectations for the housing market for 2014. This report gives credence to their views and shows that the U.S. is likely in for another year of slow growth.

Also weighing on the Dow Jones today is AT&T, which is down 3.3% to $35.08 after reporting earnings yesterday. The company reported earnings per share of $0.71 excluding one-time items, beating analyst expectations of $0.70. Revenue of $32.5 billion beat expectations of $32.4 billion. The company added just over 1 million new subscribers.

AT&T has been in a mini pricing war with T-Mobile, which was the first to allow its customers to separate their monthly device payments from their service payments. The advantage to this is that if you bring your own phone, or pay off the cost of your phone, you only have to pay for the phone service and data you use, rather than still paying one bill that includes the high cost of phone subsidies. AT&T started its own program, called Next, to compete with T-Mobile's offer. AT&T reported that 40% of its customers who upgraded phones in the quarter used its new Next plan, which was better than analysts expected.

The reason the stock is down today is that the company raised its guidance less than investors had expected. For 2014, AT&T now estimates it will show revenue growth of 4%, but it left unchanged its guidance for 5% EPS growth and free cash flow of $11 billion. At that level, AT&T trades at a free-cash-flow yield of 6% -- a high price for a company that could well be facing a pricing war by year-end, challenging those cash flows.