Up then down...way down
The Endocyte rollercoaster screamed downhill after the company stopped a late-stage trial comparing vintafolide with Doxil to Doxil alone. Data available at the interim futility analysis failed to show significant improvement of progression-free survival among ovarian cancer patients in the vintafolide arm. 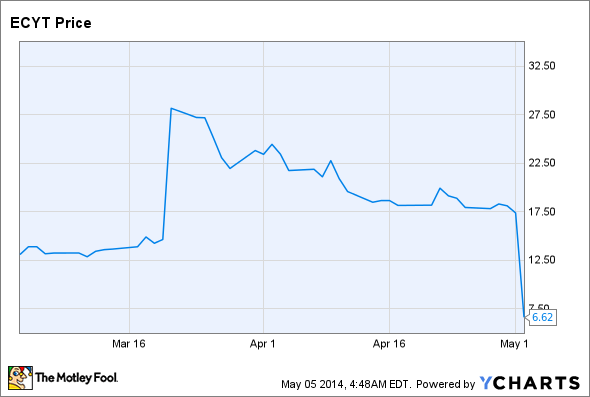 About two years ago, Merck paid $120 million upfront for vintafolide. At the end of 2013, Endocyte was still eligible to receive $875 million in milestone payments across six cancer indications. Friday's announcement dashed away Endocyte's chance of receiving some of those payments, but a glimmer of hope for the program still remains.

In March, European regulators recommended a conditional marketing authorization for vintafolide in the treatment of ovarian cancer. If the EC follows the recommendation, vintafolide might get a chance to prove itself in the marketplace.

Endocyte didn't wait for a decision to cash in on the recommendation. In early April, Endocyte completed an offering at $21.00 per share and received net proceeds of about $101.8 million in the process.

Can custirsen still deliver?
Shares of OncoGenex fell more than 60% after its lead compound failed a hyped phase 3 study. Its lead compound custirsen is supposed to block clusterin -- a protein thought to play a role in cancer cells' resistance to treatment. Unfortunately, adding it to the standard first-line therapy of docetaxel/prednisone didn't significantly improve overall survival in men with prostate cancer. 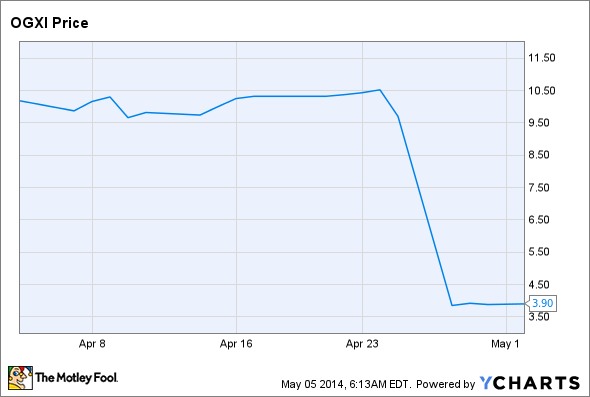 Luckily, there may be other opportunities with custirsen. A prostate cancer trial designed to measure survival benefit of custirsen in combination with cabazitaxel as a second-line chemotherapy is still enrolling patients. Another outcome trial testing custirsen in combination with docetaxel as second-line chemotherapy is also enrolling patients with non-small cell lung cancer. There may be opportunities there, but the failure of the one trial is a pretty big concern.

More opportunities
The Endocyte and OncoGenex failures were somewhat surprising, but Athersys' failure wasn't as unexpected. Athersys' MultiStem cell therapy failed to significantly benefit ulcerative colitis patients resistant, intolerant, or unresponsive to previous therapies. In effect, Athersys tried to prove a single dose of its off-the-shelf stem cell therapy could help otherwise untreatable (read: difficult to treat) patients, and the stock was punished when that failed. 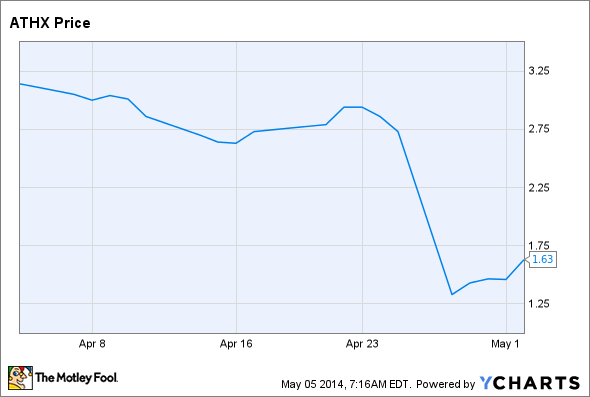 In fairness to Athersys, the trial was conducted by Pfizer, which licensed the therapy for bowel disorders. MultiStem was well tolerated, and the trial is still under way with multiple secondary and exploratory endpoints. With luck, those results might encourage Pfizer to take another shot.

Beyond bowel disorders, Athersys has a lot planned for MultiStem. The stem cell therapy is in an ongoing phase 2 trial with ischemic stroke victims. It has also completed phase 1 trials with both heart attack and graft-versus-host disease patients. With just $32 million in cash, carrying out those plans will require lots of help. After this failure, I don't know if many deep-pocketed partners will heed the call.