After retreating from record territory yesterday, the Dow Jones Industrial Average (DJINDICES:^DJI) could be in for weak start today. The index fell 26 points in pre-market trading, suggesting a lower opening for stocks. World markets were mostly in the red overnight, with Asian shares falling by 0.6% and Europe's Stoxx index down by 0.4% as of 8:30 a.m. EDT.

Stocks could find some direction from today's fresh reading on the job market. Automatic Data Processing's latest employment survey this morning showed a gain of 179,000 jobs in May, which was below the 210,000 that economists had expected. That pace of payroll growth is consistent with the slow but steady progress seen over the last year, but points to a potentially weak official reading from the Department of Labor on Friday. 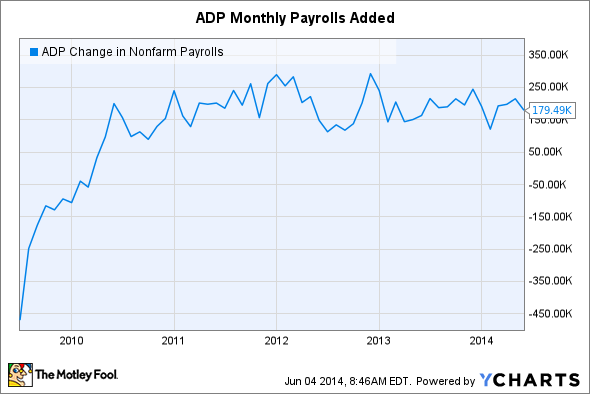 Meanwhile, news is breaking this morning on UnitedHealth (NYSE:UNH) and TIBCO Software (NASDAQ:TIBX) stocks, which should both see heavy trading in today's session.

Dow insurance giant UnitedHealth today announced a 34% hike to its quarterly dividend payout. Starting with this month's dividend, shareholders will receive $0.38 in cash for each share that they own, up from the $0.28 paid last year. That boost puts the company's quarterly payout at an impressive 80% higher than it was just two years ago. UnitedHealth also replaced its expiring share repurchase authorization with a new 100-million share target. Chief Financial Officer David Wichmann explained the moves in a press release, saying, "As we serve more people in increasingly diverse ways across health care, we are also able to grow our business and return more capital to shareholders." UnitedHealth's stock was unchanged in pre-market trading.

TIBCO Software shares fell nearly 13% after the company announced preliminary fiscal second-quarter results last night. The infrastructure and business intelligence software company said it expects surprisingly low revenue of $250 million and barely $0.01 of profit. Behind those weak results was a shortfall in demand for Spotfire, one of TIBCO's biggest products, the company explained. TIBCO plans to officially release its second-quarter results on June 19.