Seadrill (NYSE:SDRL) recently reported surprisingly good first-quarter results. There was a lot to like in the report, including that Seadrill beat estimates and raised its dividend. However, with so many highlights there was one really interesting tidbit from the quarter that most investors likely missed. Let's consider at the area that was easy to overlook, but important nonetheless.

Delays in the newbuild program

Seadrill has been aggressively adding to its drilling fleet, with 19 rigs under construction. However, as part of the industry slowdown, Seadrill has decided not to build any additional rigs until there is more certainty in the market.

In the meantime, Seadrill is running into problems getting its current fleet of newbuilds completed. The company noted that the high volume of deliveries taking place this year is causing shipyards building its fleet to fall behind schedule. The West Saturn and West Carina drillships will be delayed up to six months from the original scheduled delivery date, according to the company's earnings report. In addition, according to Seadrill a few more of the four ultra-deepwater drillships scheduled for delivery in the second half of next year could also be delayed by up to six months.

This is interesting for a number of reasons. First, these ships represent future income growth for Seadrill, so delays in completing construction would be delays in earning revenue. On the other hand, given the issues in the drilling market, these delays actually couldn't have come at a better time, as now Seadrill has more time to get these rigs under contract. One has to wonder if Seadrill just lucked out here or if maybe it told the shipyards not to rush its orders. The company did note that it has contractual rights for late-delivery compensation in case of a delay, but that doesn't necessarily mean anything in this case.

Contract backlog was a bit worrisome
Another reason these delays couldn't come at a better time is because the slowing offshore market was starting to weaken Seadrill's backlog. At the end of the fourth quarter, Seadrill's backlog for its floater fleet stood at $15.5 billion: 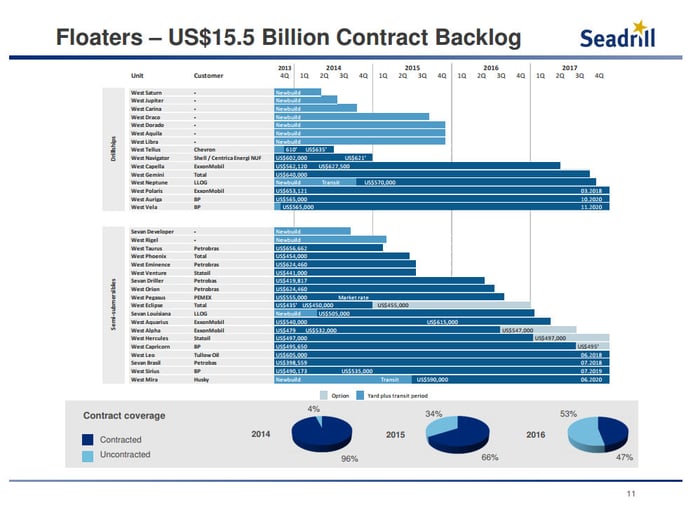 As that slide notes, the company's uncontracted backlog for 2014 stood at just 4%, but it was expected to widen to 34% next year and 53% in 2016. However, just this week, Seadrill signed a five-year, $1.1 billion contract with Total (NYSE:TOT) for the West Jupiter. The deal secures a $600,000 dayrate for a ship that will be completed in August and helps to erase some of that uncontraced backlog.

The backlog had become worrisome because before securing the Total deal, Seadrill ended the recently completed first quarter with a total backlog of just $14.1 billion, as the next slide shows (though it is now up to about $15.2 million when adding in the contract with Total):

Because the company did not sign any new contracts or extensions for its floater fleet in the first quarter, it burned through $1.4 billion worth of its backlog. That was very worrisome for the company as the backlog is what helps secure Seadrill's dividend. The good news of course is that the Total deal helps ease some of those worries, but its still an area investors need to watch.

This is why a delay in the arrival of the West Saturn and West Carina, as well as the bulk of next year's newbuild drillships, isn't necessarily a bad thing for Seadrill at this moment. The fact that just seven rig years' worth of ultra-deepwater contracts were awarded in the first quarter, the lowest since the financial crisis, points to just how bad the market is these days.

Meanwhile, new rig contracts are coming in at lower dayrates. For example, Transocean (NYSE:RIG) recently announced that it secured several new contracts. Transocean saw the dayrate for one rig fall from $606,000 all the way down to $360,000 to drill a small three-well contract. The driller was also awarded a two-year contract extension in the U.K. North Sea that saw that rig's dayrate fall from $447,000 to $430,000. Finally, Transocean received a three-year contract for a drillship in Brazil, but the dayrate fell from $510,000 to $440,000. This secured but lower revenue from its ships is a muted positive, to say the least.

Investor takeaway
Seadrill appears to have lucked out in that some of its newbuild ships won't be ready on schedule. The market is weak enough right now that those ships might have been used in less-than-desirable contracts. While the situation delays delay the company earning money on the rigs, Seadrill hasthe potential to sign better contracts in a few months once the market firms up. In the end it could actually come out ahead.