T-Mobile (NASDAQ:TMUS) is not a Dow Jones (DJINDICES:^DJI) stock. Neither is Sprint (NYSE:S). But the two nationwide wireless network operators can most certainly move the blue-chip index from the outside looking in. The dynamic duo is planning to merge into a third megascale wireless competitor, and if that happens, Dow members AT&T (NYSE:T) and Verizon (NYSE:VZ) will most certainly feel the pinch.

In market-moving news today, anonymous sources told both Bloomberg and The Wall Street Journal that merger talks between Sprint and T-Mobile are nearing a final signature.

Such merger talks are not new. Sprint Chairman Masayoshi Son has been very public about his desire to build scale by joining forces with T-Mobile. At the other end of the proposed combination, T-Mobile CEO John Legere could use Sprint's capital to continue his assault on consumer-hostile industry practices.

"What's important for the U.S. industry is the change that the maverick is creating," Legere said in a January interview with NPR. "That's T-Mobile."

Legere is indeed doing his part to lower consumer costs and intensify wireless competition. Verizon and AT&T have lately been reeling under the assault from T-Mobile's low-cost strategy. The big boys are losing subscribers to T-Mobile, though Legere is burning piles of cash to make that happen. 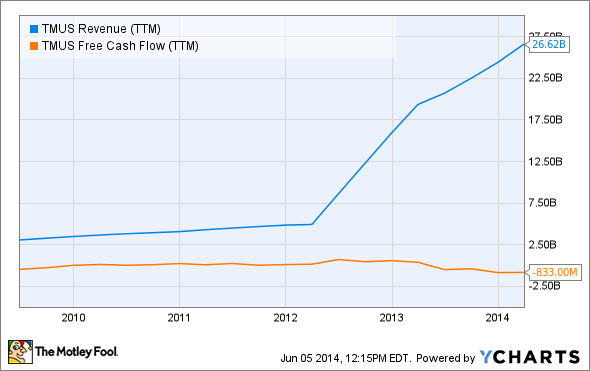 As a direct result, T-Mobile shares absolutely crushed the Dow over the last year while Verizon and AT&T lagged far behind. Legere's investors seem willing to accept tough bottom-line results for a while, as long as new subscribers keep driving solid revenue growth. As for Sprint, which also beat the market over the last 52 weeks, Son's big plans are making up for a lack of current success. 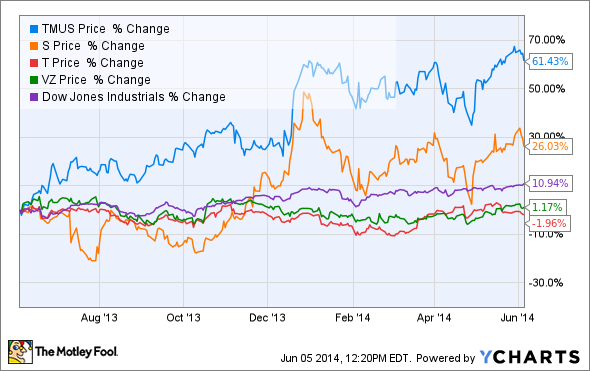 Combining Son's bottomless pockets with Legere's radical tactics would shake up the American cell phone market something fierce. The two have worked together before, when Legere led long-haul data network Global Crossing, which is partly owned by Son. Moreover, Legere worked under Sprint CEO Dan Hesse at AT&T in the 1990s. A three-way reunion of sorts, T-Mobile plus Sprint would create a third major carrier with comparable scale to the giants on top but a much hungrier business attitude.

Legere allegedly insists on running the combined business, after all.

Softbank owner and Sprint Chairman Masayoshi Son is smiling now, but will he be this happy with a real T-Mobile merger on the table? Only time will tell. Source: Sprint.

Sure, both AT&T and Verizon are trailing slightly behind the Dow's generous gains in afternoon trading. You could argue that investors are feeling a little bit of pressure here. But Sprint shares were down 3.9% at 2 p.m. EDT and T-Mobile dropped 2.8%.

T-Mobile shares already sit about 15% below the suggested $40-per-share Sprint offer. Maybe investors fear that the merger never will pass regulatory muster, or that Legere would simply consume Son's capital infusion with nothing to show for it.

All legitimate concerns, I suppose. But among the major industry mergers on the table right now, this is the only one that makes sense for American consumers. Son has promised an all-out price war if he gets his hands on T-Mobile, Legere would be happy to deliver the goods, and three giants would experience fiercer competition than the current structure of two titans and a handful of ants around their feet.

Maybe this is the buy-in opportunity T-Mobile and Sprint investors have been hoping for. There are no sure things in business, but this proposed merger is getting me downright excited both as an investor and a consumer. Add the four national telecoms to your Foolish watchlist so you can keep a close eye on the brewing revolutions.