It's been six and a half years since the American workforce last set an employment record. That record, of 138.365 million nonfarm employees, grew further and further out of reach as the United States plunged into a terrible recession. Then, as the recovery chugged along with underwhelming speed and strength, it began to seem that a new record might take a record-breaking amount of time to arrive. Our new record-high jobs tally announced today, at 138.463 million, has indeed taken far longer than any postwar recovery to claim its new high. At 76 months, it surpasses the four-year recovery from the dot-com collapse by over two years. Nonetheless, here we are: 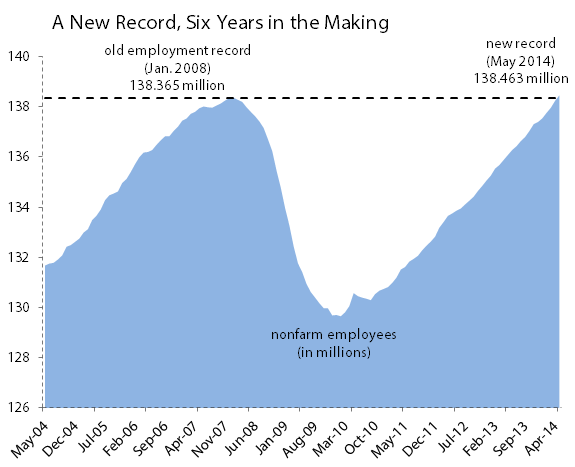 The official May jobs report from the U.S. Bureau of Labor Statistics finally pushed the nation over the top, showing a gain of 217,000 jobs, which came in ever so slightly ahead of economist and analyst expectation for an increase of 215,000 new jobs. This is roughly in keeping with a clear trend over the past few years of roughly 200,000 new jobs per month, as you can see when examining the three- and six-month rolling average for job gains against the month-to-month additions: 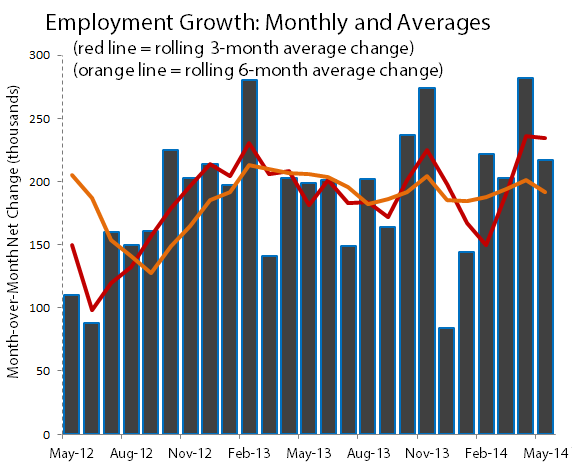 Since this report is more or less as expected, American markets are reacting with typical modesty. The Dow Jones Industrial Average (DJINDICES:^DJI) was up nearly 0.5% in late trading, with only one component trading (Pfizer) a full 1% lower than it opened the day. This is still better than previous reactions -- a narrow miss in March's jobs report prompted a similar percentage decline in the Dow.

However, the big jobs picture looks much different today than it did six years ago. For one thing, there are nearly 15 million more people in the United States today than in 2008. But there aren't quite that many more people ready to work, as the total labor force has only grown by 1.6 million people since the last employment peak: 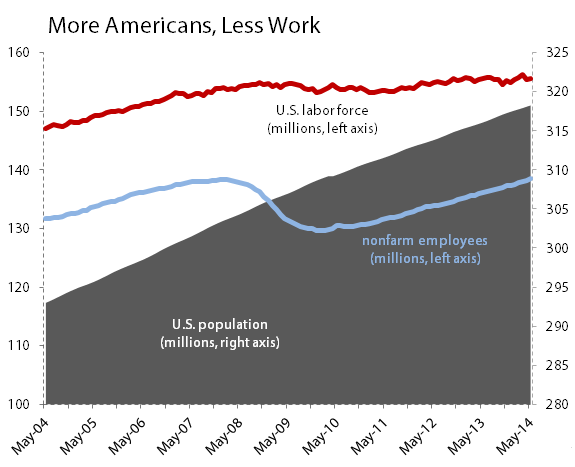 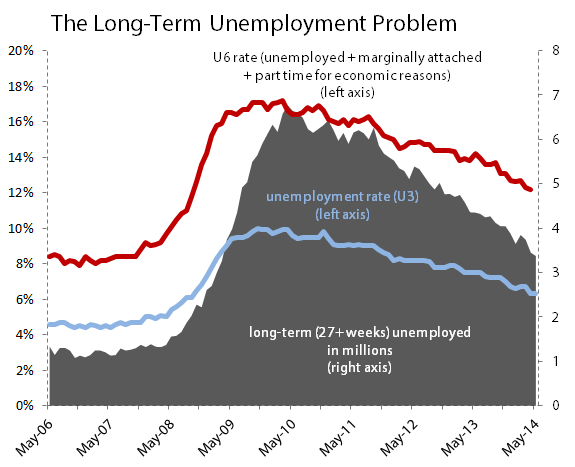 Contrary to recent claims that we're not becoming a "nation of part-timers," there are 2.2 million more part-time jobs today than there were in 2008. And what about full-time jobs? There are 2.7 million fewer of those today than there were at the last employment peak. As a result, part-time workers now account for 17.5% of the labor force, up from 16.3% at the previous peak. During this time, participation in the labor force plunged from 66.2% in 2008 to 62.8% as of May: 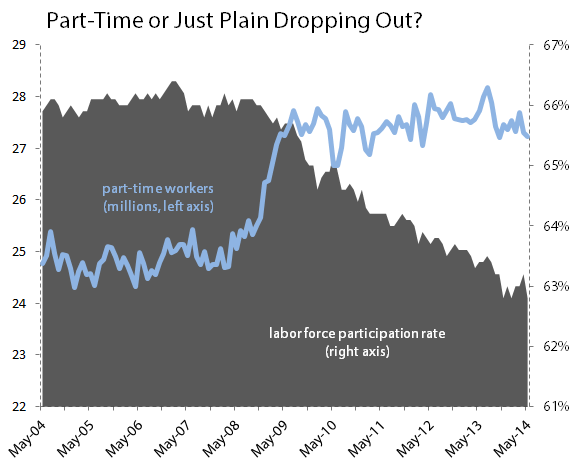 Health care may not be known for its part-time workforce, but the BLS counts a number of low-paying "aide" positions as part of that sector, and the 3-million-plus-strong nursing workforce has historically been anywhere from 20% to 25% part time. The leisure and hospitality segment, which counts restaurants, bars, hotels, entertainment venues, and the like as its primary places of employment, boasts by far the shortest average workweek, at just 26.1 hours per week as of this May. In fact, the third-shortest average workweek belongs to the combined health-care and education sector, which keeps its employees busy for an average of just 32.8 hours a week.

Let's look at changes in employment among the economy's largest sectors now: 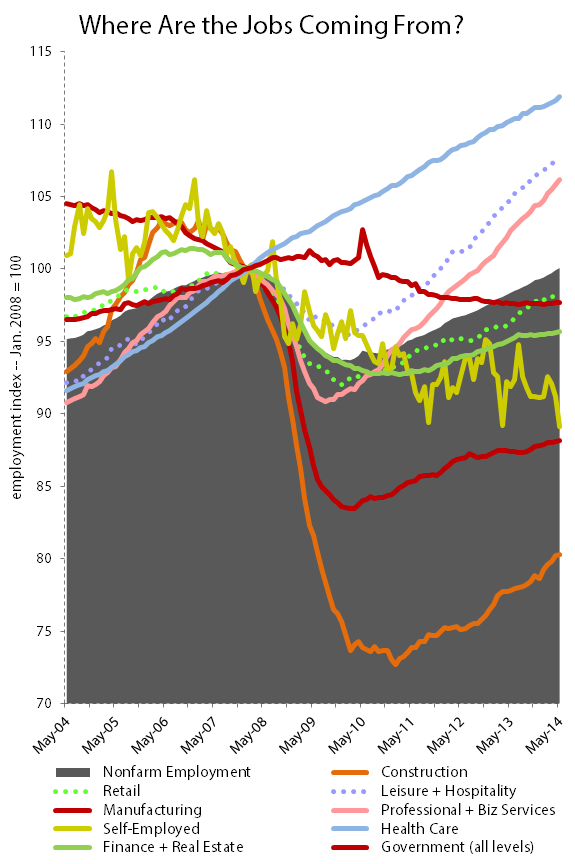 The crash in construction is by now well known, as is the manufacturing contraction. These fields employed their workers for an average of 38.9 and 41.1 hours per week in May, respectively, and since the 2008 peak they've shed a combined 3.1 million jobs. Workers in both of these sectors made more per hour last month -- the average construction worker made $26.59 per hour, and the average manufacturing employee took home an hourly wage of $24.72 -- than did workers the two fastest-growing sectors, as the education-and-health-care sector reported an average hourly wage of $24.63, while the average leisure and hospitality sector employee brought home a paltry $13.78 per hour.

The American workforce set a new record. It was nothing to celebrate. By nearly every measure, the American workforce is in worse shape today than it was in 2008, before everything fell apart. Millions remain unemployed; millions are stuck in part-time jobs; millions more have simply given up altogether. Solving these problems will be cause for celebration. Today, we'll have to take what we can get.