Is it time to insert Apple (NASDAQ:AAPL) into the Dow Jones Industrial Average (DJINDICES:^DJI) -- and what unfortunate ticker would the consumer electronics giant replace? Let's talk about that.

Apple is the most valuable company in the world. With a $560 billion market cap, Cupertino runs nearly 30% above second-place market cap giant ExxonMobil. The company is as American as apple pie, is the epitome of sustained growth, and hits every criterion for inclusion in the index.

But the Dow also happens to be a price-weighted index. Apple's sky-high share price has arguably kept this blue-chip stock off the premier blue-chip index, lest the Dow turn into a slightly diversified proxy for owning Apple shares.

Just how heavy would Apple's current price be?
Let's say Apple was added to the Dow today, without removing any other index components and expanding the 30 tickers to 31. Apple would then account for 19.8% of the average's total weight.

The highest-priced stock on the Dow as we know it, Visa, only owns 8.1% of the total index weight. Kick that ticker out and put Apple in its place, and Cupertino's dominance would grow to 21.2%.

In other words, Apple's high share price guarantees that this single stock's price moves would account for about one-fifth of the Dow's total value changes.

What will this weekend's stock split do about that?
Apple is splitting its shares over the weekend, removing that huge price obstacle to Dow membership. Each Apple share you own today will get six new friends when Wall Street opens for business on Monday.

The 7-for-1 split will drop Apple prices to roughly $93 per share, which is just above the median and average Dow prices these days.

At this price, Apple would only control between 3.4% (by just adding it to the index or removing any one of four currently lowest-priced Dow stocks) and 3.7% (replacing Visa) of the Dow's value changes. That's not at all an outrageous amount of influence, given that the average sway among 30 class members works out to 3.3% by definition.

Apple will finally meet every conceivable benchmark for Dow membership, and I'd imagine the steering committee will feel some pressure to make that move fairly quickly. Maybe not right away, but I would certainly expect an announcement in the next few months.

So who's heading out?
One criteria the Dow uses to select new stocks is "adequate sector representation."

Apple generally falls in the technology sector. At least six of today's 30 members already belong to this market segment, and you could make a tech-heavy case for another three.

I agree that technology is a very important slice of the American economy today, but it would be hard to justify increasing this large tech-stock ratio even further. And when the Dow removes components by its own volition, it goes for low-priced stocks. In last year's shake-up, for example, "changes were prompted by the low stock price of the three companies slated for removal," according to S&P Dow Jones Indices.

That leaves us with two obvious candidates for replacement when Apple comes a-knocking:

Both Intel and Cisco are shifting gears in a big way right now, while it's business as usual for Apple.

Intel still makes a killing in the server market, but desktops and notebooks are fading fast. The chip titan may never enter the smartphone and wearable computing segments, though Intel is finally making some headway in tablets. The company is investing heavily in mobile products and Internet of Things opportunities, and these billion-dollar expenses have forced some budget rebalancing. Intel's dividend has not grown in the last two years.

Cisco wants to diversify away from enterprise-grade networking. Revenue growth is coming from new markets including server systems and (again) networking components designed for the Internet of Things or mobility.

Both companies are feeling pressure on their earnings and cash flow results, and investors aren't feeling the love they used to. Intel and Cisco have underperformed their Dow peers dramatically over the last decade: 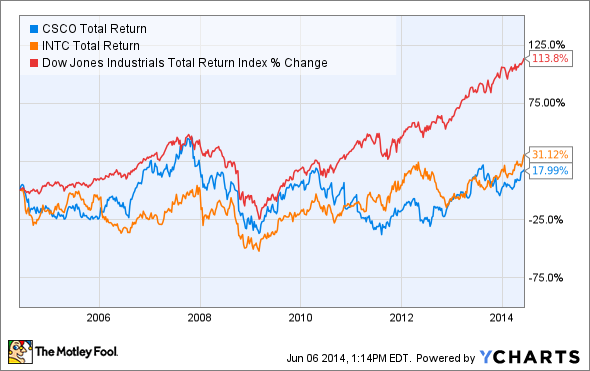 So would it make sense for the Dow to replace Intel or Cisco with Apple? I think so.

It's impossible to find a bluer chip than Apple right now. Sure, the company has struggled to find new markets after introducing the iPad in 2010 -- but Apple is still growing and nobody can match this company's profitability. Plus, it would make the Dow committee look smart to introduce this megacap colossus now that it's a serious option.

It wouldn't be a risk-free choice, of course. Intel and/or Cisco could actually pull off their planned turnarounds in the long run and Apple could fail to reinvent itself. There's a real risk that the Dow would trade high future returns for a lesser light, and ultimately shave points off its own long-term value.

But it was never the Dow's purpose to maximize returns. The index aims to reflect the American business climate, and sometimes that means moving down a few pegs.

All things considered, there's no reason to keep Apple out of the Dow any longer. The index managers need to pick either Intel or Cisco for deletion, and it might come down to just erasing the lowest-priced company when the announcement is made. That would be Cisco today, but would have been Intel as recently as last November.

Stay tuned, because Apple needs a seat at the big table and this two-ticker choice could go either way.

Apple Inc. Needs to Join the Dow -- So Who's Out? @themotleyfool #stocks $^DJI $AAPL $INTC $CSCO Next Article
Current