The major U.S,. indieces have pulled back from earlier spikes, with the Dow Jones Industrial Average (DJINDICES:^DJI) just under breakeven as of 2:30 p.m. EDT and its member stocks split starting to lean more heavily toward losers for the day. Merck (NYSE:MRK) led off the week with a buyout that is shaking up stocks around the health-care sector, while outside of the Dow, Tyson Foods (NYSE:TSN) made its own substantial acquisition. Let's catch up on what you need to know.

Merck and Idenix make a match
Pharma major Merck surprised Wall Street today with its $3.85 billion buyout of biotech Idenix Pharmaceuticals (NASDAQ: IDIX). While Merck has pushed its pipeline forward in 2014, Idenix boasts research and development into one of the hottest markets in pharmaceuticals today: hepatitis C. Analysts estimate that the oral hep C market could be worth $20 billion, and Gilead Sciences' (NASDAQ:GILD) Sovaldi, the first approved oral drug for this market, reeled in more than $2 billion in revenue during its first quarter alone. With potential like that up for grabs, Merck wants its piece of the pie -- particularly given that Gilead's stock has outperformed many other big biotech stocks behind Sovaldi's success. 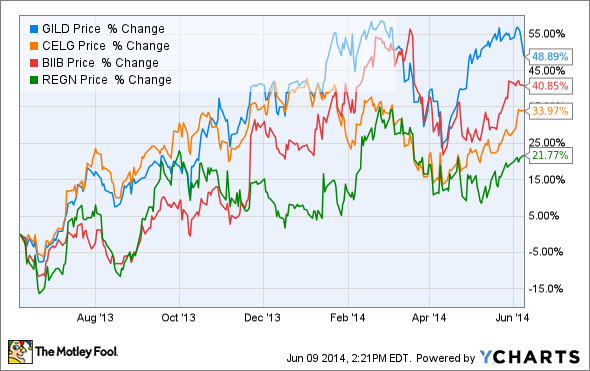 Yet it won't be as easy as simply buying Idenix and bringing in the cash, and potential challenges ahead have left Merck's stock hanging flat on the day so far. Idenix has struggled with safety issues over drugs, and while the company has multiple hepatitis C drugs under development, analysts have pegged it behind leaders such as Gilead and AbbVie in the race to capture market share. Merck's far greater resources should help, but this company will have to contend with industry heavyweights in this competition. So far Idenix's current drugs under development have avoided any safety issues, but investors need to watch for how these candidates develop.

Even Gilead has come under fire lately, despite owning the first-mover advantage in this market. Critics have circled Sovaldi's hefty price of $84,000 per 12-week course. While Sovaldi and other drugs contending for this market aren't in danger yet, investors should keep an eye on whether companies will lower prices in order to compete. Wary of possible competition from Merck's latest move, along with AbbVie and other competitors, analysts have fled from Gilead's stock today, sending shares of the big biotech down 4.2%.

Merck's not the only major stock making buyout-related waves today. Tyson Foods topped rival Pilgrim's Pride in the battle to buy Hillshire Brands. Tyson reportedly will pay nearly $8 billion for Hillshire, which it hopes will beef up its breakfast lineup and prepared foods portfolio. As a result, Tyson's stock has plunged by more than 6% so far today. Jimmy Dean and Hillshire's other brands certainly will give a boost to Tyson a boost, which will become the No. 2 player in the frozen-foods niche. The company expects to generate $300 million in synergies from the first three years following the deal's close, so there's an opportunity here for long-term investors looking to make the most of the big buyout.